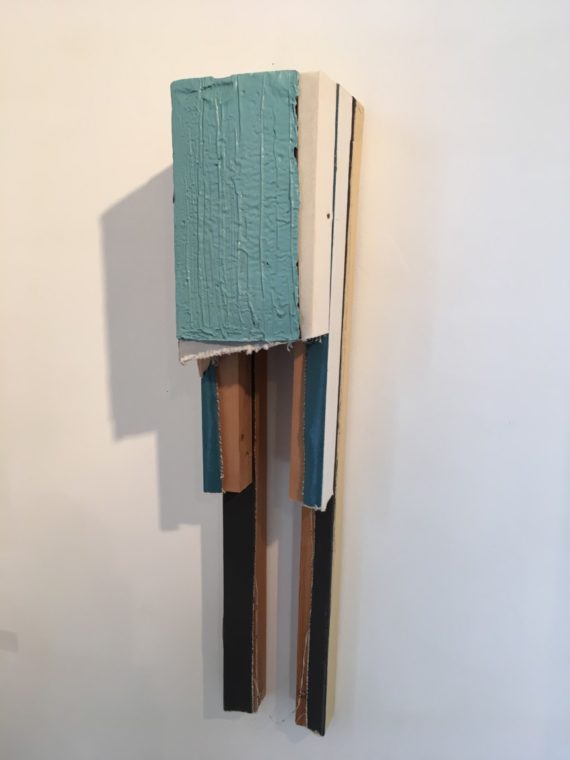 Flotsam and Jetsam by Peter Symonds is a show of questioning. It asks us some fundamental questions about the nature of painting, the role of spatial depth and illusion, alongside the parameters of its production – stretcher, canvas, edge, brushstroke, stain and paint. The material of the works are paintings, often reworked, broken up or completely refashioned with a chop saw. No attempt has been made to hide this process of recycling. For example, in Corroboree the right hand element is tattooed with a diagonal line of red marker pen that records the intended angle of the saw cut that dismantled the painting.

In Symonds realm, stretchers are no longer means to an end, but become structural elements in themselves. Constructed brushstrokes if you like. Canvas is less a substrate for paint and more a means to hold pieces of the now sawn stretcher together. Sometimes, one side of a stretcher has been cut in sections and then folded over on a slant as in Sail, 2016. The staples previously used to fix the canvas now punctuate the object’s aesthetic.

Torn away canvas leaves thin strips protruding over the bevelled edge of the stretcher to create a shadow, but also space. In so doing, it is less theatrical than the dramatic slashes that split Lucio Fontan’s canvas into what he described as Concetto Spaziale or Spatial Concepts. Symonds cutting of the canvas is more matter of fact, and moreover it is brutally emphatic. His works are at the most adventurous when the destruction of the canvas becomes an integral part of the process of painting.
Highly successful is the somewhat anthropomorphic Totem, 2016; its ‘legs’ ever so slightly inclined towards convergence. Perhaps this is merely an illusion, but given the stretchers of other previously parallel canvas in the show have been compressed to narrowing angles, one begins to question what is straight and what is at right angles. Crafted from three layers of old paintings and reinvigorated with a slab of sky blue thick impasto on the remaining section of the outermost canvas. This, is an exciting and multifaceted work.
The layering of multiple canvases continues with Derelict, 2016. 3 square previously painted canvases are now conjoined into a slab that has been installed low down into a corner of the gallery. Perhaps a nod to Tatlin’s Corner Relief. The uppermost painting is upside down; meaning you see the rear of its canvas. Beneath, the other two paintings have been fixed face to face to hide the planes of imagery. Again, this is another playful tease; questioning, what is painting? What might it be?
Even seemingly conventional paintings such as Tide operate at the margins of normality. The stretcher’s top edge has been shaved from the rectilinear to make a concave arching indent. Accordingly, the picture plane now recedes towards the wall. No longer flat, the distorted substrate geometry serves to accentuate the curved lines of brushstrokes, as the paint is drawn over the canvas. Hence the marine inference of the title.

In other deliberately conventional ‘paintings’, accumulations of paint sit on the edge of the canvases, partially masking the underpainting. Even so, glimpses of turps stains and pigment drawn down the sides of the stretchers give away the multi-stage process of making.

On viewing this exhibition, one is drawn to question whether Symonds’ objects are sculptural paintings or painted sculptures? In a way they are a hybrid of neither; rather they constitute paintings transformed. So perhaps ‘Object Paintings’ surmises their constructed nature and how in their installation, they often relate to and reveal features of their architectural surroundings. Indeed, Symonds’ whole process is an act of revelation. What originally was hidden becomes visible. The screws and nails of construction, joints and timber cross members, all previously hidden behind canvas, are revealed in the switch from back to front or as paintings are literally cut up or ripped to pieces. This is a show that confirms the vibrancy of painting when the proponent is prepared to task risks with the conventions of its language. Flotsam And Jetsam is therefore well worth the trip to see how this artist seeks a new vocabulary for this age old medium.