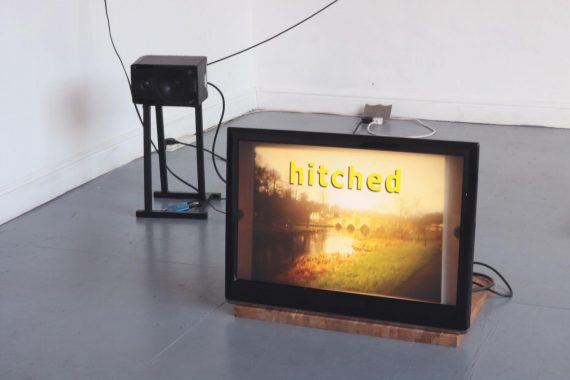 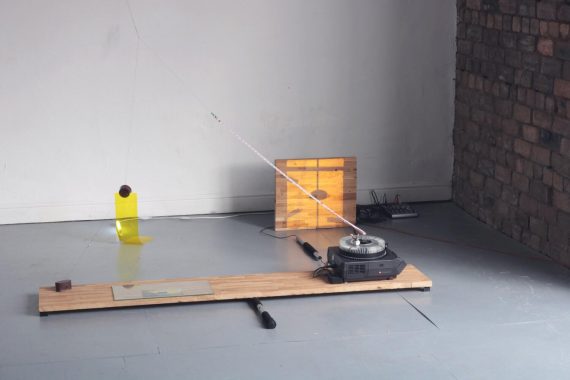 Open for a couple of days, this short show was the output of a 3 month studio residency by artist Richard Taylor. Walking into the space, to the left was a mixture of both analogue and digital solutions for viewing images. From the devices stretched cables carrying the sound output to speakers. The cables reached out across the room, exploring and mapping the space. It was clear there were many different strands of ideas being explored here in this installation. A 35mm slide projector churned its way through a carousel of slides. A flat microphone picked up the vibrations as it changed slides and it’s noise was amplified and sent to a speaker half way across the room. The images being shown here were acquired by Taylor and ‘stolen from the wardrobe in his dad’s bedroom back in Derbyshire. An archive of images taken by his late grandfathers in the early 1980s, before he was born.’  Nowadays the democratisation of the image, mainly through internet through technology has resulted in a complete global saturation of images. In the future, the retrieval process for images will certainly not be to look through the house, but to look through the internet as this is probably where they will only ever exist in digital format.

Taylor’s installation invited the audience to ask such questions about images. The flat microphone sat on the 35mm slide projector like a physicians stethoscope, listening and searching for vital signs of life. The amplified noise that filled the room affirmed that there was still life and interest yet in what may now be perceived as an archaic format. With a system in place that continually pushes for and promotes higher and higher resolutions in visual images, coming across a slide projector is like being reunited with an old friend. Through the forward motion of technology, it is now mostly banished from mind and sight. It is the analogue cousin of the characteristic digital space that Hito Steyerl has described as ‘the poor image’ in her essay ‘In Defence of the Poor Image’. In this essay she also describes how the attainment and pursuit of high quality images has created a system where the poor quality image is now treated as a complete outsider:

The contemporary hierarchy of images, however, is not only based on sharpness, but also and primarily on resolution. Just look at any electronics store and this system, described by Harun Farocki in a notable 2007 interview, becomes immediately apparent. In the class society of images, cinema takes on the role of a flagship store. In flagship stores high-end products are marketed in an upscale environment. (Steyerl:2009)

This perhaps defines the differences between the worlds of cinema / film and the visual arts. Artists are not bound by the same rules of high definition, quality of image and sharpness. As much as it is good to see and realise the nostalgia of Taylor’s images, it is also good to re-experience the fuzziness, over saturation, graininess and discolouration of his found archival material. It is also interesting to see retro technology sitting side by side with digital technology and in this sense, the installation creates a diachronic visual ancestry of technological devices.

At the opening night of the show, the artist carried out a performance that made use of old photographs, that were handed around for the audience to inspect. The feeling of dealing with something from the past and the somewhat sequestered world of the poor analogue image was further re-enforced by the requirement for the audience to wear white archival gloves. The audience interactivity and participation piqued when the artist presented a sculpture that contained small objects that were extracted and inspected, causing amusement and curiosity. A text was then read out to the audience, not written on paper, but read from the screen of a mobile phone.

In a world that is now realising that is is simply un-acceptable to continue throwing everything away, Taylor’s show must surely make us aware that we all have interesting things sitting somewhere in boxes. Despite being distant relatives of the poor image, the things that we find there will always have a relevancy and purpose.