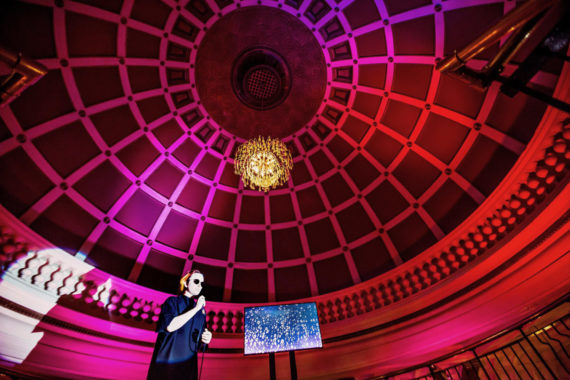 While this year’s Glasgow International has no prescribed theme, the mist that hangs from a number of exhibitions and is whispered in interpretation texts is the so-called Anthropocene; the hyped and undetermined claim that the human species has changed the planet irrevocably, becoming itself a geologic force. Nature is no longer considered decor for detached humans – the two are conjoined, resulting in escalating forecasts of global warming, extreme weather, species extinction and land loss.

In Lars Von Trier’s film Melancholia (2011), the aptly named planet of the film’s title is destined to collide with Earth. This worn-out sci-fi trope is refreshed through explorations of depression, familial tension and love. In the final sequence the ‘alien’ body obliterates Earth. The End. Melancholia’s visual beauty and inevitability was brought to mind when entering the opulent interior of The Savings Bank, the majestic venue for Glasgow-based artist Michelle Hannah‘s multifaceted and dramatic installation, ‘Keener’. Hannah adopts this word from the practice of Irish women singing at funeral wakes, creating an environment that mourns our planetary consciousness and also our corporeality as we grapple with digital and virtual world building.

I was welcomed into the dark space by the artist herself and at first I wasn’t sure where I was, or who she was, real or replicant? Hannah assumes a persona of sorts and throughout the exhibition’s span she embodies the space. Inside the luxurious 19th century interior of the former bank, which now holds functions and events, a winding staircase with red soft-plush carpet leads to a mezzanine beneath a vast planetarium-like dome and chandeliered ceiling. Here, a microphone is set on an intimate, circular stage which the artist takes to everyday during GI. Using performance, video and sound within a spirit of contemporary Romanticism, Hannah questions human identity and use of technology, with references to literature and popular culture. 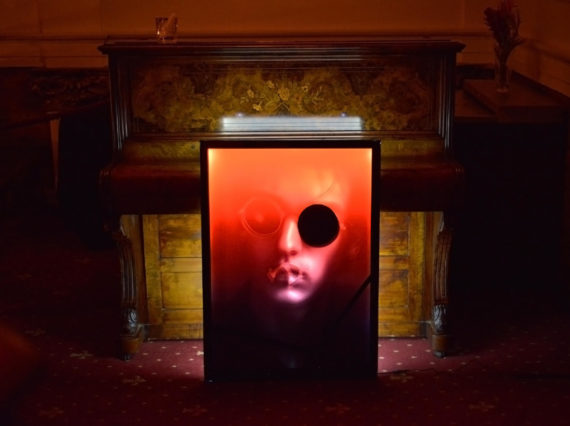 Materiality is important in this scintillating venue, rich in original features and Gatsbyesque excess, indulging us with shiny surfaces and haptic experiences. Hannah does not rely solely on the filmic setting however, and reminds us of the illusions we become seduced by. The artist applies a version of Cosmic Pessimism’s philosophy of the limits to our world and understanding of it. She has constructed an artifice using a ‘dark-matter pop’ aesthetic and the space, although arranged for a party or dance, is filled with a sense of loss. The expected convocation and noisy revelry is met by an absence of pleasure-seekers, and only a drone soundscape that seeps through the space with breathy lyrics such as, ‘Wonder where the damage goes, what is high is now below, render me’. This synthesis between 1920s Jazz Age, Weimar cabaret and post-digital futurity somehow seems to make sense.

In the short video Window Icarus, which uses subtitled poetry and song lyric excerpts from queer ‘stars’ Derek Jarman and David Bowie, a glowing sun creeps closer becoming all-consuming, and then retreats until our life-giving star disappears. Black. The table positioned in front of this ‘view’ is empty, despite the ‘Reserved’ sign. Maybe we are too early? Or the damage is already done? The tug between past and future temporalities is never answered. However, ‘Keener’ is not a dystopian drag into despair and the placing of the work encountered throughout the space adds mysteries to the journey.

You Can Hope Forever also cites celestial bodies and is a laser-etched clear acrylic passage from Dialogue between the Earth & the Moon (1824), by poet-philosopher Giacomo Leopardi, interpreted through John Dee’s Enochian language, supposedly given to him by angels. The cuneiform-looking translation adds a layer of spirituality to the exhibition but also resembles a Morse Code plea to the angels for help. 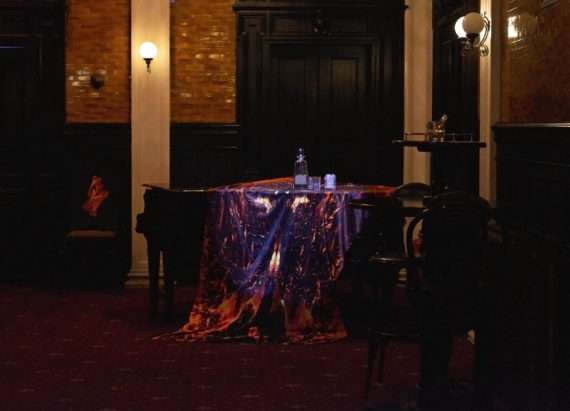 A piano in the corner of the main bar area provides the surface top for the work One Final Measure and is draped with luxurious velvet printed with a YouTube image of volcanic lava. A liquor decanter stands atop filled with silver sand and meteorite shavings, resembling an egg timer that has stopped. The accompanying ‘crystal’ glasses have selenite crystals in them and there’s an empty Calvin Klein Eternity perfume bottle, punning on the fantasy of infinity. These act as props to a potential cinematic rehearsal of one last drink for the road. But it is too late, the bar is closed, the whisky has turned to dust and the ice is rock solid.

A cocktail of references pervades the senses as I explore the immersive installation, appreciating the interplay between different spaces, real and CGI, digital and physical. My old-fashioned, carnal time-warped body is reminded of its eventual demise, and petrified in mourning past time and future prospects. The rendering of the perfect human body is embalmed in Hannah’s digital collages of Calvin Klein advertisement models. In one, a shadow is cast from an unseen figure standing over a svelte sunbather, and this ghostly presence, like the exhibition’s setting symbolising the shadowy financial system, seems to hover over us. Our monetary deposits, and extractions of geological matter, are coming back to haunt us.

Artist and writer Rachel Magdeburg is one of eight a-n members selected for the a-n Writer Development Programme 2017-18. For more information on the writer programme, and to read more of the latest cohort’s work, visit the 2017-18 programme’s blog on a-n.co.uk or use the a-n writer development programme 2017-18 tag