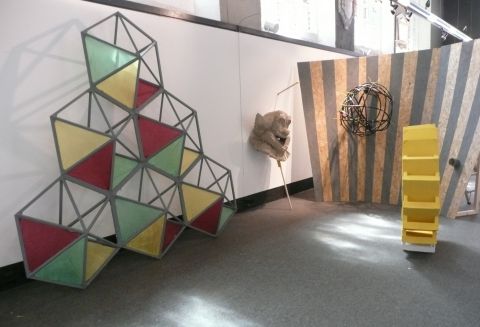 Christina the Astonishing was a medieval visionary who, it’s claimed, levitated to escape the stink of human sin. She’s the focus of a new site-specific work Glissando by Candida Powell-Williams at Salisbury Arts Centre, a venue housed in a deconsecrated 13th century church.

Powell-Williams’ work for this setting draws together the sacred and the profane, the elevated and the absurd. Opening on Christina’s Feast Day (24th July), Glissando invoked the spirit of Carnival with a performance by three female musicians who interacted with and disrupted objects from the show. A collaboration between Powell-Williams and Music Off Canvas, this event re-imagined Christina as a feminist trickster.

The remnants of that performance can still be seen: a toppled sculpture made of painted discs, a broken piñata, a series of flags pegged on a line and three discarded costumes. Scattered with an air of casualness around the theatre space that dominates the arts centre, these and other objects take on the role of incidental props waiting to be activated by absent performers.

Improvised artefacts made from painted cardboard and plywood, coloured tissue and wrapping paper, flimsy fruit crates and rubber gloves, they sit awkwardly in the space, not quite belonging. They seem to highlight the odd contrasts all around. Magnificent stained-glass windows and other remnants of church architecture sit side by side with institutional grey carpet, piped music and the smell of food from the in-house café.

While the eye is swept upwards to the building’s vaulted ceiling, Powell-Williams’ work is firmly earthbound. There’s no attempt to engage with the height of the space, other than by ignoring it. It is defiantly human in scale. This brightly coloured, ephemeral work sits in opposition to the dim grandeur of a church built to last for centuries.

The subject is humankind’s towering ambition, the desire to master the heavens and be closer to God: from the famous 404-foot spire of nearby Salisbury Cathedral to poor Laika the Russian space dog, via local hero Eilmer of Malmesbury, an 11th century monk who made an early attempt at gliding flight and ended up breaking both his legs.

The title of the work – Glissando – suggests something smooth, soaring and elegant but this is bumpy and messy, with all its seams and frayed edges showing. There is plastic tubing shaped with cable ties into a rough orbits; home-made curtaining; a wing-like piece of scenery that visitors see from the back-side first; a mill-wheel approximated from fruit boxes.

If there’s a play to be performed with these props, it’s likely to be one by Samuel Beckett – funny, poignant, cruel, absurd. And you’re in it. To view some of the work, you must get up on a stage in front of all the café customers. Then, if you choose, you can try to eat your own meal off of a crude table and bench that’s also part of the show.

I’m reminded of Phyllida Barlow’s assemblages – there’s an element of child-like play, but also something more sinister. There are things made from other things that look familiar but are strange, items that appear functional but frustrate because they aren’t, and objects that contain a joke you can’t quite get.

Christina the Astonishing may have been mad or she may have been a fraud; she may even have been miraculous. We’ll never know. Looking back at the show, I think about the parallels between art and religion. Both inspire specialist buildings to house their artefacts and rituals, and both share the power to transform everyday stuff into something wondrous. Powell-Williams questions this status and power, and offers us a new bag of tricks with which to test it.