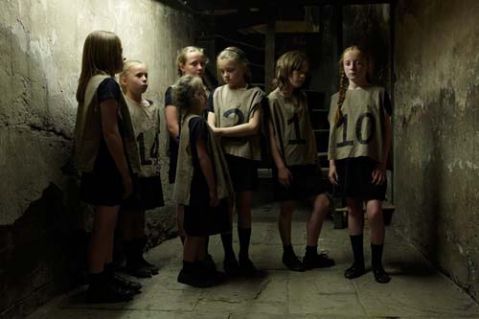 I recently spent a very long day walking the length and breadth of Liverpool. My aim was to see as much of the Biennial as possible. Despite being disappointed by much of what I saw, the notable exception for me was ‘Grand Organ’ by Sarajevo-born artist Danica Dakić. Dakić’s film was a newly commissioned work for the Biennial, shot on location at St George’s Hall in Liverpool. This site was once a court of justice, as well as a place of leisure, and Dakić draws on these aspects, with the help of a cast of local child actors, to create an impressive piece of work. ‘Grand Organ’ was shown at the Liverpool Anglican Cathedral, in a tiny room at the top of a staircase which was so narrow and tightly twisted that I had to clutch the steps for support.

As the film began, I was immediately captivated by Dakić’s haunting, dark and beautiful work. At the heart of the film is the pipe organ of the title. This acts as both a controlling and nurturing force to the children of the work. The children are divided into groups, some with numbers displayed across their chests, but they all remain anonymous. The film contains no clear narrative, instead it is made up of fragments, echoes and repeated motifs, with the children’s voices act as the individual notes of the organ. Dakić has focused on isolated details- running footsteps, organ stops, wooden staircases, concrete walls, the colour of hair and the texture of skin- to tell her story. There is a pairing of symbolic ideas throughout- of stillness and movement, silence and sound, speech and song, darkness and light. The artist references language and relationships, and more subtly justice, power and the class system. I was happy to lose myself within the exquisite and ethereal details of the piece, despite not fully understanding it.

Although the film is actually rooted in Liverpool’s history and architecture, it has an Eastern European feel to it. The geography is therefore a little indistinct and the work feels quite timeless. For me, Dakić’s use of choreographed movement is reminiscent of the films of Russian artist Victor Alimpiev, and the colour palette and definite ‘dark’ qualities of ‘Grand Organ’ work contain nods to Czech artist and filmmaker, Jan Švankmajer, particularly his ‘Down to the Cellar.’

The theme of this year’s Liverpool Biennial was ‘touched’- art with emotional impact. Danica Dakić’s piece certainly fulfilled this brief. Grand Organ was immersive in its content and its aesthetic, it’s details engaging and expressive. The excellent choice of site- a tiny room in the Cathedral at the top of a staircase- echoed scenes from the film, and along with the confines and darkness of the room, it emphasised both the intimate and the powerful qualities of the work to great effect.