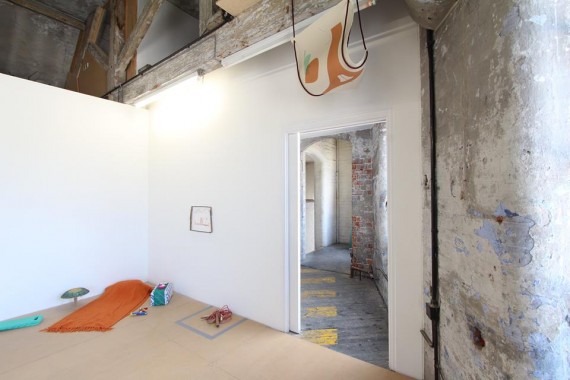 Ground: Amy Pickles and Townley and Bradby
Hosted at ATTIC, One Thoresby Street

Hidden up the seemingly endless, onslaught of stairs of One Thoresby Street, is an apparent anomaly, a seemingly alien, raw MDF floor, oxymoronically titled ‘Ground’. This unusual architectural device acts as a constant throughout the series of exhibitions curated by Alice Gale-Feeny and Oliver Tirré – a stable playing ground upon which artists are invited to bridge the gap between construction and creation, in turn establishing this fascinating, dynamic engagement between the artist and the structure, encompassing the playful ephemerality’s that exist between research and understanding.

Upon entering this space, there is an immediate sense of ‘happening’. Reminiscent of a childhood playroom, Townley and Bradby’s ‘A Game Played In The Gallery On Thursday Morning’ consists of decidedly scattered, colourful arrays of domestic objects and scraps, positioned in familiar layouts, a somewhat adapted interpretation of everyday home objects. The viewer’s navigate this obstacle course of seemingly improvised sculptures with tentativeness, assumingly worried about knocking over one of the many knee high constructions.

I was fortunate enough to have this delicacy broken.

Three kids storm through the crowd, completely out of breath, having obviously completed the race of their life up the stairs, and instantly begin excitedly picking up bits of Lego, adventurously searching through the nooks and crannies (which until that moment I hadn’t realised also contained hidden objects), begging their parents to hurry so as to brag about what they had already found. Propped against the wall is a letter to the curators, the artist duo asking whether they could be supplied with material in order to bring their children in, and create the installation. These events triggered an immediate change in perception, a juxtaposition created between an adult’s preconception and insistence to rationalise and contextualise the art within a professional art context v.s a child’s wonderment that makes sense of the work through the process of tangible experience. Entranced by their excitement, I began to view the world through their eyes, attempting to bridge the gap between logic and whimsy. Townley and Bradby have simply allowed their children to be the fuel to their installation, and in doing so, have created a space for nostalgic wonderment and curiosity, where the domestic and the artist can live as one entity, where professionalism and play can come together.

To the right, ‘A Game Played In The Living Room For Three Hours Spread Over Two Days’ hangs on the wall, a central text documentation of the artists’ children engaging in a conversation whilst creating a ‘cave’ within their living room; a set of painted diagrams of the completed architecture either side. Through the medium of text, the humble naivety of a child is captured, the work in some ways encapsulating snapshot moments of their childhood led by their interactions, acting as a means to create a level of understanding through the process of documentation and research. It is this documentation that relays the experience back to the audience, an interesting method to allow universal comprehension.

Meanwhile, at the back of the space, a repeated, muffled audio can be heard: Amy Pickles’ video ‘A bird flies in from outside through the window’ playing centrally. At first, I found the film a little lost amongst the crowd, the sound absent in between the excited chatter of the opening night. However, her ability to captivate an audience through performance (in the work ‘You opened the window, jamming a hardback between window and frame’), using anticipatory choreographed silence, is a skill to be in awe of. The performers, shoeless entities who had been effortlessly mingling amongst the room, take their position centre stage underneath the white projection that was once Pickles’ film. Sat against the wall in silence, the audience gather instinctively, the children sitting directly in front, immersed in the suspense. The narrative of the film plays unaccompanied, the familiar sound now clearer in the silence of the atmosphere, and from here on, the performers become the entrancing, entangled embodiment of the story. Parallels emerge between the previously shown video and the performance, the dancers each creating their own disjointed symmetry, discovering an individual interpretation, intertwining together, and constructing a sensual contortion which battles between the boundaries of dance and theatre. Underlying their intermittent eye contact with audience members is an intense anticipation of engagement, and sense of communication and relaying information through the process of movement. The artist herself hides behind the guise of the narrator and performers yet somehow remains present within the on-going narrative, a sense of research and longing for understanding evident, delving between anecdotes of a bird, tangents being delved into at a moment’s notice, the audience drifting between concentration and admiration.

The performance ends swiftly, the dancers merging to become one with the crowd, the transient nature of what had happened absorbed by the clean slate of the MDF floor on which the performers translated. Immediately, the children turn to their parents, and begin to roll along the floor as the crowd disperses, an attempt at mimicry of what they had just seen, a child’s pursuit of understanding via physically replicating. I found this a somewhat poetic, cyclical end to a series of events which all began with a humble yearning for comprehension.