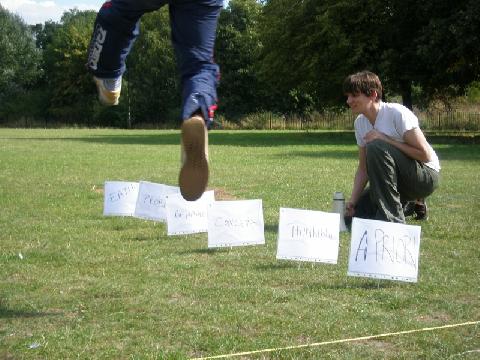 In March of this year, the UK government announced it would divert £675 million of lottery money from funding for the arts in order to offset the costs of the 2012 Olympic Games. This included an immediate £29 million drop – from £83 million to £54 million – in this year’s Grants for Arts budget. The cut is already having a drastic effect on the ability of arts organisations and individuals to plan and make their work.

A number of ongoing efforts have been made to persuade the government to rethink this cut or to make up for it in its forthcoming Comprehensive Spending Review, including an online petition with over 25,000 signatures (http://petitions.pm.gov.uk/lotteryolympics/, now closed) and a coalition of arts organisations under the name Independent Arts (http://independentarts.org.uk). But artist Tim Jeeves has taken an ‘if-you-can’t-beat-em-join-em’ approach with his ‘Grunts for the Arts’ project, which promotes the retraining of artists into Olympic athletes. One of the outcomes of this project was the second ‘Grunts for the Arts Sports Day’ in Burgess Park, London. (The first Sports Day was held in May in the Hackney Marshes, part of the future Olympic site.)

The Sports Day consisted of a number of ingenious versions of typical sporting events, including a gymnastic event with extra points for the competitor’s dramatic death pose, a 20-person relay with each stage only 2m long, an Olympic doughnut ring eating contest, and (my contribution) the Conceptual Leap. The day ended with Richard Dedomenici’s contribution to the evolution of football: ‘Triball’, in which three teams play on a three-sided pitch with three goals and two balls.

The weather was gorgeous, and the whole day was a reminder that both art and sport should be a celebration of collective spirit and local participation, something increasingly lacking in the global branding exercises of the Olympic Games franchise. There were plenty of reflections on the realities of being an artist working in the UK funding system, including an argument over ‘measurables’ during the Handbag Hurling, or the requirement that competitors in the Tour de Park Cocktail Race display not only artistic and athletic prowess but also the ability to sell their product to the assembled crowd. But most inspiring of all was the way in which a few young children and a group of developmentally disabled people joined in with the fun – a reminder of the arts’ ability to spontaneously bridge gaps without any sight of bureaucratic targets or comprehensive strategy papers.

Find out what you can do at the Independent Arts campaigning website: http://independentarts.org.uk