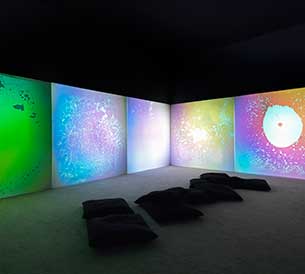 Gustav Metzger is an artist whose name goes before him. He first came on my radar as the co-organiser of the infamous Destruction in Art symposium when he was prosecuted and convicted for presenting an  “indecent exhibition contrary to common law”. After staging  a Herman Nitsch “5th Abreaktionsspiel of OM Theatre. This classically gruesome Nitsch event, involved slaughtered goats ,blood, nudity and sexual imagery.  Bearing in mind this all took place in 1966. It is fair to say the Metzger was well in with the mix.

This association with Nitsch and all that bloody mess could easily paint an  expectation of viscerally charged carnage.  But while Metzger is an artist who was pushing through the boundaries of art practice he did not need to rely on any shock tactics to make his mark. His transgression is of an altogether quieter form of revolution and subversion. And viewed today, it is refreshingly gentle in its approach to challenging the materiality and longevity of form.

The first piece I encountered was  The  seminal Liquid Crystal Environment (1965 remade 2005) . Wonderful mechanically driven rotating glass slides, are projected  onto the walls of a room floored with a plush carpet and strewn bean bags. The motors of the projectors whirr away, and via this classic visible technology, the patterns shift and change in an immersive and meditative hypnotic rhythm that suggest  biological slides and high tech imagery. Akin to a chill out room from a pre rave era. Indeed this work feels like a precursor for so much of the digital art projections we come across today, only arguably much better. It is achieved with elegance and finesse in a pre-digital age. It is real stuff in the real world, rather than an image of something.

Another joyful work is his ‘Dancing tubes’. When I entered the space, two translucent plastic air tubes some 20ft long, hung vertically from the ceiling, in an otherwise white void, they were moving very, very slightly with the ambient air. An air compressor on a timer then kicked in, and the tubes start to flail away for several minutes, powered into a madcap dance by air pressure. This gave me the biggest smile I’ve had from an artwork in a while. Again, low tech means deployed with delightful efficacy. The ordinary made extra-ordinary.

A third work the re made ‘Mica cube’ (1968 -2014) is a Perspex wall mounted box, containing fragments of Mica which gently move around, and catch the light, with fairly like sparkles. The work is almost invisible and only works from certain angles at certain times. Each time they collide, the work disintegrates, and this is a flagship work of Metzger’s auto destructive art. Charmingly, elegant, subtle self destruction.

This artist understands how to use less to its maximum effect. His is art that questions the permanence of artistic practice and celebrates the randomness of our worlds.  He is an artist,  to quote a friend, who knows how to ‘surf the chaos’. He gives over the final control of his work to the elements that make it up. This is perfectly demonstrated by the most recent photogram pieces which are made with a darkroom enlarger, exposing light through fibre optic strands blown around over the photo paper by a series of fans for a one minute duration. He carefully orchestrates the ingredients, but then they perform for themselves. His is an artful balance of choreography and freeform. This is for my money a must see exhibition. Go see it and fill your boots.