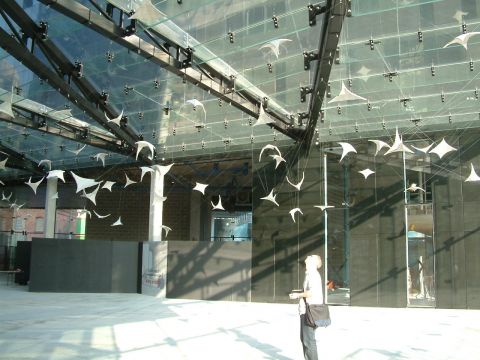 Courtesy of the artist

Between two new black glass monolithic buildings at Mann Island on Liverpool’s resurgent waterfront lies a new installation by Mexican artist Hector Zamora. You first catch sight of the artwork as you approach the clear glass frontage which inside contains 200 suspended structures. These individual concrete cast pieces give the impression of a flock, shoal or even an alien invasion floating above head height.

The raw grey concrete reveals its material truth and beautifully exposes its moulded construction; what you see is what you get. The 200 rhomboid-like concrete shapes are organised in seven variations. These categories are ordered regarding distortion of shape, size and mass. They are sporadically displayed and each of the individual four corners are threaded with wire and hung from a black steel framed gantry.

The actual site interacts and complements this work since the glass walled enclosure is a transparent area that exposes the quayside, docks and associated buildings. This World Heritage site is a place of movement and transience, a historical place of departure for millions of emigrants starting their journey to the New World. These concrete multiples induce feelings of migration and exodus. By provoking conflicting thoughts of threat and wonderment the piece holds your attention and imagination. The shadows cast against the floor, glass and walls enhance the play and movement of the work. Although a slight vibration is generated by the draught of the open doors the entire collective piece is composed and presented as a moveable entity.

The unidentified mass effectively occupies a space between the natural/organic and the mechanical/man-made. The evident concrete manufacture of each individual element of this artwork speaks of the industrial but viewed collectively the multiples appear as an extraordinarily beautiful and quite enchanting spectacle. The surface of these concrete slabs is rough and imperfect but retains an aesthetic appeal. The moulded seams are proudly exposed and reveal their process of manufacture which contrasts with the organic flow of the collective swarm. Although you are perfectly aware of the solidity and mass of each element of the installation the illusion conveyed is one of weightlessness. Each piece appears simultaneously animated and “frozen in flight” with their own individual and characteristic curvature in either of two opposing directions, the anticlastic or synclastic title of the work.

You can’t quite locate the position of Zamora’s artwork; it is abstract and yet at the same time reaches into the dynamics of the natural world. You observe the delicately cast concrete pieces above you just out of reach. He has magically transformed this solid material into something ethereal and insubstantial. Zamora has used this given space to its optimum and created a magical work that allows your imagination to fly.