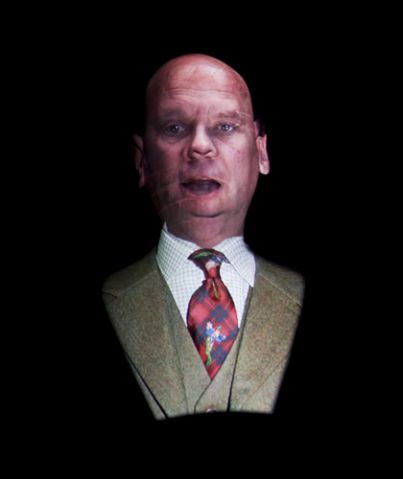 The title of the exhibition at Tattershall Castle evokes an opulent memoir to the castle’s rich heritage, but in fact looking around at the works, a surprisingly different conflation between a historical Grade 1 listed building, its role as a National Trust visitor attraction, and contemporary art installation, engages House Of Bling with different audiences, encompassing every aspect of the building’s use.

The exploration of the history of its tourism becomes apparent throughout the works, from KMA’s The Tour Guide, Catherine Bertola’s The Visitor’s Book, to Sarah Price’s Reframing The Picturesque, all alluding to the fact that Tattershall Castle remained abandoned for over 200 years, and its subsequent restoration and role as a visitor attraction. Several of the works reflect its restoration, and how they respond to a Grade 1 listed space alters the way the work is created.

Catherine Bertola especially is known for making site specific installations in which she recreates old wallpaper patterns within the remains, architecture and detritus of a space, but there would be no chipping away at the historical architecture here.

Instead, her Unseen By All But Me Alone series of golden cobwebs are possibly the most subtly bling creations of all the works.

Strangely, it was Linda Florence’s Reinstated Carpet that echos Bertola’s previous work; her carefully cut out lawn pattern transferring the memory of the interior outside, and how each of the works converse with each other becomes apparent as you progress upward through the spiral staircases, where Reinstated Carpet is viewed from the battlements.

As Eurofighters from nearby RAF Coningsby roar by overhead, the concept of carpets within a military stronghold exhibits a question of cosy prisons.

Geraldine Pilgrim’s Let Sleeping Dogs Lie juxtaposes two narratives, one a real historical account of the castle’s lost fireplaces, and the imaginary childhood stories of women trapped in towers, evoking the idea that through narrative, not experience, do we know or imagine the history of a place.

The very current theme of The Lady Of Shalott is apparent here, with golden thread providing a visual discourse with Bertola’s spider webs below.

The fairytale accounts have been shipped in packing boxes and installed in the towers – or are they too being taken away to somewhere else – much as the original fireplaces were once taken from the castle?

This responds to the sense of absence within the castle. Tattershall has very little original furniture remaining, one can only imagine the large banquet table with chairs all around, furnished by thought with medieval and Tudor banquet scenes.

The subtle way in which the art works respond to the place encourages memory and imagination, akin to the argument of reading a book as opposed to watching a film.

Upon Pilgrim’s work I found myself projecting my own thoughts on Baudrillard, Bachelard, Dostoyevsky, and the film The Lake House… And in that sense Pilgrim’s work in my imagination communicates with the projected The Tour Guide in the cellar below, and full circle to Reframing The Picturesque.

The fact that the works exhibited didn’t overwhelm the space, but in conversation with the castle – the castle and its architecture is the House Of Bling, There is nothing overtly shiny or expensive, and the location gives the work a uniquely site specific perspective – how other art installations would respond to the particular history of other National Trust properties is an exciting prospect for historians, artists, restorers and curators alike.