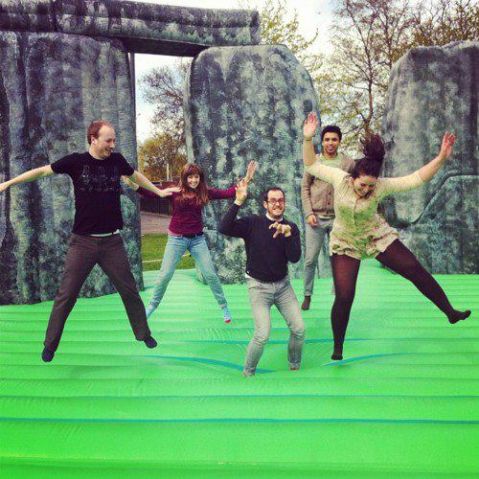 My name is Oliver Braid and I’m an artist based in Glasgow. Taking that into account, I’m writing this response to Glasgow International 2012 from a hotel room in Dublin. I’m over in Ireland celebrating the 2012 Glitch Festival at RuaRed. As part of that celebration I am contributing a special edition of The Ellie & Oliver Show, a year-long weekly radio show that I co-host and collaboratively develop with my flatmate Ellie Harrison. Most regularly we broadcast from our lounge in Glasgow’s West-end but occasionally we come out of hiding to celebrate an art festival.

During the run of Glasgow International 2012, we presented a triptych of peripatetic radio specials migrating to exhibition venues around the city every Friday; from The Mitchell Library (for the launch of their wonderful Art Lending Library), to Tramway and finally to the Centre for Contemporary Arts. We like to ‘pop-up’ when appropriate but we’re keen to keep the show as domestic, intimate and ‘immediate’ as possible. This decision arose from a shared interest in mindfulness; we hope to achieve this ‘holy-grail’ state through building and focusing on the quality of our day-to-day social interactions and pausing to enjoy our already existent friendships rather than always looking outwards and onwards. We share a joint interest in Hakim Bey’s Temporary Autonomous Zones; those happenings that arise, unmediated, through interactions between groups of people that disperse once identified as such by others. For our first Glasgow International special we focused on the concept of ‘Communities’.

Glasgow has a great reputation for being home to a large and varied artistic community. Many of the reviews for Glasgow International 2012 made explicit reference to this, its concentrated level of creative talent and the city’s ability to provide outlets for practitioners at varied career stages with the Guardian highlighting the festival’s ‘liberating spirit of openness and local involvement’.

The word Festival, according to one well-known but slightly embarrassing internet information source, derives from the Latin word Festivus which implies the ‘celebrating of a special community’. Therefore it seems essential that when truly appreciating an art ‘Festival’ we should not only experience the work on offer but keep in mind two other key aspects. Firstly, but perhaps less importantly to individual celebration, we should commend the large number of people who, preceding the festival period, dedicate themselves to the production of the events on offer. Secondly during this time we must remember to observe our own, smaller communities that we are associated with specifically through our shared interest in art – our ‘art friends’.

During our radio special on Communities I suggested the best way to enjoy Glasgow International, or any arts festival, is to look at it as a ‘Christmas for artists’. We could keep it special by using the festival’s durational quality and temporary produce as a ‘totem’ to gather, unite and socialise around. I’m not suggesting that every artist based in one city should feel total social harmony or cohesion with all others, but there are always those that we hold dear whom without the mutual ground of art we may not ever have known.

Perhaps the commemoration of this unison is simply remembering to meet with old friends from another city who are up for the weekend – taking them out to an opening or two. Or perhaps, more radically, rather than attending every public or private ‘opening’ that we can –we could reserve a night for holding a smaller dinner-party-style gathering to discuss anticipations or reactions to the festival in question. Could our lounge become a mini-opening for ‘one night only’ with the key focus in the room being the friendships we have crafted through previous or current creative engagements?

I wonder if it is possible to extend the ‘Christmas for artists’ metaphor further – to demonstrate a distinction between the above gathering and the more general exhibition opening. The exhibition opening could be more akin to the ‘work Christmas do’ – it brings people together at a time and in space not necessary in union. On the other hand, the aforementioned ‘dinner party’ would function more like a picturesque family get-together where each participant celebrates within a smaller, more familiar and intimate group. It is a social situation which offers the chance to rejoice in more creative – read idiosyncratic – ways with a greater freedom offered through the security of being amongst friends.

This second type of party may not even require pre-arrangement; it may arise through the excitement of an upcoming event (such as an art festival) but happen in a spontaneous manner on a site without access for the general public. On a lazy Wednesday lunchtime with some of my studio friends, a few days before the Glasgow International grand opening, we spent a very happy hour handcrafting GI party outfits from some big bags of fabric scraps. These communal actions can stimulate creativity somewhere between Emile Durkheim’s Collective Effervescence, a shared group ecstasy that can cement social bonds, and Hakim Bey’s Poetic Terrorism, an art that is ‘divorced from all conventional structures of art consumption’.

The way to qualify the success of an art festival that I am most interested in highlighting is its ability to instigate offshoots and outbursts of friendly revelry inspired by, but not always in conjunction with, it’s build up, reveal and temporal existence. The festival’s offerings should transcend their object-hood to become a stimulation point that spurs on each sentient individual to re-invigorate their day-to-day engagements with the micro-creative-communities that will be in their lives long after the bunting is taken down. A festival noted for this possibility is already half way there.

Oliver Braid is an artist based in Glasgow

Oliver Braid is a visual artist living and working in Glasgow. He studied at Falmouth College of Arts and Glasgow School of Art. He has recently exhibited Love Made Easy at The Mutual, Glasgow, Iâ€™m 26 & Iâ€™ve Got Nothing at BBC Scotland, Glasgow and Iâ€™ll Look Forward To It at Collective, Edinburgh as part of their New Work Scotland Programme 2011. In 2012 he will present My Five New Friends, his first large scale solo exhibition, at The Royal Standard, Liverpool, a new short performance work at Tramway, Glasgow for their New Work Symposium and will be involved in two small projects for Glasgow International 2012. www.oliverbraid.tumblr.com