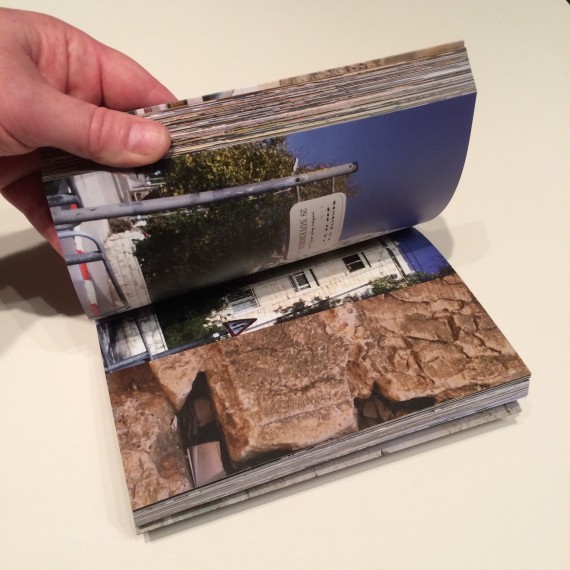 Just ten years after the start of the First World, in a shaken Germany in aftermath, Ernst Friedrich wrote War Against War!, a critique of the process of indoctrination which enabled and enables the war machine to operate. Friedrich positions the start of this indoctrination in childhood, suggesting it is here ‘children are educated for war by means of toy soldiers!’ The impact of his project is mediated in the book through a combination of image and text so that as the reader turns the pages, he or she experiences the escalation of what war means – literally holding in the hand the weight of an unrelenting chronological mapping of the physical and psychological impact of conflict. The reader is implicated in the simple act of turning the page.

Just under a century later, in Idit Nathan’s exhibition Footnotes Playing Dead at Standpoint Gallery, I find myself experiencing a related questioning of responsibility in relation to conflict. As Nathan’s lightbox installation Mining the Archive (2014) reveals through a chronicling of her own family’s relationship to twentieth and twenty-first century war, it is hard to gain an aftermath position, to find space for the kind of reckoning that Friedrich tried to make. The possibility for pacifism – of alternative political solutions to conflict – are hard to gain perspective on, when war is a constant companion. It is this lack of perspective that is deconstructed by Nathan.

So, for instance, a visitor to the exhibition can play the Handmade Memory Game (2010), where, in an act recalling the simplest child’s card game, the participant is encouraged to pair like images with like. As Friedrich suggests, here at first the game takes precedence – can you find a match for each image, can you locate their position in your memory? It is only when your gaze turns outwards that the chilling impact of the game becomes apparent. The images the player is so casually holding in his or her hands depict aerial bombing, deportations and checkpoints. Playing the game asks the player to consider how it feels simply even to handle these images and the historical reality they represent.

Unlike Friedrich’s project, however, here the caption and the image are held apart. In Nathan’s version we look at the moments of violence as simply that, moments without context. While describing our remote experience of war, the game also asks a question of this cathected experience. How is it possible in these conditions to understand the weight of evidence and the meaning these images represent? In a twenty-first century reworking of Friedrich’s resistance to war, Nathan draws attention to the responsibility of looking/witnessing and the possibility for action (in this case play) as creative, as fuelled by curiosity.

Behind the several games in this exhibition (colouring-in, a remade Monopoly board, and this memory game) also hangs the possibility for the visitor to stop following the rules, to resist, to do things differently.

What Nathan also offers is evidence of the conditions that make difficult the kind of perspective needed to fuel action. It is not only historical perspective that is critiqued here. Nathan also explores landscape and the way it communicates meaning, particularly through her moving-image work and in her artist’s book Please Watch UR You Head.

The book is the size and weight of a Baedeker guide and contains a secret map, which is wrapped round a photographic record of walks through Jerusalem by Nathan. What the book reveals – not only in the mixed scales deployed by Nathan from the reality she records, but also via the book’s design, where an image from the next page already interrupts its predecessor – is that the modern framing of landscape is about hurried fast-forward momentum, an act where perspective is grabbed at, logged, recorded as if for either an interrogation or a calm that never comes. It is, in this way, a state that counters the possibility for intervention, for activism, for resistance. Here too, however, it is curiosity on the part of the viewer, encouraged by the humour that disrupts the meaning of the city, that encourages a reconsideration of the status quo.