Angela Kingston on David Ward: In The Air - a-n The Artists Information Company 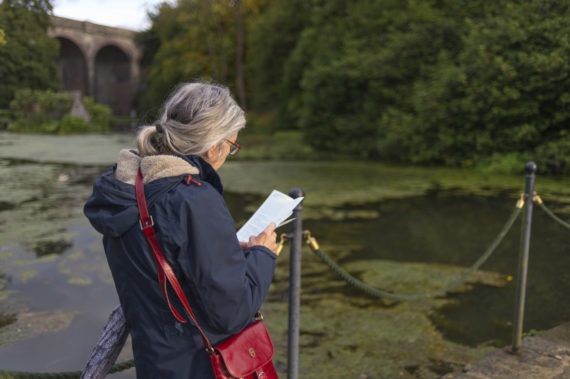 Following the path by the millstream at Kilver Court, past the flowerbeds with their late summer dahlias, I arrive at the lofty brick viaduct that traverses the gardens, and I take shelter under it from the Somerset drizzle. I have been listening out for David Ward’s acoustic installation, called ‘In the air’, but it’s only now that I can distinguish this artwork from all the other sounds. 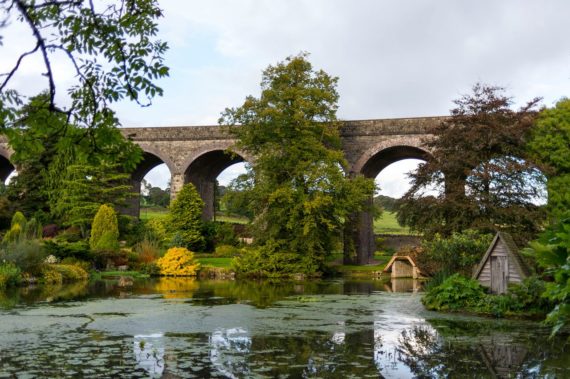 Under the first arch, playing on a pair of speakers, there’s a recording of a woman reciting the names of rivers, ranging from modest Hampshire chalk streams to globally significant waterways such as the Zambezi. I find myself in a train of thought that connects the millstream in this garden with tiny tributaries on higher ground, and other, bigger rivers downstream, and finally the sea. As if in answer to this thought, I become aware of the sound of the ocean that issues from under the next arch of the viaduct.

As I walk from arch to arch, each resonating with the different sounds of Ward’s installation, thoughts are occurring that, unknown to me, have their genesis in the artwork. Just as I begin to wonder what this garden might be like at night or at a different time of year, I hear the cries of owls or the rasping of crickets. I seem to inhabit another imagination and consciousness: presumably, those of the artist? 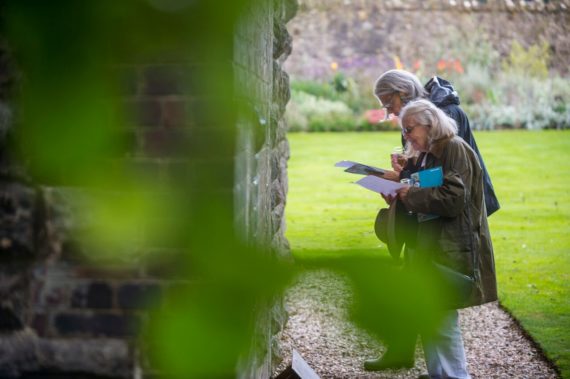 Under another arch, there’s a recording of a man who is describing looking closely at highly cultivated flowers as a child. In this case I inhabit a memory that is not mine but which could be. As I look around the flower garden with its old-fashioned varieties and design, I am transported back to my grandmother’s garden.

From time to time, the wind gets up and catches the early autumn leaves of a nearby stand of trees. The swooshing is a distraction that takes me on another tangent, this time a simple reflection on the effects of various forces on different materials in nature. But could this new train of thought also be  ‘authored’ by this place and the artwork? It is after all my sole reason for being here, and paying such close attention to everything. 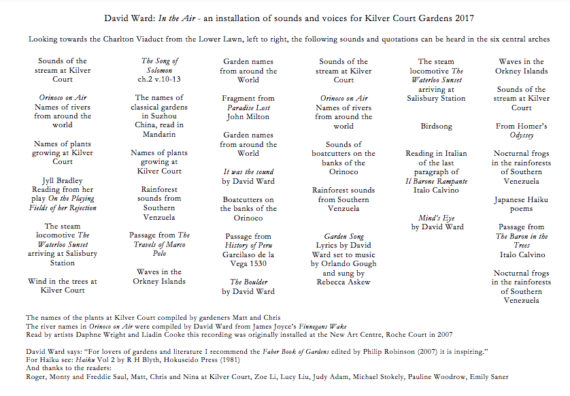 There are many other possible tangents in this palimpsest of a place, and David Ward’s artistry is to catch hold of where our minds might be inclined to go. He also proffers Haiku poems about frogs, the sounds of a steam locomotive, the names of Chinese classical gardens, and much else besides. And I later learn that a recording of the sound of wind in the Kilver Court trees is part of ‘In the air’: and so my ‘distraction’ turns out to be part of the experience, as conceived by the artist. Thus, ‘In the air’ could be thought of as a model of the mind and how it wanders.

What I will take away, too, is the experience of not directing or owning my thoughts, of another person’s memory merging with my own, of dissolving into the artwork and into this place. And this kind of escape is a precious gift.

‘In the Air’ (16 Sept to 8 Oct, 2017) was an immersive sound installation by David Ward, commissioned by Somerset Art Works for the Kilver Court Gardens in Shepton Mallet;  it included a new composition by composer Orlando Gough. The installation formed part of A Landscape of Objects, a major commissioning project for the 2017 Somerset Art Weeks Festival.

Somerset Art Works is an artist-led organisation and Somerset’s only countywide agency dedicated to developing the visual arts. We currently have over 400 members, including artists, makers, curators, organisations. The core of SAW's philosophy is to provide opportunities for artists and makers to make new work, network with other artists and engage with a variety of organisations, landscapes and communities.