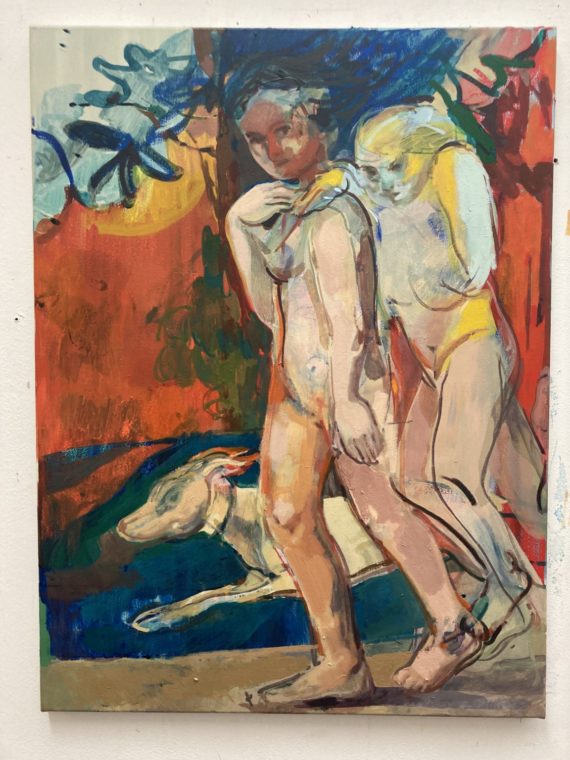 ‘You have made Art an outlet for the passions, a kind of chamber pot to catch the overflow of I don’t know what. It doesn’t smell good. It smells of hate!’
Gustave Flaubert to his scorned lover Louise Colet.

Most innovation, most creative thoughts come from outsider moments, times when we feel ostracised or let out in the cold. Yet the dreams of getting together, of sparkling social intercourse, persist. We club together and we shut people out. It is the vicious circle of life. When we are in our exile we dream of that Bohemian lifestyle hovering, shimmering as a mirage on the horizon.

There is a fragmentary element to the world of both artists in this show: Marcus Cope and Joana Galego. It is possible to argue that one of many starting points for both of them is the work of the American R.B. Kitaj, who came to Europe as a GI in the middle of the last century. Though older, he was a contemporary of David Hockney at the Royal College. He had a vision of a Bohemian café life, a constant flow of intellectual interchange. It was he who first coined the term School of London and was instrumental in helping promote the idea of London as a hub of living artists.

In her novel, I love Dick, Chris Kraus, does a ruthless but fair demolition job on Kitaj, accusing him of reducing women to ‘either sisters, mothers, aunts or whores.’ Whereas earlier feminists attacked Jackson Pollock for placing the male painter at the centre of the arena of paint, she shines a light on hott the chauvinist ego gets in the way of Kitaj. In his famous painting The Autumn of Central Paris (After Walter Benjamin), 1972, the high forehead of Benjamin is the focus. A woman looks on in admiration.

Kitaj talks about that painting in reference to Walter Benjamin: ‘the adventure of his addiction to fragment life, the allusive and incomplete nature of his work (Gestapo on his heels). It was a drama, but it was a male one. Joana Galego gives us visions of fragmentary existence, but it is as if she has flipped the viewpoint. Instead of all the pieces aspiring to come together in a fleeting ultimate revelation, she gives stolen moments that work on us like emotional depth charges.

In her essay About Kitaj, Kraus quotes Flaubert’s intolerant remarks about his lover’s intrusion into ‘his’ world to illustrate how men tried to compartmentalise intellect and emotion. As Kraus writes: ‘Because emotion’s so terrifying the world refuses to believe that it can be pursued as discipline, as form.’ 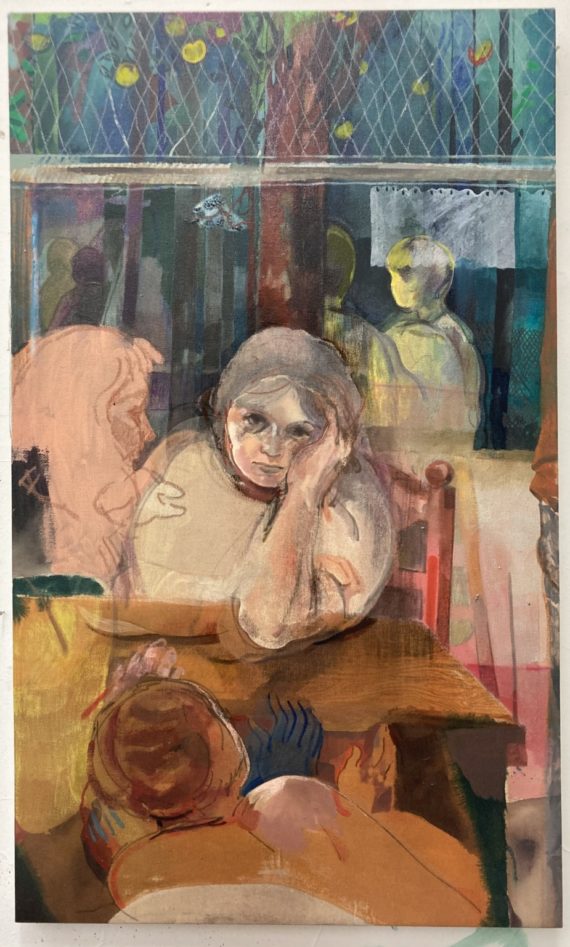 In this exhibition, we have placed two large works by Galego side by side almost as if they are a diptych: The Intruders and Cracked Shell. It is a way of highlighting the fact that no single thought, no single emotion, is sacred in its own right. There is a sense of being in the whirlpools of Galego’s paintings, but it is also as if these little scenes are emotional bombs ready to go off at any moment. ‘To be female means being trapped within the purely psychological,’ Kraus wrote satirically explaining a man’s point of view.

The fictional Chris Kraus began her letter to the man she was stalking with a fuller explanation: ‘Dear Dick, I want to make the world more interesting than my problems. Therefore I have to make problems social.’ Whereas Kitaj’s pictures are most definitely about Society with a big S, Galego’s and Cope’s are more insinuatingly social with a sneaky small ‘s’. They are restoring the balance between emotion and intellect, or rather they are attempting to mend the wound caused by centuries of unnaturally segregating one from the other.

Chris Kraus effectively writes an essay about Kitaj within her novel, I love Dick. It is in the form of a letter about Kitaj’s exhibition at the Metropolitan Museum in New York. The show had travelled from the Tate.

It is difficult to see Galego’s pictures at times as anything but a kaleidoscope of famous paintings. I see Masaccio’s fleeing Adam and Eve, Pisanello’s running dog, Manet’s Dejeuner, and Giorgione’s Tempest, but that is really just vocabulary. When one looks at the pictures in their own right one is overwhelmed by flailing and often apparently abandoned limbs. The paintings are demanding to be understood, or not as the case may be, much as a lover might. You can walk past them. You can dismiss them. But if you respond you are rewarded.

Looking at Kitaj’s vision of café society with its cardboard cut-out depiction of the Soviet revolution raging underneath as a frieze, one is tempted to conclude, as Kraus does, that ‘history as we understand it is really just an avalanche of garbage toppling down.’ In Kitaj’s paintings, the connection between the patchwork story was the storyteller, Kitaj himself. It is not that Kitaj was vain. He undoubtedly thought the ideas were bigger than himself. He was prepared to work through thoughts, again and again, as long as it took, to find new perceptions, new angles, but ultimately his paintings were jigsaws that if you had his key you could understand.

Marcus Cope’s paintings are less fragmentary than Galego’s and Kitaj’s. They appear at first more traditionally coherent, but the Baudelairean rogue element is not always as obvious as the horse pierced by a tree that interrupts the rhythm of the sea horizon at dusk in Stray.

The title tells some of the drama in The Night Hana Fell off the Wall, 2018, but only some of it. It is more about absence than action. One minute Hana was on the wall the next she was gone. It is like the mirror image of Kitaj’s fellow School of London friend, Michael Andrews’ painting: A Man who Suddenly Fell over, 1952. In Andrews’ picture a huge sprawling man fills the canvas, in Cope’s we see the legs as the sign of disappearance.

Eight Years Ago, 2019, is a painting of a poetic paradise of a garden. The golden steps lead up to a door. A man is silhouetted in the light of the doorway. It looks as if he could be the gardener, the creator of that little Eden, on his way out. It was actually an artist friend of Cope’s, Geoff Rigden, who died in 2016. I did not know Rigden, but I knew and loved Kitaj so almost imagine it as him.

Kraus writes of Kitaj that ‘his best paintings subvert the power of their image by tossing them around … it is through an act of will – collision, contradiction, that these paintings attain power.’ Kraus rightly pointed out that there was much to react against in Kitaj’s work, but it is good to see that like her a new generation of artists can move on and benefit from a great artist’s flaws and strengths. In the conclusion, I leave you with Cope’s Dead man’s Coat (Elephant), 2021. 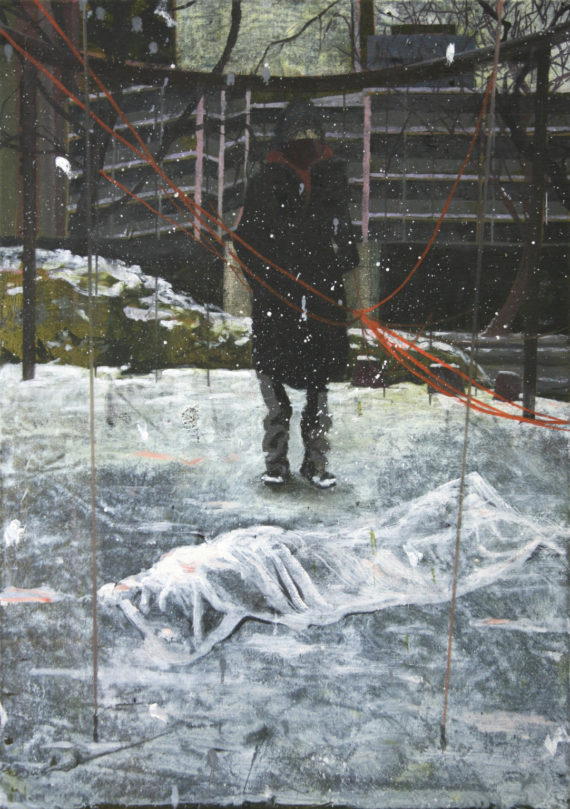 Alistair Hicks is a writer and art curator. He was Senior Curator at Deutsche Bank for 20 years and is an international curator.