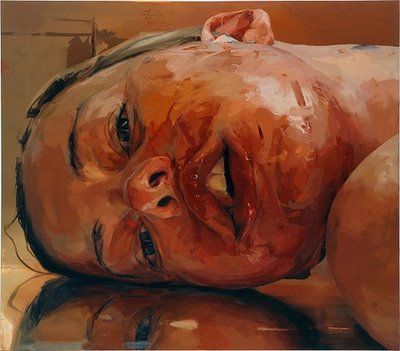 Oxford well and truly embraces its newest artist resident, Jenny Saville, by playing host at Modern Art to her first solo exhibition in a public gallery and at the same time exhibiting two of her new pieces in the Renaissance room at the Ashmolean Museum. Jenny Saville is blessed with an enormous amount of talent. The combination of her drawing skills, understanding of how paint behaves and incredible painting abilities really are quite awe inspiring. Her enormous canvases are testament to a self-assurance in both subject matter and execution that only someone possessed of such talent could afford to have.

The exhibition catalogue quotes Willem de Kooning who said flesh was the reason oil paint was invented and there is plenty of both on display here. Saville’s flesh is bruised, blooded, scarred and post-operative, but it is still beautiful. Her paintings deliver a double dose of aesthetic pleasure. Viewed up close they become an abstract landscape of virtuoso brushwork – broad sweeping strokes dance alongside gentle stippling and spattering, impasto oil both battles and compliment s against smooth gloss enamel. From a distance the combination of their sheer size with the violence of the subject matter demand a contemplation and reverence that much contemporary art is unable, or unwilling to aspire to.

The glazed-eyed, anaesthetised face of Reverse (2002) stares out blankly, a woman lay prone on an operating table after the surgeon’s knife and acid peel have worked their ‘magic’. At the same time this could easily be a painting of a discarded corpse laid out on the stainless steel morgue table, a victim of criminal violence and waiting for another type of surgeon’s knife, for a post-mortem. The paint almost oozes off the canvas.

Early paintings such as Trace (1993) and Fulcrum (1997-99), completed while Saville was in her early twenties show the blossoming of her early talent. Now aged forty two, her paintings continue to show a sureness of hand. Torso II (2004-05) is yet another tour de force. In fact all the paintings on display in this exhibition pack a very powerful punch. That said, I have to admit at being disappointed with her most recent mother and child studies and Leonardo reproductions, which seem lazy and predictable in their depiction. Without question these drawings are as skilfully executed as her paintings and the blend and intricacy of the mark making within them is also a feast for the eyes. But while I completely understand that the impact of motherhood fundamentally changes the focus of the majority of women who give birth and that nurturing their children becomes an all-encompassing experience, for a contemporary artist whose previous works have unflinchingly confronted subjects as described by the exhibition catalogue as testing the thresholds of received ideas of decency, taste and social norm, to revert to a classical, almost idealised depiction of motherhood seems more than a little regressive and unconvincing.

Despite this, this exhibition is an absolute must see and I whole-heartedly recommend a visit. It is rare that a one-person show at Modern Art Oxford can hold its own in the lofty galleries in the former brewery. Jenny Saville’s work seems almost site specific and fit into the galleries like a glove, albeit a bloodied surgical one.

Stephanie DuboisÂ graduated in 2006 from Bucks New University with a BA (Hons) Fine Art Practice, followed by a yearâ€™s post graduate study at University of Hertfordshire.Â  Currently living in Milton Keynes, Stephanie has just an MA History of Art programme at University of Reading. Her research explored the relationship between gender, ideology and culture with regard to how women artists have been inscribed into art history. Particular interests included self-portraiture and depictions of the female nude by women artists in the nineteenth and twentieth century and womenâ€™s sculptural practice in the twentieth and twenty first century. http://laughingtorso.blogspot.co.uk/