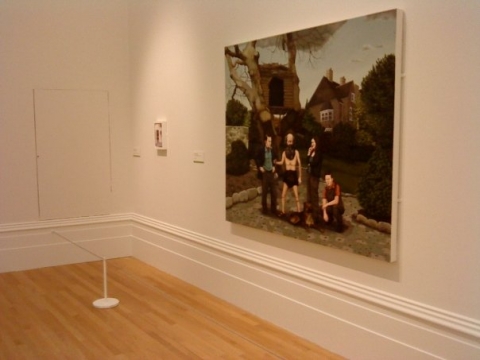 Now in its 50th year, the 25th John Moores Contemporary Painting Prize presents a selection of new British painting. The prize has historically been the turning point of several highly prominent artists careers, including Peter Doig, David Hockney and Richard Hamilton and as such the high number of applicants (3,222) this year is unsurprising. Shortlisted works are shown at Liverpool’s Walker Art Gallery and form a major strand of the city’s Biennial.

One of the dangers of prizes such as this is that it can be too exclusive. In the same way the Jerwood Drawing Prize is undermined by its ‘drawing for drawings sake’ attitude, the John Moore’s has faced criticism for promoting medium over content. As the eventual winner Peter McDonald has stated it is an opportunity to ‘think about painting as a practice, carried on over many years through trials and experiments’. If the techniques of artistic modernity have reshaped the way art relates to the everyday, they have also lent themselves to a whole apparatus of intellectual elitism and obscurantism. In such a sense does the John Moores simply limit its appeal to the traditionalist art viewer?

There has been a clear attempt to redress this potentially flawed vision with the selection of juror’s. The Chapman Brother’s were presumably chosen to exorcise the stigmatism of traditionalism attached to the exhibition. Yet at times their presence is too overtly felt. There is an overbearing nihilism throughout the show that can at times become tiresome. Tim Bailey’s Cadet Congo Ganja reminded me of the Chapman’s recent show at the White Cube and Michelle McKeown’s Cunt felt quite condescending. Unfortunately, the Chapman’s presence on the jury results in a sense of predictability. Stuart Pearson Wright’s Woman Surprised By A Werewolf evokes a powerful insular response but it is just the kind of work you expect from anything associated with the Chapman’s.

Another danger with exhibitions of this type is that work becomes cluttered and unrelated and as a result impenetrable as a whole. However I felt there were definite themes that inter-linked across the 40 paintings on show that helped to underpin my responses. Many of the works dealt with notions of presence and absence, memory and loss and a fluctuating economical climate – all of which are undoubtedly still vital issues.

Runner up winner Geraint Evan’s painting An Ornamental Hermit presents what appears to be a family portrait in an English suburban garden. Evan’s crisp and detailed technique does not draw your eye to any specific area but rather the overall composition and its composite elements. What at first reads as an ordinary family portrait is disrupted by the presence of a hermit. This surreal snapshot references an 18th century fad whereby English landowners would advertise for a resident to live within their grounds as a hermit. I found the work interesting in its strange depiction of human behaviour in a conflicting environment.

Fellow prizewinner Julian Brain offer’s a similarly displacing approach in Special Relativity. At first glance Brain’s painting appears to depict a simple family living room. Yet on further inspection we see a surrealistic re-ordering of a domestic scene that represents the experience of adoption. Each object in the room represents a family member in relation to one another. The painting on the wall above the fireplace shows everything back in its correct place as a reminder of the differences between biological and sociological identities.

I will admit that I had a pre-conceived idea that I would hate this show. I simply do not see the point of an exhibition solely centred on painting other than for a bunch of painters to stand around slapping each other on the back. However I was pleasantly surprised. I found both Brain’s and Evan’s work incredibly rewarding examples of originality in contemporary painting. Vibrantly engaging and thought-provoking they importantly have a context not restricted to the medium itself.

However, the success of isolated pieces does not necessarily result in the overall show working. Is their intrigue a product of the John Moore’s prize or is it in spite of it?