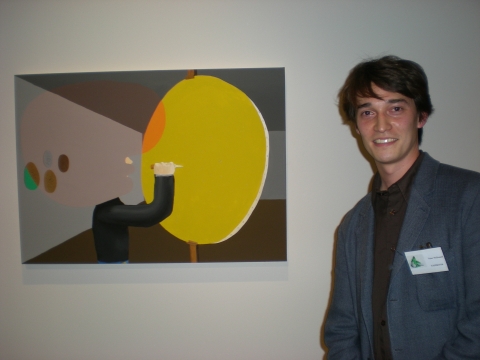 Fear not. The headline does not mean that some toddler's scribble at a McDonald's food joint has ironically won the nation's premier painting prize.

This was a night of people. Characters. Mayoral types with large, gold chains. A man with an extravagantly brimmed hat. Phil Redmond CBE, Mr Liverpool 08, Capital of Culture. Media cronies. Young artists. Nicholas Serota, up north, in the flesh. A woman on the prowl. A man who thinks he's a great lover. A loser. A winner. Coming into focus, under the spotlight of a minor media scrum, was Peter McDonald.

Yet there was someone else.

Beyond all the people, and their collective sightline leading to Peter McDonald, was the real star of this show. McDonald's painting – Fontana [the title nods to Italian artist Lucio Fontana].

The painting gracefully emanated its artful and abject qualities beyond the clamour of the crowd. In the painting is the aforementioned 'someone else' – shards of a figure, hinted at rather than fully shown. A self-portrait? A particular subject?

For sure, it's a painting of a painter. In that straightforward analysis (and that alone, strictly) Fontana seems unashamedly the preserve of painters, artists – in that way, and that alone, kindred to Picasso's The Painter and his Model or any such painting that may be described as paintings by painters for painters.

All of the 40 shortlisted paintings, on show here until January 2009, were selected as paintings alone. Critic Sacha Craddock, one of this year's judging panel and the announcer of this year's award, referred to this in her leading speech tonight: "Without the comfort of context, the paintings had to work – as they always do, perhaps – on their own without any understanding of where they come from or what they might be trying to say."

Craddock announced the four runners up, each collecting £2,500, to be Julian Brain, Geraint Evans, Grant Foster and Neal Jones.

Brain deserves a note here as the only self-taught artist in the shortlist show.

Another, odder, quirk is that the winner Peter McDonald rounded up what is in fact an all-male fistful of winners.

To the victor the spoils and, of course, the sudden accumulation of what is to so many artists the much sought-for promises. A certain fame. A rising stock value in respect of your work. Solid steps towards security, especially in the face of the credit crunch. And increased demands on your time…

As I waited for a few hacks to be done snapping at McDonald's heels, I noticed a gaunt, silver haired man wearing a pensive face that felt familiar, standing with his arms folded to my right. It was Serota. He stepped forward and had a quiet word with McDonald. I kept a respectful distance – enough to imagine Serota as a mafia don who'd just 'made' McDonald. After all, the John Moores is McDonald's first prize, and literally minutes after the announcement the handshake with Serota seemed to signal McDonald was moving up in the world.

Serota's a good warm-up man. The afterglow of having been congratulated by Serota was writ large on McDonald's face when I stepped forward. Yet McDonald has his feet on the ground and was impressively humble in victory.

I asked if his stock value had shot up on the night. McDonald laughed warmly: "No, not to my knowledge. You can ask my gallerist, Kate MacGarry." So I switched to what he does know and care about, the painting behind him: Fontana. "It came from my daily practice," he said. "Painting, drawing in my studio every day. It always comes out of doing. It just evolved from previous paintings I'd done… I thought because it's a painting show it would be really interesting to show a painting of a painter. I thought this would appeal to painters who were on the judging panel. And I just thought it would be interesting. And work." To my mind, it does.

Fontana is what the critic Sasha Craddock alluded to in the evening's key speech: "Painting is not alive, or dead. It is." Bottom line.

Another key player amidst the throng was Reyhan King, Director of Art Galleries, National Museums Liverpool which will buy Fontana for the Walker Art Gallery collection.

"I'm very happy with it," King said. "It's a highly appropriate painting for an art gallery with all the art historical references in it. I suppose Fontana, but more generally Colourfield. And it's beautifully painted. I love the very flat surface. And it's just lovely to see a young artist winning at the right moment in his career."

It is. But what of the other perk, the pay-off? McDonald wins £25,000 for first prize and sells Fontana to the Walker. Had the negotiations already begun? King was candid enough: "We have a very fair system. All the artists have to give us what their prices are, for every entry… so we would pay them exactly what they had said they were worth."

Money aside, credit crunch and all, the show itself is worth seeing. The night belonged to McDonald, supported by the four runners up, but there are 40 paintings here providing a chiselled yet remarkably full view of contemporary painting.