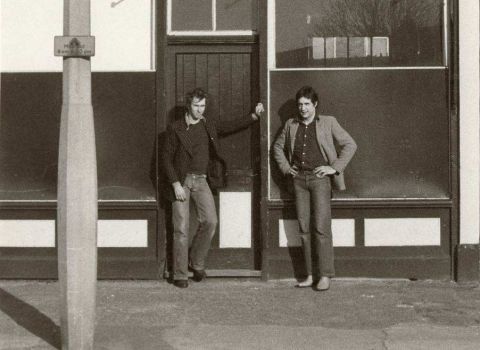 Acme co-founder Jonathan Harvey’s presence as a speaker alongside evocative black and white photographs in glass cabinets containing images of Harvey’s younger self, demonstrates that the archive presented at the Whitechapel Gallery is itself evolving and of continuing relevance. Yet it is also necessary to draw a line under certain elements, those from earlier phases of Acme’s genesis, which have now become complete and finished. Therefore, a measured mix of reminiscence and legacy set the tone for Harvey’s talk on the 5th December, 2013.

The Acme Echo, a newsletter by which Acme artists communicated amongst themselves, and shared advice, opportunities etc, was described by Harvey as being specific to a certain time. Perhaps at that time a less-developed and smaller vision existed than that held by Acme now; the collective identity of those early artists seems to have been more palpable and communally nurtured.

In the period between 1972-82, Acme accrued vast amounts of artists’ housing, some of which eventually dropped off the GLC’s demolition list, enabling artists to purchase and live in them on a much longer term basis – it is tempting to describe such a basis as permanent, even. However, these artists remained poor, and struggled to maintain these properties, where in many cases all the internal walls had been removed to make open plan studio spaces. Domestic concerns of insulation, furnishings and utilities had been far down the list of originally short-term priorities. The rising value of these Hackney terraces which had escaped the post-war decades of slum-clearance demolitions eventually forced them out of these artists’ possession, albeit having reaped them a benefit in resale profit, enabling those artists to take a more permanent posting on the property ladder elsewhere.

The end result remains that Acme’s original premise of providing short-term studio-housing was not only specific to a particular period of time, but was ultimately unsustainable. After a certain number of years, such ‘short-life’ properties need to be conclusively deemed either uninhabitable (and consequently to be demolished), or an asset of potentially rising value, which takes it beyond the means of temporarily resident low-income artists. Acme have recognised this unsustainability by developing a new phase where they will fully own their own purpose-built ‘work/live’ units, managed for the sole benefit of artists. An inversion of the ‘live/work’ label now used by estate agents to up-cycle cramped ‘studio-flats’ with a desk space for designers with a suite of macs, Acme recognise that artists are in need of space primarily intended for the making and developing of artworks, or for art practices that don’t necessarily even result in artworks, by providing the space artists need to work.

Alongside Acme’s original model as a charitable housing association, a key legacy lies also with the Acme Gallery, situated in pre-development Covent Garden between 1976-81. Here, a broad spectrum of art practices were exhibited, representative of almost all forms of artwork emerging in the 1970s, and equally groundbreaking in their range. Selection for these shows was decided with reference to their timing within each artist’s career, rather than through a more traditional appraisal of their portfolio. There, happenings and performances took place which had never been tried before: a spirit of ambition for art itself was propagated within those soon-to-be-demolished walls, now displayed upon the Whitechapel Gallery’s walls in the form of posters and written/photographic documentation.

The overriding priority within Acme’s history which emerged from Harvey’s talk, was that of enabling opportunity to be used to the maximum by each artist who was given it: whether to create space to work, shelter to live in, or time within which to exhibit or perform their practice in a gallery setting. 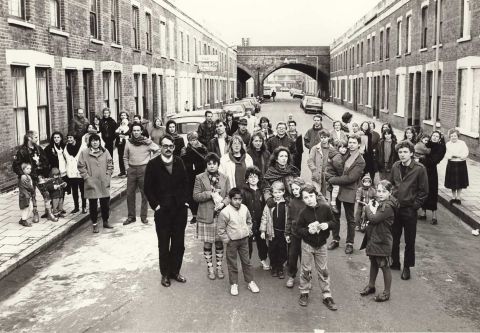