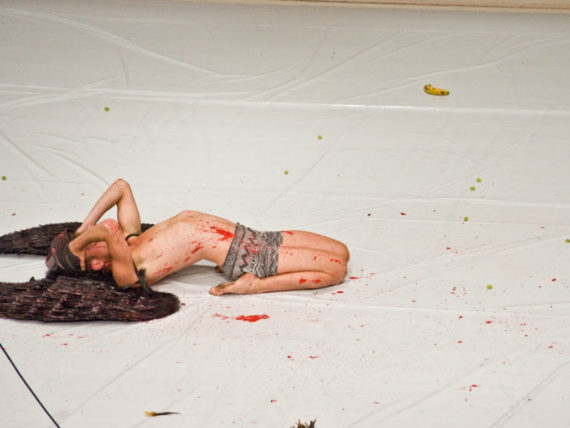 Well, a few nights ago I saw some things. At the MAC, Birmingham and stood in line at the Fierce event “Kein Applaus für Scheisse” (No applause for s**t). It was billed as a shocking, dance show critiquing pop culture and not for the feint hearted, so I had a feeling this was going to be good.

We were introduced to the performers Victor Riebeek and Florentina Holzinger with some harmonica playing, and a little moody piano to begin. Both performers wore robes, feathers, headdresses and glowing bangles. This lead, slowly, into a track by Rihanna with booming beats and police sirens, over which was sung lyrics about shooting a man which was delivered, deliberately a touch out of tune, and with aggressive, fake and sometimes wailing emotion. I guess it was a demonstration of the insincerity sometimes found in pop music.

This was followed by a kind of stripshow/cabaret scene, in which clothing was quickly shed, and Holzinger started swollowing a pink string as she sat legs spread on a chair. Riebeek then proceeded to pull ‘the other end of it’ from her vagina, like a magicians trick, before sitting back on the floor to chew on it. This got a few rounds of applause, some nervous laughs and various murmurs, but this was a Fierce Festival crowd so the mood was fairly buoyant. This went on for some time with not a lot else happening. I guess in retrospect this may have been a ploy to soften the initial shock of what you’d seen, and an opportunity to acclimatise, even encouraging you to want to the show to continue after seeing enough – but here really was the genius of the show – the juxtaposition of ‘vulgar’ acts and ‘vulgar’ entertainment all presented simultaneously as both shocking and banal. It felt like a kind of expression of entertainment and vulgarity within the arts, combined with a sense of the ordinary, and with curious moments of sadness or rejoice.

After this was a sort of mating dance where Holzinger swooned to the floor as Riebeek rang a little bell, eventually leading to him, shedding clothes and crouching over her on the floor as she, now naked from the waist down, thrust her pelvis into the air and breathed heavily. All of a sudden Riebeek reached down his throat and induced a scene of climatic puking. It was a bright, plasticy, baby blue puke and this was not acting, this was action, right there on stage, and fairly shocking, but again some of it’s power quickly defused as the puking ceased and Holzinger said “you don’t like me any more do you?” which kicked off a kind of morose, post-coital dialogue which eventually developed into a fairly cursory conversation about Riebeek being raped by a group of men in a toilet, during which, it has to be said, a couple of people got up and left.

After this there were a few melodramatic pop songs, the most memorable for me was a rendition of Whitney Houston‘s “The Greatest Love of All” performed as Holzinger sat almost weeping on a chair frustrated as Riebeek circled, cutting chunks out of the blonde wig she was now wearing. The lyrics “I believe the children are our future” and “learning to love yourself is the greatest love of all” rang in your ears with the onstage actions simultaneously colluding and denying the words “you can’t take away my dignity”.

Eventually Riebeek joined in with the song smiling, and in fact throughout the performance he had changed from an initial gloom and was starting to transform and become almost gleeful, as Holzinger retained a fairly constant cold stare. At this point a fair bit of clothing had been lost (sometime awkwardly coming loose and simply pulled off and thrown away) and Riebeek finally went the whole way and started to dance around naked, finishing with a scene in which he stood open-legged and began to piss over the stage. Through this little waterfall and between his legs slowly crawled Holzinger and there was a burst of applause as she slid back on to the centre stage through his piss on her belly – another clever gimmick for awkward laughter and clapping. After this she stood next to him and cocked her leg in a ‘wow, is she actually going to do that too?’ moment which was cleverly implied but denied, as she spat some of his piss back into his mouth.

These vulgar acts were mostly delivered in a kind of playful routine, but seemed also to carry a sense of the blasé. These taboo actions were almost being laughed off nonchalantly, as if to say ‘Hey, I’m not the first person ever to do this’. A few times Holzinger’s top slipped down revealing her breasts and there was a lot of ‘yanking pants back into place’ as the dancing continued – it was all fairly relaxed and comic.

I should point out I know nothing about dance so can’t really comment on much there, but some of the promotional materials mention that this has narratives with 70s performance art and, after a scene with rope tricks and a paintball gun shooting, the duo broke into a song about the dos and don’ts of being an artist based on words written by Marina Abramovic. In particular it reminded me of Carolee Schneemann‘s “Interior Scroll” in which she pulled a written scroll from her vagina and then read from it as a performance, and Martin Creed‘s “Sick Film” a montage of people making themselves vomit colourful liquids (which I blogged about before).

Although totally fascinating, I did feel that it could have evolved a bit more away from mockery, and the show seemed a bit loose and fairly flippant about it’s significance. Oddly it was kind of revived and taken into a new direction by a monologue in which Riebeek announced they never try to offend, gave a bottle of alchohol out to the audience, and curiously told us about some of their personal history, and a bit about how the piece had developed from their teenage years. It turns out the show has been performed and evolved ever since they first met at dance school in Amsterdam, and at this point you really started to warm to who they were and what they were doing. Riebeek announced he wanted to continue “until we’re in our 80s”, but admitted “it’s hard on the stomach”. The show ended with a bow to the audience in the form of an assisted toe-touch to the back of the head from both, and with the gift of a booklet for everyone specifically made for this event – “The Birmingham Edition”.

Aside from the obviously fairly extreme nature of the physical activities on stage, it made me think a lot about mockery and how you can be drawn towards something that you are critical of. I also wondered about the absurdity of the arts and what is considered entertaining, and about how disgust is such a powerful guiding emotion. It made me think about some of what David Eagleman has discussed on how, by analysing people’s disgust, scientists were able to predict their behaviour, and how perhaps we should try more to understand disgust as a flipside to attractiveness and how these values might shape our culture.

You can read more on this in another review from 2013 and here’s a similar performance caught on video.

As a Creative Technologist I have a wide range of creative and technical skills and specialise in bringing them together to build unique and engaging products. As a Digital Producer I plan, manage and deliver complex and diverse projects, and provide knowledge and expertise.

I am the Digital Producer at BOM (Birmingham Open Media) - a center for Art, Science and Technology - where I support staff, artists, exhibitions and events. I'm also a BOM Fellow and Creative Technologist in Residence with the Institute of Creative Technologies at De Montford University.