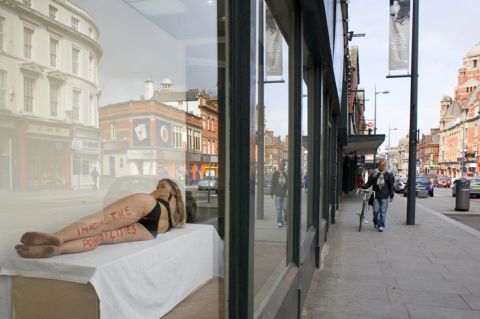 It is hard not to feel touched by an entire city throwing itself wholeheartedly into an international festival of contemporary art; filling galleries, churches, disused hardware stores, even the space between buildings with accessible, inspiring and emotionally resonant work. The Biennial allows the city’s residents and visitors from the UK and beyond to delve deep not only into the vision of over 60 artists, but the vision of an ambitious city, its curators, councilors and volunteers.

So really, this year’s theme of ‘Touched’ should be simple to achieve; Liverpool has been physically touched by the artwork and the new visitors the festival attracts. These visitors are likely to be touched emotionally by the works, affected by the subject matter; isn’t this what art does?

But it’s hard to believe it’s as simple as this. Can contemporary art really emotionally affect us and change our lives when it is only viewed momentarily? No matter how emotionally charged the work may be, the viewer is removed from what the artist sets out to do and thus witnesses only the end result.

Earlier this year as part of The Lowry’s 10th birthday celebrations, I commissioned Spencer Tunick to create eight separate installations, photographing unclothed, everyday people on the streets of Salford and Manchester. The participants became the artwork; they took the ultimate leap of faith and trusted the artist implicitly. There wasn’t one person involved in the project who wasn’t emotionally affected, or touched, by the experience. This is art in its most human form.

Admittedly art can be touching to a degree without this level of commitment, I would challenge anyone not to be moved by Kaarina Kaikkonen’s installation of clothes strung from the ceiling of FACT, clothes the people of Liverpool have donated, as well as those of her mother and deceased father. The garments have physically touched those who wore them, the memories of the person dressed in each item imprinted upon family and friends’ memories. The human psyche can’t fail to be affected; when viewing these very private garments in a public space, we can’t help but draw from personal experience.

However as I witnessed with the Spencer Tunick project, contemporary art can engage the life of its viewer more physically than this. Allan Kaprow’s Happenings of the late 50s and throughout the 60s aimed to break down the distance that existed between artist and viewer, with the notion of breaking down the ‘fourth wall’. The audience member becomes actively engaged, part of the work of art from the beginning and not merely a spectator. Unless this barrier is broken down, any lasting emotional affect is relatively insignificant when one draws comparison to the leap of faith taken in becoming actively committed to a work of art.

Where the ‘fourth wall’ is broken down within the 2010 Liverpool Biennial, the results are truly touching. Tania Bruguera and selected artists from Catedra Arte de Conducta actively engage their audience members whilst paying homage to some of Kaprow’s most renowned Happenings. Roundtrip, originally carried out in 1968, is reenacted in Liverpool’s ex Rapid Hardware store, and moves onto the streets of the city where the participants cumulate materials to create an ever growing ball of paper which travels with them. Bruguera’s vision fuses Kaprow’s original work with a Cuban beat, the audience members using saucepans as their percussion, shouting the Latin American idiom ‘Arriba de la Bola’ and relinquishing any embarrassment they may initially have felt. Each audience member is engaged in an act that challenges their own potential, allows them to experience their city differently and ultimately leaves a legacy of the work imprinted on their memory as something they belonged to and participated in.

Similarly, Daniel Knorr’s Naked Corner (2010) which sees members of the public undress and emblazon slogans used by global corporations onto their bare skin, is, in equal measures, a political statement about trade as well as a leap of faith by the participator. The work challenges the way the human body is perceived, addresses the private verses the public sphere and uses the body as a performative device within a very everyday situation.

Knorr manages to place the participant at the very centre of his work ‘transforming a mundane act into an act of empowerment, self-analysis and recognition’[1] This is surely central to the Biennial’s theme and Knorr is one of the only artists to attempt to emotionally affect the viewer by presenting them at the centre of the work.

‘Touched’ was always likely to be perceived as a slightly ambiguous theme; the extent to which one is emotionally affected by a work is highly subjective. I was certainly moved by Kaikkonen’s work, and affected by the ambition of the public realm projects which utilized every corner of the city. But The Biennial cites ‘the erotic frisson between art and its audience’[2] as central to this year’s mission, and where this is witnessed; in the work of Bruguera and Knorr specifically, it seems the work relies just as heavily on the viewer as it does the artist. It is therefore down to the people of Liverpool, the cultural tourists and the incidental passers by to facilitate the full artistic potential of the truly touching works. 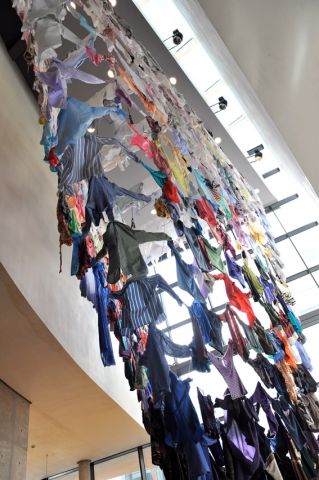