With a six-decade career, Alex Katz has never quite become a household name. His paintings, huge portraits of people associated with fashion, film, poetry and music or big inoffensive landscapes, shout at an attempt to be popular, but Katz has remained an artist really only known by artists and collectors, not the wider public. Despite London gallery representation and a 2013 show that toured from Tate St Ives to Turner Contemporary, he has never become popular in the UK.

Alex Katz was born in 1927 to a Jewish emigre family in Brooklyn, New York. Since his first solo show in New York in 1954, he has had more than 200 solo exhibitions and been included in nearly 500 group exhibitions. Across that time, he has been associated with Pop Art, and seen as an influence on the painters among the Young British Artists. 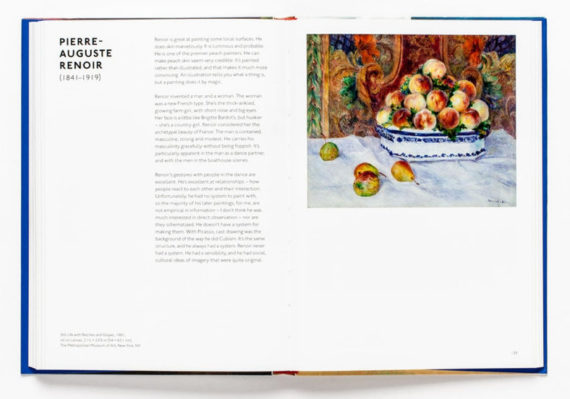 In Looking At Art With Alex Katz, he looks back at the artists who have influenced him, been his contemporaries, and in some cases, disappointed him. He moves quickly through Michaelangelo, Renoir, Rembrandt and Da Vinci to Rosenquist, Chuck Close, Lichtenstein and other contemporaries. He never lingers long: each artist gets a few hundred words at most. Jasper Johns gets one page and fifty words: Jackson Pollock fifty-five words; Van Gogh, Van Eyck, Seurat, Frans Hal and Giacometti are all dealt with in about a hundred words. Rembrandt, spread across four pages, gets what for Katz is a near-essay: it’s only about eight hundred words long.

But despite the brevity of writing, there’s no austerity of opinion. Katz quickly gets to the point, and in doing so delivers real insight that art critics writing more lengthy essays or even entire books can only hope for.

Of the Mona Lisa, Katz says,  ‘it’s the smile they talk about, but you realise that the smile is frozen. It’s the eyes that are alive.’ Talking about Vermeer, Katz says his paintings are ‘tight, the edges are open, and they’re never monotonous. The overall light is perfect, and all the local surfaces are distinct.’ Tintoretto’s portraits have ‘nothing there, but they have the substance and presence of a unique person.’ Renoir ‘does skin marvellously. It is luminous and probable.’ 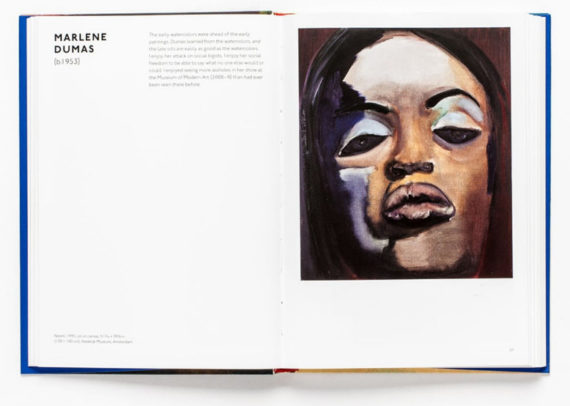 Katz brings paint to life in his words. Never has writing about the great artists been so concise, so precise, and so insightful.

Katz can deliver such deep insight so quickly because he has spent a lifetime with painting. He has looked again and again at the artists he admires, unpicking paintings brushstroke-by-brushstroke until he really understands them – and he has spent the same amount of time applying paint to canvas, too.

91 years old, Katz has put a lifetime of practical learning onto the page. Although most artists make awful writers, only an artist could have written a book this edgy and enlightening.

Looking At Art With Alex Katz is published by Laurence King