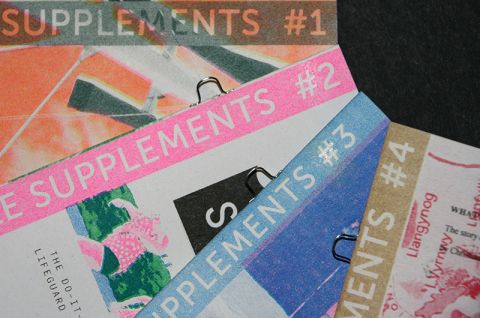 A mysterious monster in a Welsh lake, a selection of decommissioned Cold War bunkers, a DIY lifeguard chair, fake safety cones on a Bristol industrial estate: these are the strange and wonderful subjects of Loophole Supplements. Curated and produced by Nick Davies, they’re a series of pocket-sized artist editions, bound with distinctive looped staples – and intended, he says, as a “low means, high impact way of exhibiting”.

Joining a long tradition of political pamphlets, community bulletins and fanzines, Loophole Supplements are printed in small numbers using the risograph process. They are distributed free across Southwest England, Wales and beyond, in galleries. bookshops, job centres, libraries and tourist offices.

A loophole is a means of evading a rule without actually breaking it, an alternative route through. A supplement is a type of publication, but it’s also an extra, a bonus, or something that addresses a deficiency. True to their name, Loophole Supplements give exposure to emerging or under-represented artists, offering them scope to extend practice or projects to the printed page. And, by distributing work widely in an accessible format, they have the potential to sneak new art into places it wouldn’t ordinarily reach.

Risography is an increasingly popular full-colour reproduction process reminiscent of screen-printing. Low cost and environmentally friendly, it uses banana-fibre stencils and plant-based inks. In practice, the machine looks and behaves very much like a photocopier, but the quality of the products is unique.

Grainy, semi-transparent colours and a pleasing silkiness to the print surface give these publications a decidedly retro feel. And, although Loophole Supplements have been produced by artists with diverse practices and interests (and therefore varying approaches to their commissions), the publications feel like a coherent set.

For me, the most successful of the four editions produced so far is #1 To Mask The Absence by Ryan Curtis, published in September 2012. This carefully crafted visual puzzle combines found images of disused nuclear and military communications bunkers, along with the artist’s own deconstruction of a naval signalling station in Plymouth. A quote from Borges about ‘the fictitious past’ and an extract from an interview with Ayn Rand complete the uneasy sense of abandoned systems and ideologies which, though once deemed redundant, may still come back to haunt us.

Although complete in itself, To Mask The Absence references Ryan Curtis’s wider body of work, which is often concerned with instability (of physical objects as well as meanings) and frequently has apocalyptic overtones.

Loophole Supplement #2 Swim Pal was made by Rural Recreation, a Devon-based campaigning body for new social visions of the rural. Growing out of Submergency (2012), a pop-up lido on Dartmoor, Swim Pal is an instruction manual for building a portable lifeguard’s chair and also includes free sound and music downloads. Contrasting the current obsession with health and safety with the spirit of adventure needed to undertake wild swimming, it’s a pointed and witty piece.

In #3 Safety Cones, Sam Aldridge pushes the risograph process to places it was never meant to go, with stunning results. Almost entirely visual, this edition documents the placing of his cardboard sculptures of traffic cones around a Bristol industrial estate.

Mimicking commercial printing processes, full-colour photographs were separated into blue, pink and yellow colour layers, overlaid by three passes through the machine. The result is a rich, slightly psychedelic visual experience, full of unsettling mis-registration that seems to call for special optical equipment in order to be fully comprehended. By the final page the safety cone is no longer a mundane object. It has become a thing of ominous significance – animate, knowing, but ultimately squashed by the motorised vehicles it exists to control.

Loophole Supplement #4 by Thomas Goddard is an intriguing collection of extracts from Teggie: The Beast of Bala, an archive exploring the myth of the Bala Lake Monster (the Welsh equivalent of Nessie). Since the monster itself is rarely glimpsed and known mostly through scraps of gossip, it’s perhaps appropriate that this edition offers only a tantalising taste of the wider project.

All four artists are based in Wales and Southwest England, and all four editions are firmly rooted in the geography and culture of the artists’ localities. Nick Davies says that in commissioning this work, he’s sought to deliver “an alternative tourist information handout, offering people the chance of looking at their surroundings through a different lens.”

At a time when rising costs are driving more and more publishing online, the gift of a beautifully produced piece of print – accidentally encountered – feels almost subversive. It imbues the contents with an oppositional flavour, however apolitical they may actually be. It seems only right that Loophole Supplements emanate from a tiny basement studio in Exeter Phoenix – making it, quite literally, an underground press.

Though driven by a grassroots, DIY ethic and given away free, Loophole Supplements don’t feel in the least bit throwaway. They ask a modest few minutes of your time, but you’ll tuck them away safely to look at again. The care with which they are compiled, produced and then displayed – plus the presence of those insistent little ‘collect me’ looped staples – sees to that.