Lost you for a sec - a-n The Artists Information Company 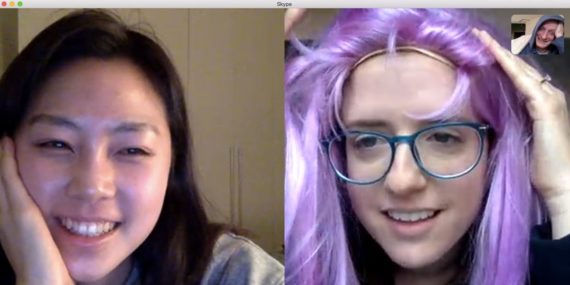 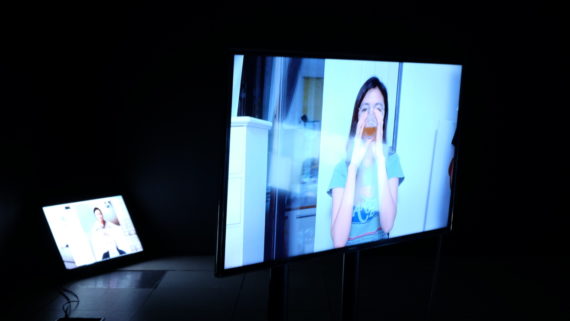 A desktop; an image of a woman’s legs (they are Sam’s legs, I know the image from another work by Sam and Paul) cut off from a reclining body by the open window of a Skype chat. A man and a woman, Eunji and Paul, share this frame — in the corner, in a smaller window again, there is Sam’s face. We’re seeing Sam’s perspective; or her computer’s perspective. As cameras are turned, heads are titled, bodies shift and the captured image rotates in an attempt to correct itself. Three videos each constantly rotating and bodies resisting, testing; it’s pleasantly disorientating, at times vertiginous.

It’s a familiar form of play, one I sometimes take part in whilst speaking to my nieces over Facebook. Conversations with a three year old and a five year old that are often fragmented, hectic, sporadic; wherein flashing emojis, shifting backdrops, filters, bug eyes and animated masks are far more entertaining than conversation with me or their grandma. Recently, my mum asked my brother to prevent my nieces from using these Facebook Messenger features so incessantly, saying she found it too hard to play with them in this way. It can be frustrating, when you want to ask some actual questions, or talk to their dad — but then again, joining them on their terms feels like the only way I’m going to be able get some kind of connection from afar.

This play often results in myself and Megan (the eldest), each involved in their own thing, making faces at ourselves and (only really by proxy) the other. This isn’t idealised collaboration; building something together, bouncing off each other’s ideas or actions — becoming a synchronised or coherent being. It’s a separated, distanced, individual exploration. But, sometimes, Megan or myself, will notice something the other is doing, laugh, and find pleasure for a moment in watching — then we return again to ourselves, attempting to copy, match or better what the other had to offer.

In Lost you for a sec, Sam, Enji and Paul are sort of communicating and also not communicating. Sort of playing together, but also engrossed in their own games and their own image. In the first video (the screen-recorded work described above, the only video in which the primary means of communication between these three artists, Skype, is made most obvious), this independent exploration takes the form of the shifting perspective of their respective cameras, but also in the probing fingers which poke into mouths, eyes, noses and pull at flesh. The bodies before/behind the screen seem to be both demonstrated and absent-mindedly explored — a self-testing made possible by this mutual game. The eye of the webcam searches the sockets of rapidly blinking, moist, tired eyes — which constantly glance back and forth — perhaps flitting between its own image and that of another. There is another moment in this Skype video, where the four of them appear to attempt a synchronised sign out, but there is a lag; a lag that is inevitable to all attempts of synchronicity, perhaps. I’m reminded that these artists met as a students of dance and choreography.

I get the impression that the three videos — set up in the centre of the exhibition space on three distinct screens, the monitors creating a dialogue between the artist’s three faces — are out of synch. Although, at times they appear to relate to each other — often in soft blank, bored, stares and small smiles, moments that are constantly shuffled, missed, and caught only in the corner of the viewer’s eye. The monitors reflect each other and I’m often caught by the movement of another image, flickers on the surface of another screen. The quality of these videos is deliciously crisp and clear — not produced through Skype, so not (it seems) performances produced live for collaborators present digitally. These videos represent a shift from the implied ‘togetherness’ of Skype. The distance, the lag between them seems to be embraced or accepted; but a practice across distance and multiple works becomes palpable. The three share in a body of work, an expansive mass of content, that the projects Vimeo or Instagram attest to. In this pool authorship is shared and individual taste or touch is difficult to determine, yet there are distinct aesthetic differences, a sense of independent enquires. The same content is reused and reframed, allowing for testing and pushing without attribution. The exhibition is more restrained and only hints at the possible manic productivity of boredom in the mass of screenshots and videos that cascade across Sam’s desktop in the first screen-recorded video. 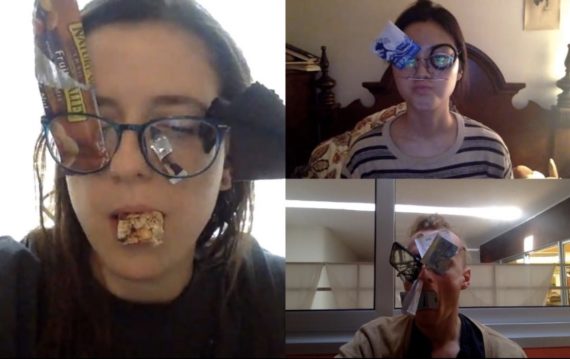 Sam, Eunji and Paul’s actions seem to be more for, or with, each other than for me the viewer. It’s a logic I’d liken to sharing an in-joke with someone unaware of the in-joke (there is the risk of a kind of pointless meanness to this idea perhaps, but I’ll continue anyway). It’s an in-joke performed for us (or re-performed for documentation) but it might only be understood by the three of them. Performed ‘to’ us but ‘for’ each other. Like a dare; it’s intended audience might not even be present. This is perhaps skirting around the question of ‘who is this for?’ — is it for themselves and each other more than anything? Perhaps. But as in the logic of the dare, the outsider/the viewer, is necessary to define the group in the know as the ‘group’, to define the in-joke as ‘in’.

Sometimes I feel ‘in on it.’ I watch Paul balance objects on his tilted head; things found lying around on a desk. It’s a rare moment of anchoring; a point of focus and legibility, a game that is understood — and charm too. I’m conscious of Sam and Eunji’s faces being given less attention, and I notice I kind of defensiveness I have for them. But there’s sly humour as I notice chance moments of Enji or Sam sighing, smirking, shaking their heads as Paul is being more keenly observed.

There is a teenage malaise to this group and the work; kind of moody, tired, careless, vacuous. It’s hanging-out and filling space and taking time and taking the piss. Hanging-out is a stand by activity. Indefinite, open — it isn’t defined by the specific actions of a certain task, or the development of a conversation. Hanging out is absent-minded. People may come and go, conversations could bubble to the surface, but equally the TV is on and everyone is on their phone — a vague and sprawling (non)presentness. Those present get on with they’re doing, share on occasion, but there’s no promise of focus, exchange, or reception.

It can be a generous thing; and the central group of three monitors in Lost you for a sec leaves space for you, and others, between it’s screens. But it’s potentially draining too; or rather, it’s vacancy has a gravity that pulls you in. I’m caught by how tired we all look; those watching, and those looking back from the screen. Fatigue, describes philosopher Steven Connor ‘remains open, just about, to every possibility. That’s why fatigue is so strong — and so tiring.’ (1)

Play, hanging out, fatigue; all these things are defined by a kind of resistant relationship to time — an indefiniteness, a spaciousness; in which togetherness is non-synchronous. This sense of time depends on a lack of intentional interaction; as if to be more involved, too eager or productive, would mean time would no longer be held in suspension. In Lost you for a sec everything loops. Yet — although perhaps not on the contrary — this is also all about making time for other people, or having a lot of time to give or waste (whether it’s a case of lucky enough to have the time, or unlucky to have no occupation I don’t know, maybe both) — but time is spent with others. There’s generosity here too, that I don’t want to forget — and so easily could whilst tied up in the density of attempting to describe it’s spongey, comforting, indulgent, lax, malaise of time, intention and communication. Underneath all this, it remains that these three friends have shared/wasted some time with each other.

And despite the uselessness and pointlessness this work luxuriates in — as pleasingly ‘rebellious’, or attractive, or charming, or politically resistant that might be, or might be read as being — material has been generated, they found things to do, and even if they didn’t do much, they practiced boredom with a kind of rigour. They hung-out and made an artwork, they made an artwork from hanging out. If they are ‘losers’, as they say they are, they’ve been very resourceful ones. 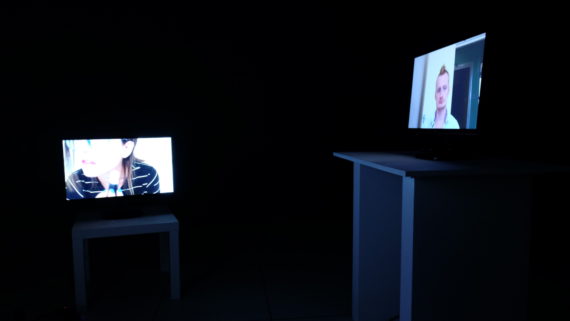 I’m thinking about Internet Art — and how Lost you for a sec is or isn’t relating to it’s artistic context or lineage. Need they? Perhaps, I only come to this out of…  duty? A sense that I should — that I need to contextualise the work like this. I’m not sure I have the credentials to determine what this work might be bringing to the table of Internet Art. But the work isn’t really “about” the materiality of the internet, internet culture and art, or social media, or even necessarily the medium of Skype. There are moments when it seems to refer to tropes, or online culture — the make-up tutorial, selfie culture, the soft searching boredom of surfing. In one moment of Sam’s video in the central triangulation of screens, she puts lipstick on whilst staring blankly into the camera, she then continues to apply it to the rest of her face absentmindedly. It could be read as mildly critical — softly taking the piss of YouTube makeup tutorials — but it’s not dug into. This moment is the works relationship to mass of ‘the internet’ or even ‘internet art’ (that no work could account for and reply to) — this mass is met with a blank stare, (mild) criticality, (absent-minded) boredom and (half arsed) satire. I think instead of Miranda Pennell’s You Made Me Love You, in which a group of dancers shift and shuffle before the slowly panning gaze of a camera, in order to not be lost from it’s sight. It’s about being seen (through the lens and by someone behind it), attracted (to the image of yourself or others) or held (in frame).

Lost you for a sec was exhibited at Phoenix Gallery, Leicester, in September 2018, it is a new collaboration by Paul Hughes (Nottingham, UK), Sam Pardes (New York, USA) and Eunji Sung (Seoul, South Korea).