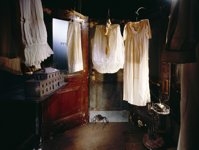 When you leave the Louise Bourgeois retrospective at the Tate Modern in London you are left feeling alone, confused and slightly disturbed. You seem to have questions which cannot be named nor answered; you seemed to have witnessed a truth in which you struggle to accept.

The curators of the Tate Modern have made a fairly awkward selection of artwork and a strange decision by filling the first third of the gallery space with Bourgeois’ early pieces. The Personages are described as representations of the people Louise Bourgeois “had left behind” when she migrated to New York in 1938. They show standing structures of stacked and painted wood, each different from the other but without the emotional impact, the sometimes ironic but slightly irritating provocation of her later work. Although you are confronted with one of those pieces, Cell (Choisy) (1990-3), when you enter the exhibition space, the rest of the first four rooms pass by without remarkable impressions.

The late 60s deal with the subject of sexuality by using obviously phallic and vaginal shapes, as shown in room six and seven. ‘Body’ is experienced as a threatening, almost violent accumulation of sexual organs, blisters, mutations and amputations. Disgust and fascination go alongside each other and create a deep sense of disturbing beauty.

The next room reveals sensations in more than one way. The cells isolate spaces from the space. The intimacy of pieces like Passage Dangereux (1997) or Cell VII (1998) almost invites to become part of the composition, but wire netting or wooden doors deny the participation. Bourgeois plays with the spectator in an almost sadistic and cruel manner which intends to cause pain in both directions. The cells are described as ‘her most autobiographical work’ and simply by examining the objects you start to understand the narrative within; they tell a story about pain and melancholy, hope and desire, a longing for intimacy and its disappointment.

That becomes even more evident in the last two rooms, which present most of her fabric based work. Although or maybe because the figures are handmade, they have the threatening appearance of voodoo dolls. The visible stitches, the patched surface, the almost cramped pose of some of the figures communicate violence and (emotional) destruction. Some of the pieces focus on maternity but show the same angst and terror like the other pieces.

This retrospective could have shown an overview of an impressive career but the selection of pieces and their arrangement do not do the work its justice. The chronological order, especially the extensive focus on her early work, without offering explanations for the following, fails its purpose. The presentation of her textile work in a cheap showcase destroys more of the pieces’ impact than emphasizes it. The only part of the show which seems to have attracted the curator’s attention and effort are the penultimate rooms. They are well arranged, appropriately lit and better selected than the rest of the show. Louise Bourgeois’ artwork tells the story of her life which the curators of the Tate Modern failed to understand. The implicit need to create, to communicate and to direct pain away from herself towards the spectator only occurs to a visitor who is willing to read between the lines and who wants to see more than a bitter, old and angry lady who never managed to solve her childhood conflicts.