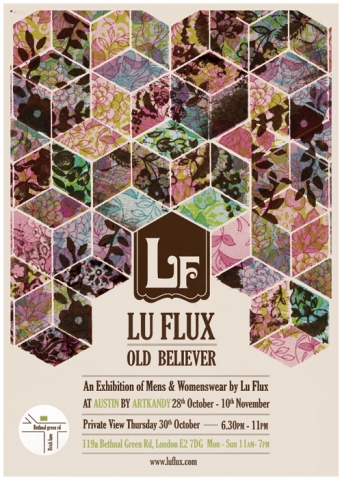 Located at Austin by Artkandy on Bethnal Green Road, Lu Flux: Old Believer is an exhibition of garments constructed from salvaged, vintage, organic and new fabrics. Lu Flux, a London based clothing designer whose work won the Ocean Terminal Scottish Fashion Graduate Award in 2006, aims to create individual clothing that stands outside the confines of how fashion is traditionally deemed. She has an interesting manifesto that touches on the affirmation of sartorial splendour against the mass production of the disposable world. Her aim is to create something new out of something old, to reduce waste and consume less.

The exhibition space combines a stylish café on the ground floor with a gallery beneath that is relatively small and falls into the trap of being far too pedestrian for the work that inhabits it. The white cube surroundings become hackneyed when filled with such otherwise stimulating work, the artificial lighting swamping objects of excruciating intricacy and detail.

Thankfully about five minutes into my visit there is a power cut and all the lights go off. No doubt an understandable distress for all involved in the organisation of the exhibition I felt it opened up other more interesting avenues. Key to Lu Flux’s objectives is the salvaging of existing materials and the re-use of objects. By suffering a power cut members of the audience were forced to re-acquaint themselves with not only the work but the space it was presented within. This succeeded in effectuating Lu Flux’s aims within a wider context because we were almost re-imagining or re-using our experience.

Several temporary lights were placed on the floor of the gallery and they provided a much more natural inflection to the proceedings. The organic nature of Lu Flux’s work seemed to command the space and create a warm, almost homely atmosphere. I have to admit, this isn’t usually the stuff I go for but in this unusual setting the work struck a chord with all present. There was something quite aberrant about this experience but this absurdity only helped to qualify the success of the pieces here.