Standing in a darkened room on a dais in front of a full length video screen, filled with an elusive shadowy void, and placing your hand over a luminous blue spot of light requires an act of faith, a willingness to confront the unknown, to connect with another world and the world of another.  And there was a response.  Slowly, the outlined silhouette of a woman standing in the background of the projected space moved forward and into a path of chiaroscuro lighting. The woman achieved form, character and presence.  No sound emanated and no words were spoken.  But, in a careful measured action, she raised her left hand and placed it against mine, on the opposite side of the screen, all the while gazing calmly and steadfastly into my eyes, utterly fearless.

To beckon someone with the touch of a hand is one of the most instinctive, unmediated of human actions. It implies the intimacy of one to one interactions at the sensorial level, and was one of the most arresting qualities of work by the Australian artist, Lynette Wallworth, exhibited at the International Festival d’Art Lyrique, Aix-en-Provence.  The scope of her practice extends across video installation, photography and film, drawing out the multiplicities of the interconnected relationship between human subject/viewer, and the surrounding world.  Technology is employed to facilitate a heightened perceptual interface between the viewer and realms of scientific knowledge and metaphysical, even spiritual, experience.

Wallworth has exhibited extensively within Australia. In 2006, her work was first shown in Europe at the ‘InBetween Time Festival’, Arnolfini Gallery, Bristol, followed, in the same year, by a solo exhibition at the ‘New Crowned Hope Festival’ in Vienna.  In early 2007, she had a solo exhibition at the National Glass Centre in Sunderland, following an Arts Council England Fellowship residency, and her London debut with Hold: Vessel 2, 2007, occurred at the BFI Southbank Gallery.  In June this year, the 60th International Festival d’Art Lyrique, which centres on the performing arts, opened in Aix-en-Provence with an associated programme of visual arts.  Alongside a schedule of concerts, recitals and opera, Festival Director, Bernard Foccroulle, invited Wallworth to present her first solo exhibition in France, which was realized in collaboration with the London-based leading international production agency, Forma.

The last occasion the visual arts featured was at the first Festival in 1948, with an exhibition of early twentieth century artists, such as Derain.  The Aix-en-Provence region, with its clarity of Mediterranean light, was epitomized in the paintings of Cezanne, and Wallworth perceives a thread of affinity across time in terms of the light obsessed quality of her installations and even the light based nature of video technology.  In the Musée des Tapisseries, a former archbishop’s palace located in the town centre, and dating from at least the Middle Ages, three immersive video installations by Wallworth unobtrusively dwelled in rooms accessed by a stately Baroque staircase.

In Hold: Vessel 1&2, 2001-2007, light pierced the installation space with an almost visionary presence, reminiscent of the focused penetration of a single light source in many of Caravaggio’s paintings.  Before entering the space, the viewer was invited to ‘take a bowl and enter.’  The dimensions of the space were barely discernible, except for four vertical shafts of light from the ceiling, and the bowls were ceramic and fragile, necessitating a tentative approach.  However, as the viewer walked under each light beam, gradually enveloped in a surreal soundscape of fused organic sounds, evidence of brilliant life flashed into the bowl.  Reflections, as though seen through a microscope, revealed the exquisite, minute structures of marine life.  Fluorescent multi-coloured forms dilated and metamorphosed in a chain of natural energy that left the viewer intimately engaged, but equally in a state of mesmerized wonder at the immense complexity of the natural world.  The imagery derives from the Great Barrier Reef, located off the coast of Queensland, and was the main element of the initial version of this work created in 2001.  The artist cites the profound influence of growing up in Australia, a vast continent where the ancient presence of the land and its surrounding oceans determines the scale of relationship between man and nature.  “It is humbling influence, because you cannot raise your human head too high without being reminded by fire, drought or flood that not everything is in your control, and, perhaps because of this dominance, it is easier to see the systems that connect across the country.  My work, in particular, has been influenced by the coral reef system and the complexity of this network of species that lives in symbiotic relationship one to the other.”

In 2007, the artist updated this work, adding rare imagery of the 2004 Transit of Venus, an event, which, in 1769, became the focus of unprecedented international cooperation in a joint scientific aim to calculate the scale of the solar system.  At one level, it is possible to perceive a correlation between Wallworth’s concern for fragile, diverse and adaptable ecological systems, and the way in which her own works continue to evolve in an open creative dynamic.

But beyond intimations of enlightened scientific discovery, an equally powerful sense of mystery pervaded, alluding to a more ancient understanding of the world. There were connotations of alchemy through the metamorphosis of matter and transmission of energy, and in the way natural and synthetic elements were combined in a way suggestive of magical transformation.  After all, the revolution which occurred in scientific thinking during the sixteenth century, and resulted in a view of the universe based more substantially in mathematics and mechanics, evolved from previous magico-animist theories.

Echoing more directly the historical character of the museum site, Invisible by Night (2004), spoke of elusive threads of emotional connection between past and present.  A full length video screen at human scale, installed against a wall in a dimly lit room, glowed with a haunting blue twilight and a mysterious film of condensation across its surface.  A figure of a woman in the background occupied a melancholic, shadow-filled space.  In response to touching the screen, the woman slowly turned and walked toward the viewer.  A pale light circumscribed her long, fitted dress and face immured with the shadows of grief.  Raising her hand, she slowly wiped her finger across the other side of the screen from left to right revealing only her eyes that gazed in a fixed otherworldly stare.  She peered through the smear of clear glass, silently searching for someone, something, seeking connection. As her hands fell, leaving a trail of finger marks on the screen surface, before turning to retreat, once again, into her own world, her absence was replaced by running drips of moisture.  Was it she, or the window that was crying?  Was she the one grieving, or being grieved for?  As Wallworth intimated, “human beings are as complex as the natural environment, surprising and formidable and fragile.”

Invisible by Night was originally commissioned by the Experimenta in association with the 2004 Melbourne International Arts Festival, and embodies the artist’s response to the site of the Melbourne Visitors Centre, previously the location of the Princes Bridge Morgue between 1871 and 1888.  For Wallworth, the viewer completes the work, the life and dynamic of each installation being dependent on an activated connection between viewer and subject.  The discreet use of responsive technologies is an effective tool, but “gesture is key to this involvement of the viewer. I am fascinated by core gestures that are familiar to almost all of us, despite cultural difference”, says Wallworth, gestures that also catalyse an emotional journey for the viewer in unexpected ways.  The history of video art, and video installation in the twentieth century maybe traced through different routes of concern and methods of employing the medium.  However, while Wallworth’s work may have affinities to concerns for the poetic, the lyrical, even issues of identity, it is not directly an extended space of the self, except in terms of recent discourse about the littoral, the space of the ‘inbetween’, zones of meeting and encounter.

Reaching across language and difference was central to Evolution of Fearlessness (2006), the third installation, which required the viewer to initiate an encounter by stepping up to a dais and touching a small spot of blue light.  The ensuing moments of enigmatic engagement as, in each instance, a woman in the video was prompted to walk towards the screen and meet the hand and gaze of the viewer, suggested the resonating impact of interaction at the individual level.  Created with film portraits of 11 women, most of whom are political refugees from countries such as Afghanistan, Sudan and Iraq, now residing in Australia, it is a powerful testimony to human resilience.  If eyes are windows to the soul, they also facilitate recognition of the vulnerability, sorrow, uncertainty and resilience that unites our common being.  Providing another avenue into the consciousness of the women, and a shared space of experience, was a small booklet containing the personal stories of each of the women, offered to visitors at the exhibition.

2008 has been designated the European Year of Intercultural Dialogue by the European Commission, and the International Festival d’Art Lyrique is part of a programme of events intended to promote knowledge and awareness of the complex cultural environment that informs every aspect of life in our contemporary world.  Evolution of Fearlessness was commissioned for a different context, the ‘New Crowned Hope Festival’ in Vienna, where Wallworth was invited to respond, as she states, to the themes “that influenced Mozart’s work in his last year of life; magic and transformation, forgiveness and ceremonies to honour the dead.”  However, in prioritizing communal ways of meeting that rely on unmediated cognition, at the same time maintaining respect for layers of difference, this work contributes perceptibly to concerns of intercultural dialogue.

Layers of difference and resilience of the human spirit are also key to the Australian context and its entire population.  For over 40,000 years, this immense continent has been the land of the Australian Aborigines, the first inhabitants.  Over the past more than 200 years, this land, beautiful, harsh, confronting and generous has been the destination of many immigrants.  Recent history is one of innumerable journeys from every corner of the world.  It is, therefore, not surprising Wallworth agrees that recent political debates about immigration and asylum seekers, in Australia and other parts of the world, had a tangible influence on the development of Evolution of Fearlessness.  She recognizes the fear tactics employed by the previous Australian Government in response to boat loads of refugees that have arrived on Australia’s shores over the past few years.  “It’s very difficult to confront these fear tactics once they become mediated, but it’s a very different thing to look someone in the eyes and maintain those prejudices…” As she elaborates, what “…about the next round of refugees we, as a global community, will need to embrace.  What do we say to environmental refugees whose homelands have been consumed by rising waters?”  Fearlessness, it would seem, will be an asset in confronting some of the challenges of our century.

The art of Lynette Wallworth has been the subject of critical acclaim, is sought by curators worldwide, and this show did not disappoint.  The Festival in Aix-en-Provence was an opportunity to engage with three of her video installations in an intimate setting, where intensity of human encounters, even that of handing a bowl to someone, achieved a lasting resonance.

Undoubtedly, the deeply collaborative nature of Wallworth’s art practice, involving artist, subjects, viewers, producers and many others who have informed the journey of this work, is a critical element in this exhibition.  Forma, the cross disciplinary production agency that has developed a collaborative relationship with Wallworth, ever since she began exhibiting her work internationally two years ago, will be presenting her next exhibition at the ‘Mostly Mozart Festival’, Lincoln Centre for Performing Arts, New York, 31 July-17 August 2008. 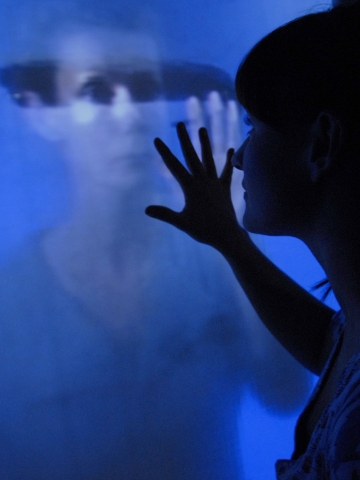