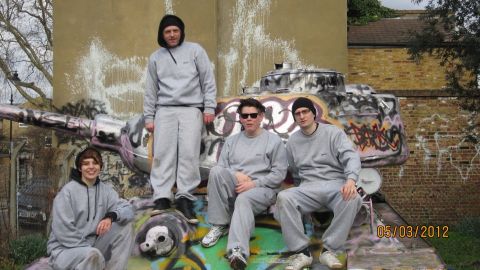 Militant Training Camp was the brainchild of Thomas Bresolin, a recent graduate from Goldsmiths College.  Bresolin took four artist volunteers (of which I was one) to participate in a series of performances at Arcadia Missa Gallery in Peckham on the 8th, 9th, 10th, and 11th of March. What he didn’t know was that I had my own agenda as observer and critic – aiming to gather data, case studies and interviews on militant artists for my PhD.

Before the performances could happen Bresolin needed to set up an experiment – could he instil in his participants the militant mind-set needed for the performances in just one week?  Bresolin opted to mimic aspects of fundamentalist military training camps: he provided uniforms for the artists and confiscated their mobile phones; kept some information back so they were never quite sure what was going to happen next; he subjected them to a strict daily routine of exercise, a basic diet of mainly rice, and mental indoctrination through watching at least two films or documentaries about resistance, militancy, anarchism and revolution.  It was important to Bresolin that this was a residential camp, so that the experience was as intense as possible and so that no one could go home to their consumerist luxuries.   To this end all the artists slept in the gallery – or tried to as the gallery is located in a railway arch with trains thundering over it all night, and the temperature dropped to as low as minus 2.  In addition, before the public performances began, the camp made several off site visits.  The first was a walk to the recently vacated St Paul’s protest site where the group discussed the limitations of the Occupy movement before visiting the Finsbury Square site.  Under strict instructions not to talk to the public during any of the excursions, the militants assumed a subservient role to Bresolin – who did all the talking.

The next trip was to Colorama for a film screening and “discussion”.  Colorama is a long-term political squat, bicycle repair shop and cinema – famous for its ‘unemployed cinema‘ series (Full Unemployment Cinema – Free Film Screenings in South London Against Work) and lack of heating.  After the screening Bresolin surprised the squatters and militants alike with a passionate call to arms (during which several people walked out) and by announcing that he would unveil his plan for an insurrection in South London at the Haygate Estate.  The militants then promptly left.  Once at the Haygate Estate Bresolin produced a scarily detailed plan drawn onto a large map of London.  The briefing lasted quite some time and it was at this point that I felt like a tourist for the first time during camp: hanging out in Peckham railway arches and (admittedly abandoned) south London Council Estates seemed somehow disingenuous for a bunch of artists.

The next excursion was a trip to the Anarchist Book Shop “Freedom Press” in Whitechapel where Bresolin had hired a meeting room and booked a guest speaker – his father Ian who gave a PowerPoint presentation entitled “No Banks” and called on us to consider Native American social systems as alternatives to capitalism.  Bresolin senior’s passionate attack went off on tangents, sometimes conflating and confusing contemporary concerns about banks with concerns about government and democracy.  True, there are links but I left feeling a more focused attack on banking itself would have been more helpful.  A link to xat.org, on Ian’s “No Banks” blog, provided just that (and excellent further reading).  By this point I, like all the militants, was tired, cold and my knees had given in from all the exercises.  My lips had cracked from sleeping in the cold and my morale was low.  I was beginning to question whether Bresolin’s experiment was working…then came the performances.

You can read a full review for the first night of performances entitled Propaganda of the Deed here.  It was well attended and shockingly simple and effective.  Bresolin punched a seated girl in the face for a full five minutes.  Then Alexis Milne, another militant, performed his bizarre There is a kettle in our heads and it must be destroyed which comprised of a lecture linking militancy to length of hair followed by a group performance in which participants dressed as either, on the one side, police, police-horses and police-dogs and on the other famous historical militants and revolutionary writers and theorists.  The participants re-enacted a kettle situation before the police (mainly played by the militant artists) broke down into a moshpit boogying to punk music.

The following night Bresolin took things a step further.  This time the violence would be inflicted on him.  Fellow militant Charles Stanton-Jones (a recent graduate from Central Saint Martins) seated Bresolin in the same chair, in the same spot where Bresolin had punched the girl, while prison blues music wailed woefully in the background.  He stripped him to the waste and cable-tied him to the chair before shaving two patches, one on either side of Bresolin’s head.  The audience watched in silent anticipation as Stanton-Jones, who was wearing his militant uniform and a balaclava, attached electrodes to Bresolin’s head, chest and arms.  With Stanton-Jones facing straight forward and not even looking at Bresolin, a PowerPoint presentation began – projecting images over Bresolin’s body while Stanton-Jones electrocuted him.  The PowerPoint consisted of a strange mix of images, news footage and movie-clips.  The electrocution/presentation lasted for thirty minutes.  In contrast to Propaganda of the Deed, where the longer it went on the worse it got with every punch, the shock of this performance actually began to wear off and even get boring the longer it went on.  The problem was…some of the video clips and news footage were actually quite interesting and, as you couldn’t actually see the electricity, you were drawn in to watching TV and ignoring the torture going on right in front of you – and that, for me, was the genius of the performance.  Bresolin really managed to bring home just how quickly the media is able to aesthetisise violence, and how easily we can choose to ignore suffering in favour of TV.  Bresolin did wake us up at various points, when the movie clips stopped and we were faced with graphic images of violence and consumerism, sometimes he would convulse pugnaciously or foam at the mouth drawing attention to the fact that he was clearly in some pain.  This was brought home all the more forcefully when the presentation finally ended and Stanton-Jones leapt into action quickly cutting the cable ties and electrodes before dragging Bresolin out of the gallery with urgency, to safety.

The final performance was intended to signal a kind of graduation from Militant Training Camp.  During the public opening a sixth militant suddenly reversed a van into the gallery.  The militants, who were all wearing uniforms and balaclavas, jumped out, under instruction to beat up Bresolin for two minutes before throwing him into the van and driving away.  This was supposed to signal a rejection of his leadership so that the group could become one of equals, in the vain of an anarcho-syndicalist autonomous commune.  The beating was real and performed with gusto but didn’t last the full two minutes – signalling sympathy, camaraderie perhaps? In any case the speed with which the performance was executed only added to the shock factor as the audience was left baffled by what they had just witnessed.

The finale of the project occurred on Sunday 11th March with an exhibition featuring Bresolin’s South London Insurrection Map, his Militant’s Flag, all the detritus from the last week and a documentary film of the project as a whole.  Only time will tell if the documentary can stand up on its own, screened away from Arcadia Missa, the place of it’s creation.  As it always the case, it is difficult to capture, or sum up a whole week’s work, a journey and a mental state of mind in a short space of time and, as a participant, I am not in the best position to judge the effectiveness of the exhibition – as I am too familiar with the significance of the objects, stories and performances that were on display.  For me the exhibition is not, and cannot be the end.  In reality the final exhibition was only one of several “exhibitions” or events that occurred over the week.  The success of this project will lie in how it endures, be it through legacy publications, mythology and rumour or an extension of the project.  How will the South London Insurrection pan out?  Will there be a Militant Training Camp 2: the first assignment?  Can such a project exist as an exhibition alongside the work of others (perhaps not connected to the project)?  The fact that there are so many questions surrounding what happened at Arcadia Missa is refreshing.  Militant Training was the beginning of something – let’s see how it develops.