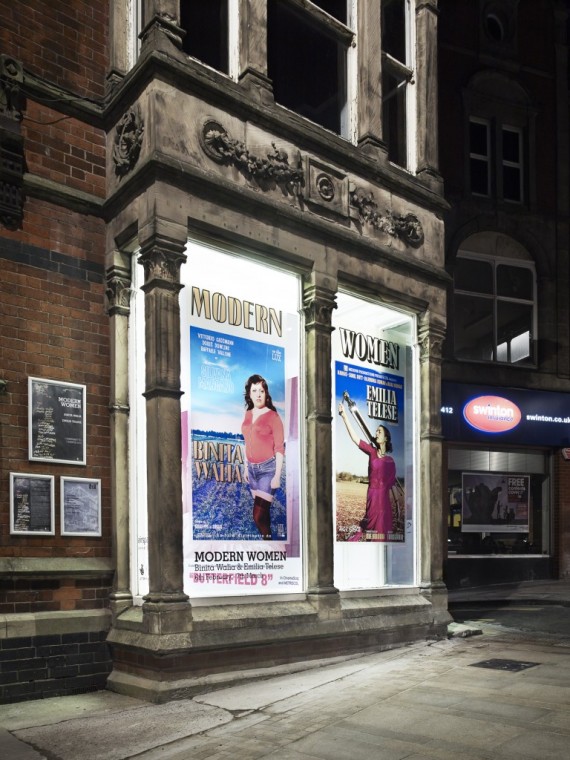 It is shocking to discover in the 21st Century that whilst women make up almost half of the wider UK workforce, they are neither paid on equal terms to their male counterparts nor are women represented in sufficient numbers in the most powerful and senior positions in politics, education and the arts.

A new exhibition and collaboration between artists Emilia Telese and Binita Walia is a response to this, providing commentaries and insight on how the role of women is shaped and constrained by social, economic and political contexts. Entitled Modern Women the exhibition draws together a series of individual but connected pieces by each artist, these informed by their cultural identity, contexts and personal experiences, to form a cohesive installation at artist-run Airspace Gallery in Stoke on Trent.

Binita Walia’s meticulous approach to concept design, contextual research and production gained through undertaking a portfolio of large-scale glass commissions has been brought to bear on art works such as Too busy. Here, she has repurposed and reworked her grandmother’s 50s sari adding to the fine chiffon fabric in gold acrylic one of her handwritten ‘to do’ lists, to form a new decorative border. Presented pegged like washing on the line, the work conveys notions of women’s domesticity, this emphasised as the work can also be read as a room divider, separating off what might be construed as a private space beyond. I found particularly compelling her video Forewarned is forearmed in which a pile of sumptuous wedding saris are handled and viewed whilst the narrator – the artist herself – recounts items from the ubiquitous ‘to do’ lists which pervade her life but which ensure the smooth running both of her art practice and her role as dutiful mother, wife and daughter.

Whilst this form of fine art practice and political approach is relatively new to Walia, Emilia Telese’s performance and site-specific work over the last decade has often drawn on her family and personal narratives. In Sacra Famiglia she has raised ordinary family photos into the status of religious icon, with skilful lighting and digital techniques giving them a soft-focus reminiscent of Renaissance chiaroscuro. Alongside, the installation Femminicidio (a term which translates as the killing of women by their husbands), has transformed Airspace’s toilet into a prison cell. The fold-up bed, basic cooking facilities along with pinned up scraps of memorabilia and letters, the clothing hung up to dry on an impromptu washing line, collectively convey a desperate attempt to remain human whilst being held against her will.

The use of adjusted movie posters has been a mechanism which Telese has successfully employed in the past, an example being a series featured in Modern Women in which the artist is portrayed in the siren pose and brand of Elizabeth Taylor. Building from this, the Modern Women film posters presented prominently on the street-facing gallery windows is the sole work in the show to be have been created collaboratively. Here, the two artists seized the opportunity to recreate two larger-than-life portraits that place themselves as lead actors and heroines, by doing so appropriating the format of film posters of the past from their countries of origin India and Italy.

Works in Modern Women are pursuing concepts and paths first explored by feminist artists over forty years ago. In the 70s, it was the very medium of art making that was identified as a key issue for women artists attempting to carve out a space for themselves within contemporary visual arts. Pioneers such as Laura Ford – previously a painter and sculptor – purposefully who took up performance and dance as her way of dragging ‘high’ art out of the galleries. Later on, Helen Chadwick commented that she felt unable to use the ‘traditional’, masculine material of paint because of the connotation of mastery and authority. She instead employed the ‘new media’ of photography and installation, and looked beyond the traditional and male-dominated gallery scene for her public space. Thus Chadwick’s Wreath to pleasure – an installation of fifteen hundred tulips, engine oil and a plum – was realised as a still-life photograph, and commissioned by the BBC’s 1992 Billboard Art Project.

Significantly, it was a 1992 cover of what was then known as Artists Newsletter that gave voice to Fanny Adams. This was a sizeable group of established women artists aiming to “Put you in the picture” and whose research into London’s top commercial galleries revealed a new kind of female vital statistic, namely that “in 1991 83% of solo shows went to male artists”. It was around the same time that Rebecca Fortnum pointed out that despite nomination for artists including Helen Chadwick and Paula Rego, a woman had never yet won the Turner Prize. This was not to happen until 1993, when Rachel Whiteread was the winner. However, since inception of the Turner Prize, 75% of winners have been male.

Looking at today’s context reveals that 67% of the art student population is female and surveys including by a-n indicate that 71% of those who work professionally as artists are women (1). But whilst 80% of curatorial and educational roles are held by women, within the top 20 Arts Council England funded galleries 70% of leaders are men (2). Interestingly also, the Paying artists research has shown that male artists are also more likely than female artists to get payment for exhibiting, in that 36.7% of male artists reported getting a fee compared with 26% of female artists (1).

Although not specifically referenced to visual artists, an Arts Council report from 2013 (3) sets out a key factor in rebalancing the role of women in the arts in general. “Female leaders within the creative and cultural industries report that factors that have hindered their progression include poor job opportunities”. Significantly though, it was found that the nature and expectation of the working environment in the arts was the biggest inhibitor to ensuring gender equality: “Research suggests that many arts leaders do not take career breaks, have never had a major caring responsibility and have done little or no part-time work over the course of their career. These features confirm the challenges that some women can still face in balancing family and career.”

There are many voices now calling for some cultural rebalancing of outmoded habits within the publicly-funded arts, this predominantly couched in in terms of geography and ethnicity. However, the issue of ensuring equality for women – who it should be noted are clearly in the majority in the visual arts – should not be overlooked. Modern Women makes a persuasive argument for such a change.

Note that material referenced in this review from 1990-1992 on early feminist artists and issues has come from the a-n archive of magazines and publications.