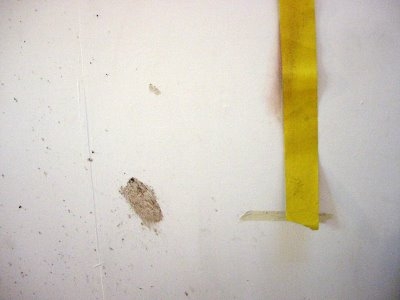 Where is the dust from? It is from you, them and me. We distinguish into dust and wake up in the same skin that makes our dust each day. Every day in the dust you distinguish. Kapka Kassabova, ‘Mirages’, in Neil Ashley, Staying Alive;2002

Gathered on the fourth floor of a warehouse overlooking a building site that will eventually become London’s Olympic village. Skeletal structures, giant heaps of sand and holes that are patrolled by men in violent green jackets and yellow helmets. Following a long corridor to a set of ladders and a rectangle of sandpaper pinned to a white wooden wall.

Walker’s performance work is short in its duration, though it is easy to imagine how his discreet actions could be amplified through repetition. It is perhaps appropriate that his actions are seen as anomalous and isolated. The parameters of his performance are cut and comparative to the carefully crafted snippets made by a film editor. Celluloid strips that can be infinitely looped.

Nathan is a caretaker. However, his shirt is ripped off and thrown to the ground and lies in a crumpled heap. Standing square to the wall he turns side on and rubs his upper arm and shoulder against the sandpaper . Skin tears and breaks. Specks of blood and moans of discomfort. Epidermis dust clouds hang in the air.

Ascending stepladders with a plant and turning to the wall. The plant is hurled with force and indents the white surface. Black earth spills all over the floor and lines the angle where floor and wall meet. The action ends. The audience are perplexed and struggle to unravel a puzzle. An enigma where the domestic and the natural, the violent and the composed are confused and combined. Unwanted gifts, necessary approval and abuse, mistrust and retribution. Walker’s symbiotic exchanges with inanimate objects and household utensils offer a purging; a compulsion to re-encounter past traumas rooted in the familiar and the local. Their release is not therapeutic though – his encounters are projected onto collective consciousness and trigger complicit cycles of remembering and regret.

The remaining patches of dirt, skin, roots and leaves suggest a half scrambled code of calligraphy, a writing practice that foregrounds motion and emotion – abrasive and fluid – that borders on the edge of catastrophe.

No more memory. No more volition. No altruism. No grief. 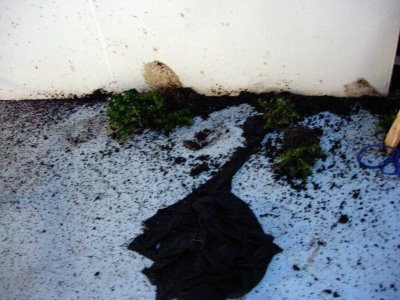