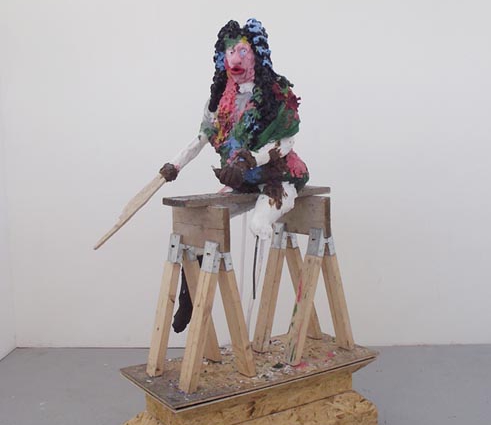 The arrival of Nottingham Contemporary as a ‘flagship’ international venue over 5 years ago had a seismic effect on the state of the arts in the city. Firstly it re-defined the notion of ‘big’ for the city, just like other ‘flagship’ mega cultural temples popping up all over the land.  Previous ‘big’ venues regional like Liverpool Tate suddenly felt smaller and low ceilinged by comparison. Indeed  ‘Ikon’ now comes across as bordering on the Bijou and intimate.

Secondly it shook up the power structure of art in the city. High ground venues from the previous decade became middle ground by default and other venues got swallowed up in a funding vortex. Akin to the bow wave caused by the arrival of a major new shopping centre, like say the Westfield in Derby. Much gets displaced in this process. But that is another story.

Thirdly it has bought some amazing and typically intelligent art to the city of a major international status. Indeed this is its curatorial bag. Chuffed as I am with all this, there is much else afoot in town. This is far less predictable and driven by something very dear to my heart, ‘grass roots passion’.

On the edge of and Nottingham city centre and Sneinton, in a skint part of town, evocative of  the Iggy Pop lyrics ‘He sees the city’s ripped backsides’. One stumbles across what I can only describe as a beautiful anomaly. One can expect to see a studio group in a post industrial building. Nottingham has always had plenty of these. One can generally expect them to have a Gallery or project space to help fill the opportunity void.  DIY is still for most of us the best way to get going. But to be staging shows and artists that are normally the province of the flag ship venue or biennale, well that is quite frankly something else.

What Backlit appear to be avoiding is the mutual art swap CV generator/piggy back strategy that has arguably defined many other art space galleries. There is nothing wrong with any of those strategies, but their transparency of motive oft kills the poetic potential. For me the true art of self-aggrandisement is in the invisibility of its execution. Then for others to bestow value. The danger of blowing your own trumpet too hard is that someone just might notice you can’t really play.

Not so with Backlit. Backlit is currently outstripping much bigger fish across the UK in its quality and ambition. From the outstandingly  witty ‘Zimoun’ show through to the sublime presentation of Robert Wilson’s ‘Einstein on the Beach’ an iconic sound and sculptural work in collaboration with Phillip Glass, which Backlit Director Matt Chesney managed to bring over from Paula Cooper New York on route to Pompidou Paris. Let’s just reflect on that for a moment, New York (major international Dealer), Sneinton (midlands artist space) and Paris (international flagship venue). It makes me grin from ear to ear. Their Preference to bring in the extraterrestrial to punctuate the provincial is delightful.

That and the impressive efforts of the other key spaces in Nottingham as a force to be reckoned has been recently recognised with is the arrival of the Bloomberg New Contemporaries 2015 at a consortium of three artist led spaces, Primary, Backlit and 1 Thoresby Street. Under the title of ‘New Midland Group.’ All three spaces are managing to make the local, international by their efforts. The decision to join forces rather than compete is a wholly smart move.

To Launch such a high profile show in Nottingham’s inner city jumble. That which manages to segue hope and dereliction, before marching down to London, the ICA and The Mall. Just a stone’s throw from the Queen’s house. Is as far as I’m concerned bloody marvelous. It is without question, something big, something worthy of celebration. And in a curious way, this almost eclipses the exhibition itself. But I guess I’d better mention the show as well.

Highlights for me include: Jamie Fitzpatrick’s, A Sculpture of a Horse Freed of Carrying around its Rider.  Which is an exuberant life sized depiction of a figure on a horse looking close to Charles the Second in appearance. It is dripping with crude impasto wax, like a madcap Frank Auerbach rendered sculptural. The lower part of the form is crudely fashioned pout of USB and ply and suggests the form of a classic life studio donkey. It playfully takes the piss of historic horse portraiture but does so with enough panache to carry it off with aplomb. (At Backlit)

Sophie Gille, who creates visually enticing canvas like forms out of squashed umbrellas. The reward as a viewer comes for me via her sublimation of the form into a textile canvas, which only reveals itself as subverted ready made on close encounter up encounter. It is redolent, though from different departure point of Mike Kelley’s seminal ‘More love hours than can ever be repaid’ It holds the eye (At Primary).

And Abri de Swardt whose ‘I’ll never war sunglasses again’ is a captivating film of hench males, sporting only the crudest of beige pants, shot against a white screen. The action is deliberately stilted and the dialogue makes one think early Shakespeare. I am minded in part of the gods in ‘Jason and the Argonauts’. The narrative is somewhat oblique but touches on human frailty and issues of heroin addiction via the proxy of Leeches laid on arms. It is the kind of film that ideally deserves several viewings. Ambiguous yet bewitching (At One Thoresby Street).

All three venues deserve a butcher’s. All three also offer intriguingly differing models of artist space strategies. I watch with interest to see who will head up the Nottingham Contemporary for its second era, but I watch with greater excitement to see what next will come out of this inner city activism of sheer unabashed creative passion.