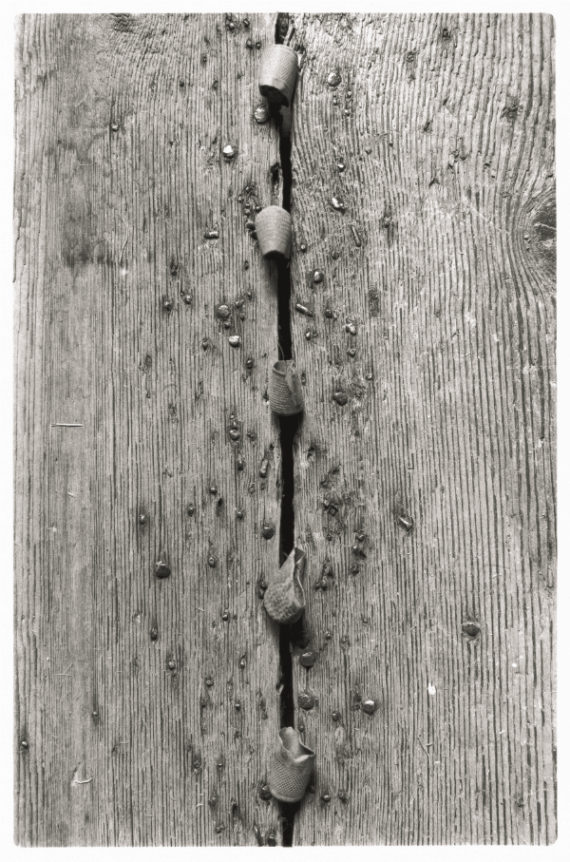 Sneaking in to preview an exhibition before it’s officially open can be a mixed blessing. Yes, you’re free to look at the art unmolested by the mass of others trying to do the same but you’re then denied the chance to eavesdrop on their initial, unguarded responses. And sometimes, only sometimes, by creeping in early, you’re also privy to seeing something that is not part of the show’s intended narrative. Knowledge that, once gained, try as you might, you can’t but help it having an indelible impact on how you encounter the work.

The jeweller Romilly Saumarez Smith and the photographer Verdi Yahooda’s show Newfoundland is due to open in Ruthin Craft Centre’s Gallery 2 in two hours. A bench, scattered with half-opened packets of business cards, scissors and little plastic zip-lock jewellery bags, has been pulled across the archway to prevent public access. Three women at the far end of the gallery, one of whom is in a motorised, high-backed wheelchair, are deep in conversation, with one of them, every now and again, pointing at an object in a Perspex fronted wall-case that stretches across the back wall.

Intensified by its sparse curation, Gallery 2’s whiteness has become larger, emptier, typifying the title’s wintry hinterland. Other than the two monumental lidded-plinths on the floor, one horizontal, the other vertical, the tiny jewels are wall-hung, caught behind white-framed glass or unframed Perspex. Akin to pebbles sunk deep into snow, they seem cloaked, enveloped, removed from reach by white. And Yahooda’s silver gelatin prints, though black and white, have none of the sharp contrasts usually associated with monochrome photography. These images of the jewels seemingly embedded into thick, grainy oak floorboards, with most bleached-out, faded, ghostly.

Newfoundland is clearly a collection about collections – a realisation that makes one begin to rethink the title, testing it in the mouth, breaking it up into syllables, separating the words: new found land. Antediluvian flotsam – Anglo-Saxon finger rings, Mediaeval turret brooches, thimbles, shoe buckles, belt buckles, knife handles, nails, pins and spoons – made precious, be-jewelled with diamonds and seed pearls, embellished with gold, silver and coral and given new stories, made wearable. Thimbles are metamorphosed into crustaceans, anemones, jelly fish – the ossified remains of rock pools, hermitages. Broken agate knife handles sprout grassy, spiky cactus-like feelers. A Roman toga pin buds with a seed head. The craftsmanship is superlative.

However, juxtaposed against the assemblages of re-worked jewels, on the long, table-like plinth, in the far centre of the gallery, are rows and rows of miniscule, seemingly trifling archaeological finds. Still in their raw state – oxidised, patinated, chipped and shattered – these, as yet, remain unaltered by the jeweller’s art. Rendering the jewels as abstract objects, with no reference to the human body for which they’ve seemingly been formed, Yahooda’s photographic interpretations bring their function into question. Set against the plinth’s untouched metal detector discoveries, do they not too become merely curios, to amass, to wonder at and then lock away in cabinets and drawers?

The three women are still clustered by the back wall-case. Another thing that turns up all the time is watch winders, the one in the wheel chair is saying. A tall woman, her dusky hair raised high in a chignon, she’s exquisitely dressed in a brocade jacket, a lace ruffle at her neck and pointed silk shoes. One of her companions, a thin woman in black, inclines her head reverently. The other, a blonde, unsmiling, hangs back, slightly apart. The chair hums and jerks forward towards the table plinth. You know that expression, pin money? The woman in the chair is asking as her entourage follow close behind.

Scanning the exhibition booklet and accompanying essays, the identity of the mystery woman is clarified. Without naming the disease, the texts explain how Saumarez Smith doesn’t actually make the work, but, rather like the Grand Masters of the past, acts as overseer, director, choreographer to her three amanuenses. They are her hands, one touch removed.

And that is it, the knowledge one didn’t want to have. Unbidden images from myth, fairy tale and folklore – of handless maidens biting from silver pears, snow queens freezing the hearts of young boys and be-witching baba yagas flying through the forest in their pestles and mortars – rush forward, threatening to engulf. Too much. And as the integrity of those first, innocent impressions is lost amongst a blizzard of white noise, the absence of the body and that other-worldly, detachedness of the Newfoundland show becomes, albeit unintentionally, profoundly symbolic.