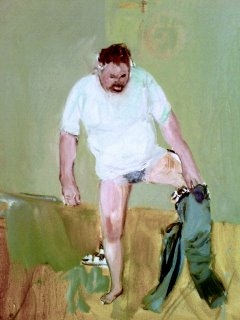 Horst is a sixty year old 18 stone drag queen whose idiosyncratic response to Nikola Irmer’s habit of advertising for models in the personal column of the local paper initiated a three year collaboration. The resulting paintings depict Horst’s creation of a spectacular drag persona; the domestic context of Apartment facilitating an intriguing intimacy to this encounter with a series of works that delves into a usually elusive transformative process.

The cosiness of an art show taking place in the domestic setting of Apartment is of course somewhat disingenuous and deceptive; the gallery and its location always complicit in its playful ambiguity and sense of the absurd, and in this show in particular the traditional 'frame' of paint and canvas adds to the queerness and confusion often accompanying a visit to the tower block. A 60’s modernist design, it has the feel of a clean white cube but is also a fully functioning home, and one too cramped, too snug to be either an impersonal temple to art or the festival circuit’s fashionably industrial temporary ‘unlikely space’. Its proportions are simply too tight for the customary ‘long view’, a convention imposed to appreciate displayed work in the prescribed tradition with which we are encouraged to look at Art; from afar and with due reverence. At Apartment art is almost uncomfortably close; we cannot escape it or the cosy ephemera that disturbs and confronts our contemplation.

Preview night in a flat in a council estate inevitably has the more of the air of a party than an exhibition opening, and once over the threshold and given the welcoming offer of a drink and some nibbles, a first time visitor can be unsure quite how to respond either to the occasion or the surroundings. Typically hung all over the flat with nowhere out of bounds, work nestles alongside the everyday clutter of the occupant’s ordinary life.

In the present show there is a subliminal journey discernable around the flat, revealing differing aspects of the public and personal life of a drag queen, as well as a glimpse into the impenetrable world of artist and muse and the impact of the complex relationships and unlikely bonds forged by such formal beginnings. An innocuous series of small paintings in the bedroom makes for a disquieting encounter upon scrutiny of the pieces themselves, exploring the vulnerability of what normally takes place in other people’s boudoirs. Viewing Irmer’s depictions of Horst’s dishabille within the claustrophobic confines of someone's bedroom sanctuary is like peering illicitly through a neighbour’s curtains or peeking through the chink in a door-jamb, whilst also scrutinising the mystique surrounding the relationship between artist and model and exposing the underlying voyeurism implicit in viewing the often intense and provocative results. Horst is a truly larger than life figure and here, naked or semi dressed, squashed into the unfeasibly minuscule proportions of both his canvas and this bedroom setting, one is literally thrust into an almost improper proximity with his physicality and his world.

Again, upon entering the tiny bathroom we are faced with an even more acute impropriety and voyeurism – a clandestine delve into the sexual arena of the Berlin drag scene, the couplings depicted reminiscent of the prose of Jean Genet, the hidden realm of the infamous bath house, and the vicarious thrill of sex with a stranger in a public or night-club toilet.

Back in the living room – the more familiar, sanctioned territory of the house guest – the artwork and surroundings are on a larger yet less unsettling scale; a huge canvas greets the visitor upon entering the room, whilst across from the sofa by the window hangs another, portraying and delighting in the public face of the fabulous creation and transformation of Horst from man to superstar, the darling of his scene and circle. Suddenly it’s difficult to separate artist from subject; is it Irmer or Horst himself? In truth we are witnessing twin creations, twin artistry, his and hers.

Here is the key to Irmer’s processes and intent, disrupting long held assumptions about painting. Figurative painting is formal and elitist in the popular imagination, yet remains the most familiar and re-assuring. The materiality, visibility and almost muscular physicality of its mark-making, the brush-strokes and daubs of pigment on canvas, evokes a sense of permanence, of trace, that we have responded to sensually and emotionally from the earliest depictions on the walls of the Lascaux caves to the languid intensity of Lucian Freud. It is also perhaps a conventionally male preserve, with a history of passive, emotionally neglected and uncomfortably posed female models behind the canvas. This veiled storyline does not go uncommented in Irmer’s work, a quiet, startling subversion and contestation of such a tradition.

Within Bachelard’s analysis of the domestic, intimate space ‘a house that has been experienced is not an inert box; inhabited space transcends geometric space.’ This in a nutshell is the difference between experiencing art in Apartment’s homely intimacy, and viewing art via the sanitised white cube of the gallery or otherwise prescribed art space. If the white cube is a space set aside from the quotidian for the secluded contemplation of the artwork, then the house is its antidote, a container firmly of the world and its everyday concerns, a personal portal to metaphors of the imagination. For Bachelard a home is a ‘nest for dreaming, a shelter for imagining’; Apartment, at once a home and a gallery, is a response to and exploration of this notion, a location and idea where the relaxed familiarity of the home is a constantly illuminating space in which to challenge the increasingly stagnant and stifled dialogue between art, audience and curation, where the personal can reveal the immensities and wonders of the world outside.

Horst is perhaps the most disconcertingly appropriate and challenging show in the history of Apartment, where the meticulous nature of Irmer’s work and collaborative processes feeds perfectly off the setting and location of Apartment’s tangible domesticity, disrupting assumptions about voyeurism and exhibitionism, exposing ambiguities about the personal and private, the public and the intimate, and affording a peek into the secret lives of the artist, model, gallerist and curator.