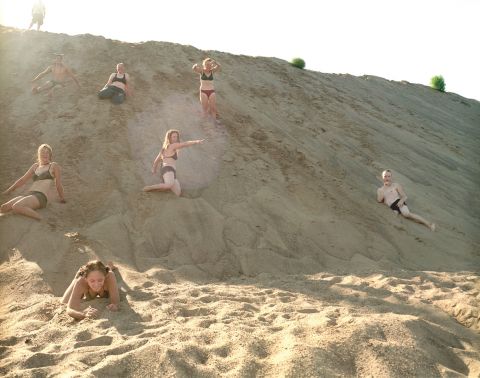 North-east of the train station Margate’s seafront offers no surprises: amusement arcades; boarded up shops; aromas of seaweed and frying fish; cries and whistles of seaguls. Above the golden sand, gaps in the town’s facade betray a rising tide of dereliction. Yet Turner Contemporary, with its clean lines and edifices mimetic of chalk cliffs, shines bright and intact across the sand. Its current exhibition, Nothing in the World But Youth, is a carnival of over two-hundred works by ninety-four artists.

Bearing in mind that Turner Contemporary is less than one year old, having youth as the central theme of its second show is organic as well as considered and site-specific. Integrating artistic showcase and local community, Nothing in the World But Youth grew out of Turner Contemporary’s intergenerational project Time of Our Lives, germinating years before the gallery was opened. Local schoolchildren have been trained as exhibition guides for the show, and specially commissioned Julian Germain portrait Hartsdown Technology College Margate, Kent, UK. Year 8, Drama. sits alongside work by local students, David Hockney, George Shaw, Andy Warhol, Francesca Woodman, Martin Boyce, J.M.W. Turner and a whole host of others.

Nothing in the World But Youth presents a polyphonic medley of forms, matched by a diversity of thematics, all crowded behind the umbrella title concept. The four galleries are so brimmed with work that a visitor can constantly discover new pieces, even if they’ve been there for hours already. Each gallery reverberates with sound from the video works, and every inch of the space is covered with objects (I saw someone narrowly avoid bumping into S Mark Gubb’s Remember Tomorrow, a single school desk with Iron Maiden’s Piece of Mind album-cover hand-etched into its wooden surface).

Central to the show, music (and its wider cultural affect) is a constant presence. The noisy projection room for Phil Collins’ international candid-karaoke piece dunia tak akan mendengar has sound-dampening foam lining the entrance corridor. A visit to Mark Lecky’s video piece Fiorucci Made Me Hardcore reveals a bricolage of popular and underground dance through trans-cultural and trans-historical archive footage. Beats emerge from a stack of speakers in the corner of the projection room where, at times, bass literally shakes the partitioned walls. Another space echoes with an emotive Ennio Morricone score, sounding out from Salla Tykkä’s beautiful film Lasso. This high level of constant ambient sound really affects the way the whole show is perceived, increasing a sense of entertainment and engagement whilst simultaneously denying the chance to spend quiet time with quiet work.

The show’s quieter pieces include some surprising treatments of hooded jumpers and tracksuits, such as David Haines’ large pencil drawings. Surreal and disturbing, these works are unobtrusively littered with the badges of global corporations, and boldly peopled by mysterious and threatening men in environments of urban squalor and despondency. The drawings have titles like Liquid Myth with Nike Air, and Nike Air Sneakers vs Colonel Sanders. Their symbolism is elusive and their impact immediate. Marc Quinn’s A Moment of Clarity is a life-size sculpture of a young man in a hooded top gazing meditatively at a skull that he cradles in both hands, inspired by Francisco de Zurbaran’s St Francis of Assisi in his Tomb. Crouch down and peer up at his hidden face – the visual presence is such that he cannot be passed unnoticed.

Hidden behind piece after piece of richly varied work, the gallery walls are a veiled frame (like the desk underneath the hypertrophied layers of oil paint on Glenn Brown’s Teen Age Riot). Yet it could be asked whether the gallery is a frame for the show, or is the show a frame for the gallery. The answer is both of course, though in January 2012 Nothing in the World But Youth will be taken down to make way for what will hopefully be a long and distinguished program of exhibitions. Pre-empting this, the exhibiting of J.M.W. Turner’s Crossing the Brook points towards the crossing of the threshold between childhood and adulthood. This foretells the moment when Turner Contemporary itself crosses this threshold. Yet J.M.W. Turner’s thirteen other works in this show are from a career still in its infancy, filled with promise, and are a treat to behold. It was also a treat to see many more people walking round this accessible and intelligent show than along Margate’s promenade (despite the sun). This high footfall mirrors Turner Contemporary’s youthful and earned optimism, its qualitative affect and its promise. 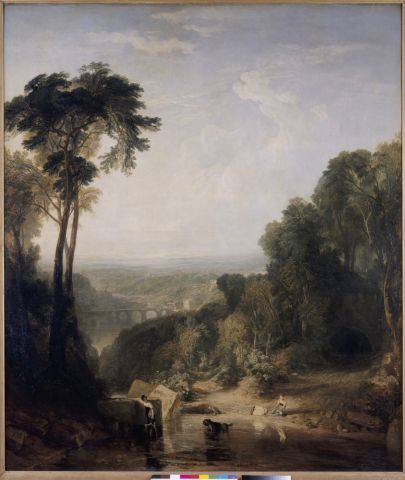