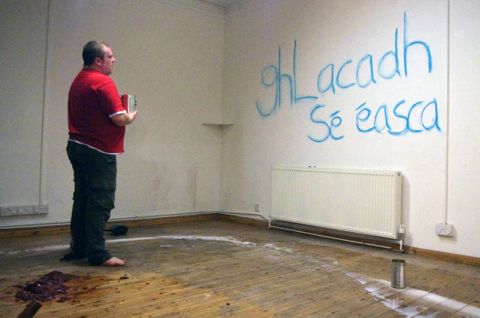 Complications dictate a difficult route across the Pennines from Liverpool to York. As I arrive at Lime Street Station, the rain has caused a short circuiting of overcode that attempts to inscribe a giant screen opposite the station concourse. Scrambled pixels and chunks of data are fractured; a spectacular glitch that mocks attempts to express a capitalist axiomatic to a flow of commuters that enter and exit the city. Inevitably, encounters with a variety of language machines necessitate my journey east, where the printing of invoices, receipts and tickets establish algorithms that track my geopolitical progress. Nonetheless, I feel like I’m escaping the effects of surveillance and totalization as the train disappears into a network of dark tunnels and towards a temporary shelter that is OUI Performance, where the work of several artists will constitute an experimental literature that attempts to negate paradigms of production and consumption.

Angela Bartram and Mary O’Neil initiate proceedings in Space 109. Positioned opposite each other they constitute a kind of mirror that refracts and reflects simultaneous modes of inscription and notation. As one figure grinds pigment and uses her breath to disperse the powder over sheets of blank paper, the other writes and notates her observations on the floor with chalk. The actions describe methods of addition and subtraction, where both materials are dispersed through acts of pressing, indenting and the re-distribution of matter. The rhythms of writing and breathing circulate a near silence in the space of the gallery, where the squeaking and tapping of chalk accompanies the tearing of tape as text and powder accumulate and measure duration. Inevitably the work ends as spatial restriction dictates an ultimate distance between the two bodies, though their illustration of writing as an act of re-appearance and disappearance, relative to thought and action, provides a gentle and compelling introduction to the Action Art Now event.

Maurice Blok offers a more tense and sculptural approach to performance action work. Shifting through a permutation of objects, Blok explores tension and intention through actions of balancing, pressure, standing and sitting. Water, soil, beer bottles and wood are materials that are acted on in a series of short interventions that defy expectation and anticipate notions of chance and accidental procedure. Jackets are plunged in water and left to drip, potatoes dropped from precarious positions where planks of wood barely sustain attempts at body balance. Aimed at a glass, the vegetables drop around a receptacle until the task is complete. The head is rested in soil and bottles are smashed together in violent actions that position the body as material to be worked upon. A series of chain events are initiated – flames burn string that is positioned in triangular formations within the performance space. Blok’s body becomes an activator of objects, an animation which leads to an experience of futility and surprise.

Eva Barto uses a microphone to separate the audience into artists and spectators. As the artists stand outside in the rain she asks them to observe the audience inside and shifts a referential frame where they become performers. A smoke bomb is detonated in the space, filling the gallery with smoke as a series of ‘battle ship’ locations are announced by an audience member. Perhaps the most conceptual work of the evening, Barto cleverly inverts audience/performer relations through minimal interaction. As she attempts to clear the room of smoke with the aid of a vacuum cleaner I am reminded of the lines that delineate and blur the relationships between readership and authorship, performers and audience.

‘Glacach sé éasca’ is scribed in blue marker on a wall. Hugh O’Donnell, wearing a football boot, blesses the space with salt, before tying cord around his torso and attaching himself to a chair. As he reads an instruction manual his bare feet pound raw liver. O’Donnell undoes the cord and leaves the space. He returns with a large petrol lawnmower which he pushes into observers. Petrol belches into the gallery as spectators cover their ears in attempt to diminish the roar of a mechanical engine. In defiance, O’Donnell continues to circulate the space, occasionally stopping to adjust his protective goggles. O’Donnell’s performances are an ongoing concern; objects come and go as he explores ideas of sexuality, confusion, genealogy and expectation. A GAA trophy pinned to the front of the lawnmower leaves a clue to broken familial expectation while he continues to ‘cut the grass’.

This writing is redundant. This writing is a tentative and speculative attempt to assess performance from an askew angle, sometimes lacking knowledge of art-making contexts, methodologies and histories that may significantly inform a series of immediate actions and interventions. Talking to the participating artists post-performance, in a pub across the road, reveals a form of communication that appears significant to the ontological polemic that performance and action art presents. Even there, the spoken words of the artists are chosen carefully, weary of misinterpretation and ‘saying the wrong thing’. They may be anxious to ascertain how their performance was received or dismissive of any kind of documentary device and already looking forward to the next work. Performance, after all, may come from a need to ‘do’ rather than ‘discuss’ and reflect on.

While Rebecca Schneider asserts the notion of ‘body to body’ transmission as a kind of inter -generational communication formulated in defiance to ideas of western archival process and historiographic methodologies, I consider ‘body to body’ dialogue as an immediate interruption of media-specific production. This non-spectacular glitch, where the unexpected and surprising elements of live performance offer alternative and antagonising outcomes, describes a temporary escape from hegemonic and increasingly cybernetic control systems. For this reason I applaud the work and ethos of O U I Performance while deliberately resisting the urge to delete this subordinate text, avoiding its subsequent consumption in a delirium of mechanised information structures.

O U I Performance, as a platform within a structure of not-for-profit networks, provides an extensive programme of exciting performance events over the next year. Victoria Gray and Nathan Walker have carefully selected artists who consciously choose to work outside of institutional and commercial restraints of the art-world and therefore subscribe to the purity of action art and live performance where your active presence is essential.

I hope to see you there. 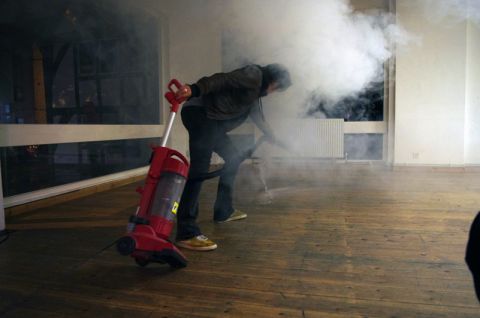