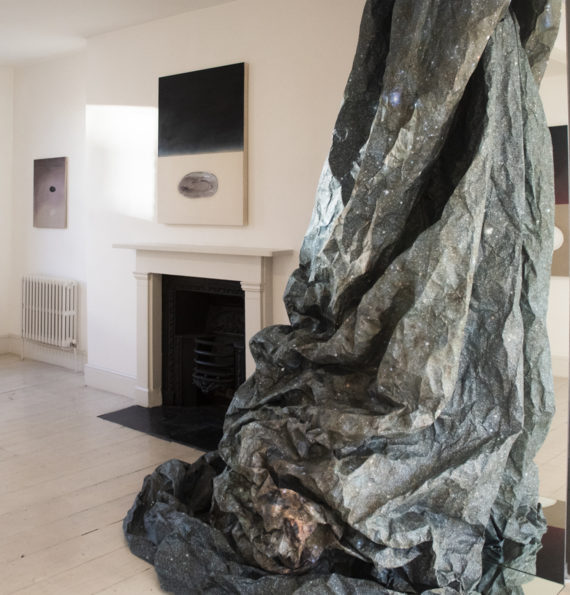 Apparently simple, content and composition within a limited range of colour and variety of surface qualities seduce the eye to hover, it’s first sight suspended in delighted thrall to first impressions as a feeling of  mutual recognition crosses the room.

But as immediacy falls away, tastes apparently confirmed and satisfied, there remains an enigmatic after-taste,  an uncanny intimation of the romantic sublime of the exhibition’s theme, a sense that all might not be as it appears ’on the surface’; of a spider in the cream.

The resonant drum-tautness of Hannah Luxton’s linen supports engages elbow-sharp edges to tolerate no equivocation  from shapes obsessively placed ‘in your face’ as it were, on an uncompromisingly vertical central axis and with a sense of Magrittean surreal. 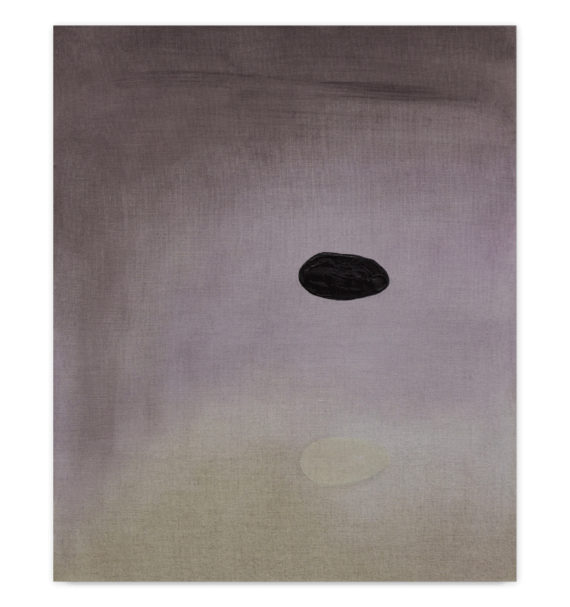 In ’The colour of my soul is iron grey, and sad bats wheel about the steeple of my dreams’, a heavy magenta puddle-like-stone-like object defies gravity, hovering, floating, suspended, status uncertain, ambivalent, agent and  victim, trapped in a relationship with indeterminate space and hard boundaries above a yearning colourless echo of itself.

Elsewhere, cloud-like brushings of soot-coloured paint hover above a flicked blue and white gesture. ‘A Storm is Coming, You Should Stay Home’ titles and tints the work with unease. 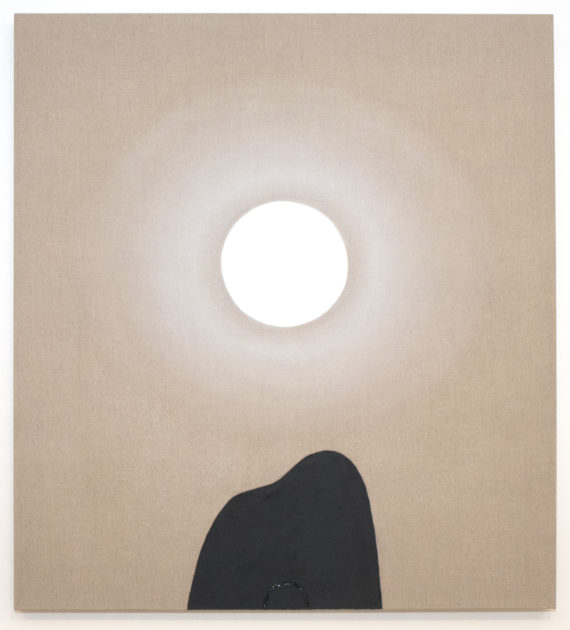 In ‘Numina II’ a mountain-shape bears family resemblance  to Ansel Adams’ photographic sublime in his ‘Moon and Half Dome’ whose sharpness of focus and solidity of composition resonates over time in the painting’s insistent canvas edge and composition. But in a move in which the painting relinquishes pictorial status, ‘Numina II’ conversely eschews natural detail.  A nascent sublime gives substance to brooding shape. 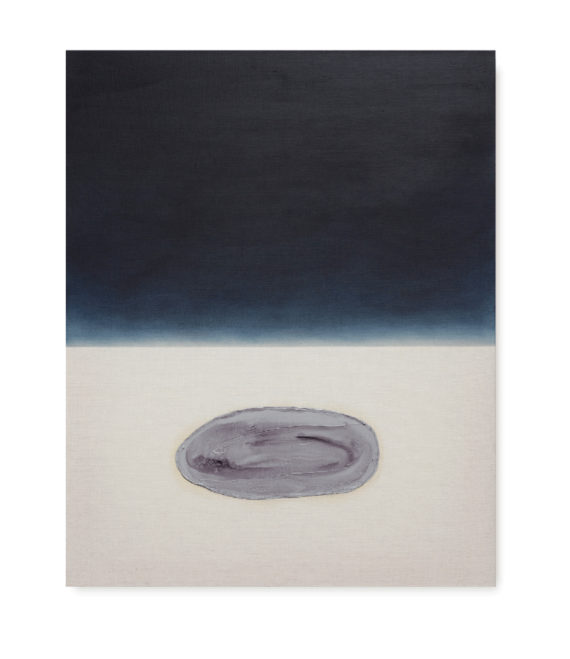 Glossy puddle-like shapes cling butter-like  to the surface of ‘The Puddle and the Plateau II’ and ‘The Puddle and the Plateau III’ Magenta stained fluid exudes from greyness to settle around palette-knife marks. A dark part-shape with blue aura thrusts up from the bottom of ‘Moon Mountain’. ‘Star Stream’ shows  what it says, gently showering into sight from somewhere just outside the canvas? Raw linen of varying weights gives texture to silent resonance.

There are no limits to ways of making a painting, nor any to ways in which a painting may be described, other than those of the imagination. So how does the puddle get to be where it is? How does the horizon get to be where it is? How do relationships get to be how they are? The works balance delicately, in a sense between ways in which they might be described. Are the happenings in these paintings matters of choice, consequent upon decisions or matters of disposition, of things and their maker?

Julie F Hill’s ‘Through Machine and Darkness’ https://juliehill.wistia.com/medias/xvn5d3tyt is an outcome of an algorithmic learning process using one of a class of algorithms with the lovely name of ’Deep Convolutional Generative Adversarial Networks’.  A continuous image of change in black and white rises and falls, ebbs and flows on the screen. Trained upon 45000 scanned images from the Hubble telescope, whilst its material origin is those  images, they are not directly  reproduced but are  the basis for photorealistic images generated by a process of ‘algorithmic imagination’. As image they are no longer images ‘of’ a primary source , but secondary images ‘from’, arising in a process designed to generate artefacts that will be accepted by a discriminating Artificial Intelligence as original.

This algorithmic medium with no measure of the ethical, no awareness of falsity or the fake, which cannot deceive itself, but nevertheless is said to generate ‘fake’ artefacts, resonates in a world in which, where WE come ‘into the picture’ so to speak, deceit is routinely crafted into ‘fake news’ and  what might be the case is denigrated as partisan and itself accused of falsity. And the concepts of falsity and the fake in an algorithmic world  themselves become problematic, crumbling things, adding incrementally to contemporary insecurity and intensifying  a desire for clarity.

Notions of space and the universe, grid – like patterns , pixel-patches, spots, patch-lines of white light, varying degrees of surprise, anticipation and puzzlement, hints of Agnes Martin and Hannah Luxton’s linen textures in the next room come to mind. Shades of the Turin Shroud, supposed product of early photographic forgery also flicker in the memory as image unfolds before the eye. Look closely and RGB pixels are visible around the white light; is awe possible in a Godless world? 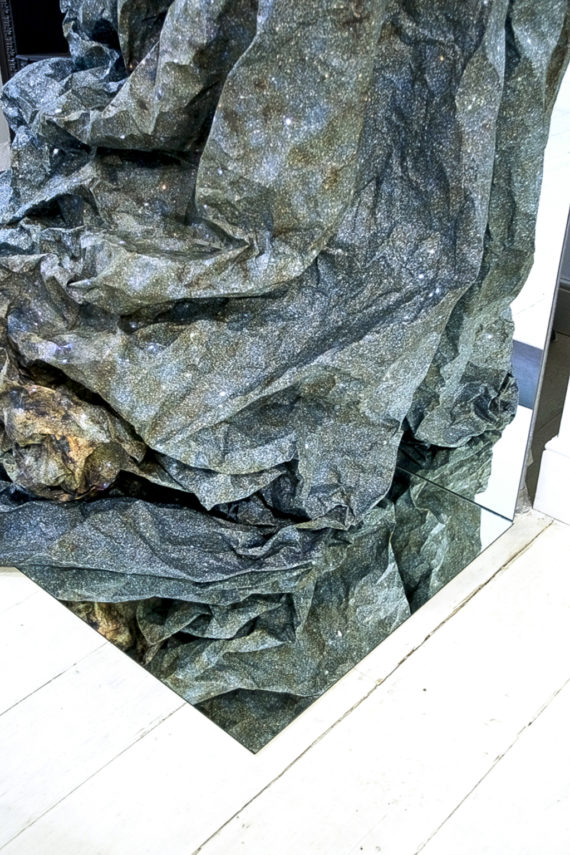 In a spatial  inversion ‘Dark River’s stars shine from within.  Rock like in its appearance and angular tumbling journey, image and object are at odds with each other, image forced to face impossibly back to the camera by the act of turning and joining the print in upon itself, its apparent rockiness itself illusory. 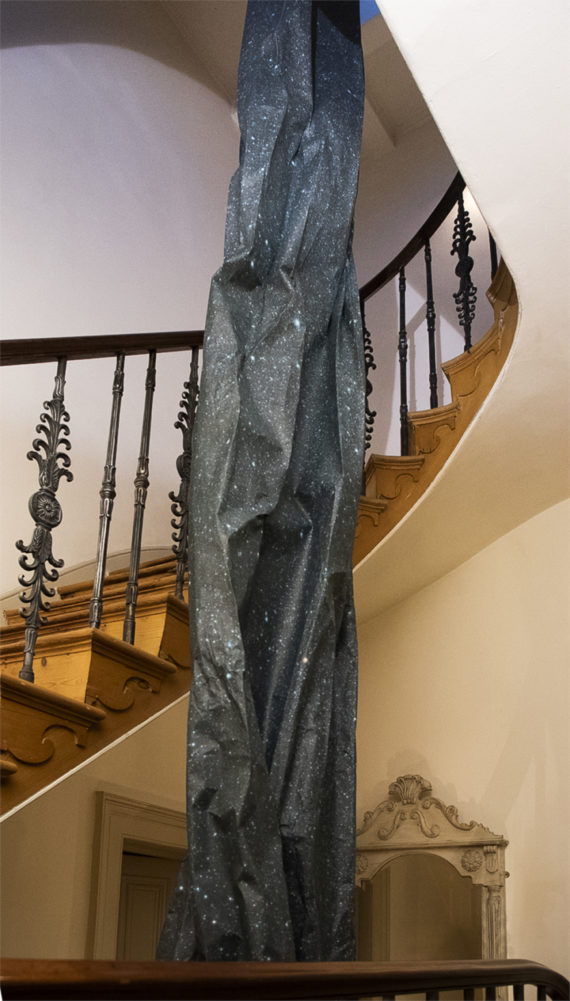 ‘Dark River  II’ partakes of  a Yosemite-like tumbling from rooflight to ground floor through stairwell space, in turns rock-like, paper-like, crumpling to the floor, journeying past banisters, treads, risers and spindles which testify to the passing of beings ineffably humbler than the Milky Way yet indissolubly of it, initially and ultimately of the same stardust. Such is the sublime.