One Thing Against Another - a-n The Artists Information Company 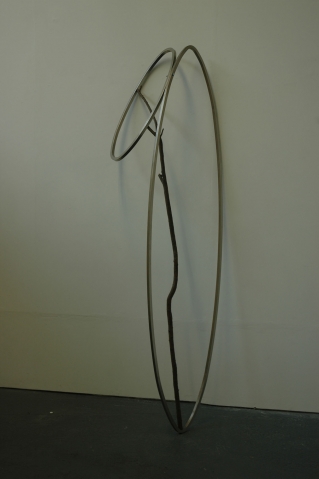 This week I went along to see an interesting show organized by Portsmouth’s Aspex Gallery. The show, One thing against another, included work by five artist, Alice Walton, Eduardo Padilha, Sam Basu, James Ireland and David Kefford, who were invited to respond to and make work for a number of public sites including the Norrish Central Library, Victoria Park Aviary and the Natural History Museum butterfly house as well as the gallery space itself.

Mixing an interest in site specificity with the rawness of a cardboard and glue aesthetic much of the work seems concerned with the relationship between language and materials.

While it is difficult to talk about the language of materials without veering off into associations thrown up by the total image of a work what is interesting about this show as a whole is the tension drawn between the idea of inside and outside space, both physical and metaphorical. Alice Walton’s constructed room within the gallery space for example, takes an oblique look at the archive in its various forms: as a room for stacking and ordering books, as place for containing specialized knowledge, as cardboard container for holding documents and as photograph for capturing memories and images of the persona. All of this is ingeniously turned inside out, questioning what it is that actually structures such mnemonic systems.

Eduardo Padilha’s Soft Sculptures also explore the idea of the archive but this time in a more soporific way. Embroidering newspaper headlines such as ‘postcards from the edge of rediscovery’, ‘collect and survive’ and ‘abstinence conundrum’ onto reclaimed mattresses and sleeping bags previously used by the homeless, he has set up a lounge area within the public library for home sick souls to come in from the cold it seems. Working more like slogans, his embroideries offer the viewer clues to the mechanisms of psycho-social dependencies and alienation, perhaps from knowledge that is apparently available to everyone.

Sam Basu’s work takes a more humorous stance on the arbitrariness of language. Mixing sci-fi and hippy culture aesthetics in his My hippy love commune, his large octagonal plastic light machines floating incongruously inside the guinea pig cage at the Victoria Park Aviary comment on the apparent contradictory exclusions of language. Like machines from outer space they could have come straight out the Hitchhiker’s Guide to the Galaxy. His geometric forms are also like codes for the ‘space’ in language suggesting Wittgenstein’s argument that geometry is a metaphysical construct or picture that obscures the true grammar of language.

For me, James Ireland’s Practical Significance and Common Goal also brought the idea of how we use language into focus. His beautiful elliptical forms precariously balancing branches within them had a more universal perspective however, while, I think, Sam Basu’s work speaks more directly about the place they are situated. His Field Dynamics I, for example, while also being quite abstract is like a giant cat’s cradle spanning the two architectural pillars in the gallery. Mapping the space with string brought to my mind all sorts of vague notions about string theory and symmetry but also highlighted the tension between abstraction and materiality.

David Kefford’s work on the other hand, I think, takes a more rounded look at how dynamic language is when in full use. It’s metaphorical, self-reflective and literal possibilities become apparent in his clever use of materials which somehow manage to speak for themselves. A sock dips its toe in a narcissistic pool of black plastic in Self-reflection; a hockey stick and Le Cross stick merge to speak about the game of language in Entrap; and the viewer is warned off delving too deep into the structure of language in Penetration. His Entice was also a real treat taking the viewer outside of the gallery to the Butterfly house where his suspended feeding frames made out of lamp shade frames, colourful scouring pads used to feed the butterflies sugar water clearly speak about metaphors of light and growth.

I loved also Eduardo Padilha’s use of plastic crates to make his ghostly white stencils which merge so imperceptibly into the gallery wall that I almost missed them and his colour net skylights in the Norrish library. Both pieces very subtly using the language of painting while integrating and reflecting their situation which, in a way, sums up for me how the show works as a whole so successfully. 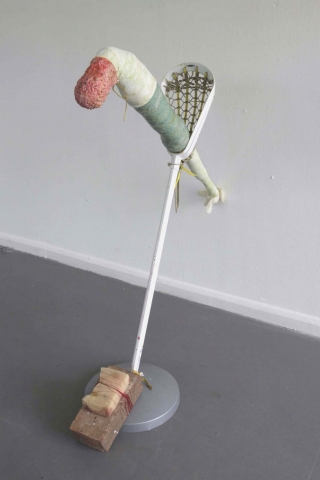