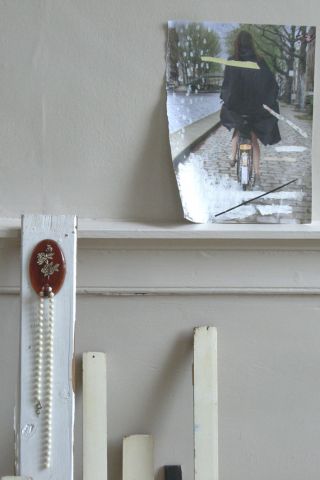 The works in this exhibition are manifest from simple means and although presented within an elegant domestic interior they are far from grandiose – but they are powerful. Val Norris’ drawings and sculptures have a lithe sexuality. They are, in essence, two and three-dimensional collages bringing together recognisable and non recognisable concrete and pictorial elements. In ‘Lead Sister’ 2009, is composed of a plaque iterating the title, a sculptural assemblage and a headscarf square pinned to the wall. One of the sculptural elements poses in the middle of the floor with a model-legged Bambi stance. It appears to be an inexplicable form of furniture, some sort of wood upright and banding slung between but with something surely missing or adapted because it does not make sense as a functional object. In ‘Digging the Nature Scene’ (2009) several small planks of worn wood are lent up against the wall next to a page pulled out of a magazine showing a figure cycling alongside a pretty canal. The fashionably dressed woman pictured seems to be gaily ‘living – out’ a feature article. One plank is embellished with a faux-amber plaque which usefully has a tiny hook on which to hang a single set of beads – costume jewellery for the utilitarian and distressed wood planks. Norris’ ’untitled (modern drawings)’ (2009) are mixed media collages which all have photographic elements. Three of the drawings have images of women, two are reproductions of sculptures showing fin de siècle girls dancing or standing, the other is a heavy fringed Bardot alike, glancing out of the frame with big kohl rimmed eyes. The drawings are framed by a sooty, scratchy border of black ink and embellished by hand drawn patterns mirroring the delicate and geometric designs on a Faberge egg pictured in the fourth drawing. The images are contrasted with other shimmering and matt textures, applied in layers tying in with the title of the show. Norris often erases or obliterates components of her drawings letting the cover-up becoming a strong visual feature of the next incarnation rather than being lost to the viewer as a discrete corrective act.

Maggie Mowbray’s work ‘Untitled’ (2009) appears as a delicate seam or frill in the floor in one of the main rooms. The careful pairing of porcelain and paper makes for an illusion as the two materials appear to be the same but one holds its form upright and the other is barely heavy enough to stay flush to the floor. Her other two dimensional and layered works, with spidery drawings, provide calm punctuation around the flat. The imagery, form and text included in Mowbray’s pieces seem to have architectural references ‘See this dividing wall’ and ‘(Room with) 2 clamps’, both 2009. Mowbray plays with scale in all of her works but it is in the small flat wall based works where the absence of any reference points lead to ambiguity and an allusion to large architectural spaces.

Sandy Hutton exhibits a suite of collages, ‘Come With Me or Die Alone’, 2009. In each the face and head of a figure is obscured by the hands and forearms of disembodied limbs. The figures’ real hands are also replaced with mismatched appendages. Even before reading the title, these images provoke a creeping bodily sensation through the inferred sensation of suffocation, blinding and dumbing by another person’s hands on ones face. The masking gestures which Hutton overlays are in direct contrast to the conventional portrait format of the base images where, by definition, the subject is clearly presented to the audience.

The installed drawings of Drew Wright draw close attention and include dense biro patterns on small pieces of paper. The works seem compulsive and repetitive but their arrangement with the architectural elements of the space gives them further context, presenting them as compositional elements within much larger scenes. Often the installations are made up from many scraps of paper, which balance precariously between casual and controlled in their shape, positioning and embellishment. This montage-of-elements technique is carried through into Wright’s contribution to the publication which accompanies the show. Two pieces ‘Taussig 1’ and Taussig 2’ (both 2009) combine torn paper excerpts of text (‘even the dogs are crying’) and sections of varying patterns. They are cited as ‘mixed media scanner remix’ in the index, a way of working which reflects both the installation process and Wright’s musical practice as ‘Wounded Knee’. In the publication Wight also shows a drawing which perhaps gives insight into his processes. The piece ‘I went into a room…’ centres on a few lines of handwritten script. The detailed patterns evident in his other work appear here to be growing off the letter shapes, illustrating how these pieces have grown from one point, one mark, one phrase, into a more complex pattern. The sinuous lines within this piece give it a lively, almost romantic fluidity which is different to some of the uniformity prevalent in his other drawings.

The show leads you through several rooms and corridors, at once formal with traditional domestic wall furniture but also fantastical because of its unusual layout and curved walls. In one small space, hugging the back of a much larger room, echoing the shape but with a behind scenes feel, ‘Cranny’ (2009) by Maggie Mowbray is presented on the floor. It is a layered, silken ripple along the curved skirting board, where the materiality is the subject and it gives the appearance that it’s flow outwards could be curtailed and crumbled to dust at the slightest draft. This reminds the viewer that this is not a permanent exhibition, not even a permanent gallery but, as the gallery hand out says, a space momentarily ‘overwritten by the actions of the artists and the audience’.