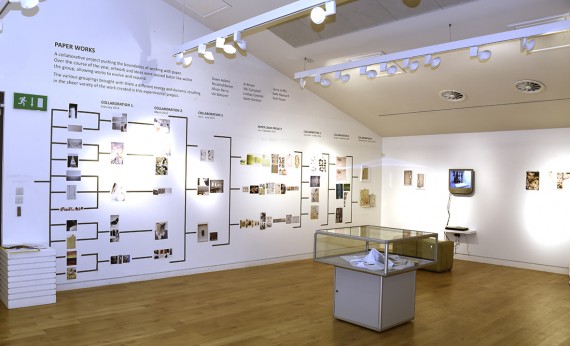 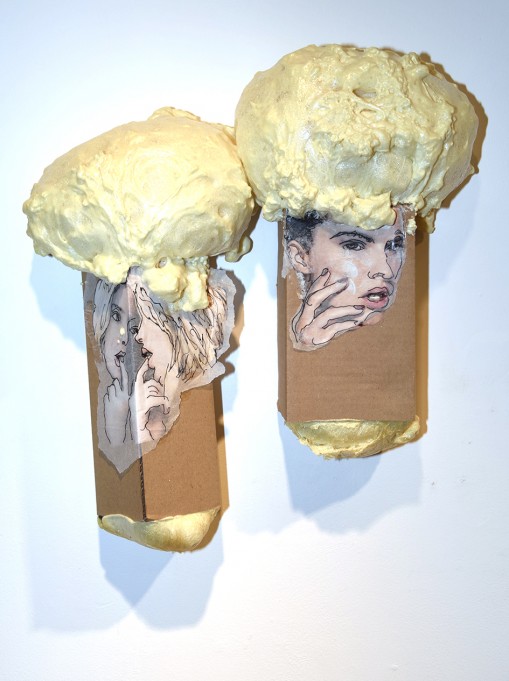 Having collaborated together on a number of experimental projects since graduating in 2008, we joined forces again in 2012 to present an exhibition titled ‘Works on Paper’. The project challenged us to work within the constraints of the traditional medium of paper to extend pre-occupations in our individual practices. It enabled us to push against the boundaries and explore the formal and informal implications inherent in the creation of work on, with and from paper, creating an exciting exhibition ranging from contemporary drawing, printmaking, sculpture and installation. We would like to develop this further, inviting other artists to engage in this visual debate. Through collaboration, we would like to investigate, explore and challenge what a ‘Work on Paper’ can be and ask questions such as, who has ownership of the work? Can a work ever be ‘finished’? How much ‘work’ must be done before a ‘work on paper’ is an artwork?’ ‘ (https://campbellconnors.wordpress.com)

Kind of a collage of a show, this collection of related things evolved out of material and interpersonal relationships – thinking with materials, reflecting through conversation, melding material and conversation into one process. All seems to have gone well. Nothing suggests that any collaborations resulted in agreement to differ, no splashes of objection or compositional standoffs. How much of collaboration is compromise? The participants are named in a gallery heading. No further mention is made on the walls, of who did what in this eclectic mix of things, techniques, ideas, presentations. That nobody is pointed to with a ‘She did this,’ or ‘They did that’, that no egos are labelled, is provocative. (In keeping with this, there is no individual credit attached to photographed works accompanying this piece.) Pieces evolved in their passing from artist to artist, group to group. Groupings changed. A perspex box contains small sheets of Silver-birch bark on which can be read words, sentences, some partially obscured, others visible. Everything that the viewer has not read, every thought that we have not had could be here in this box; conceptually its dimensions vary with the insights brought to bear upon it.. Across the gallery, a hard cover torn from a book has in turn had its own blue covering torn down, leaving just a small part in place. Its brown cardboard inner and blue torn covering sit slightly forlorn together, a winged figure-field piece, its torn irregularity draws the wall surface into itself. 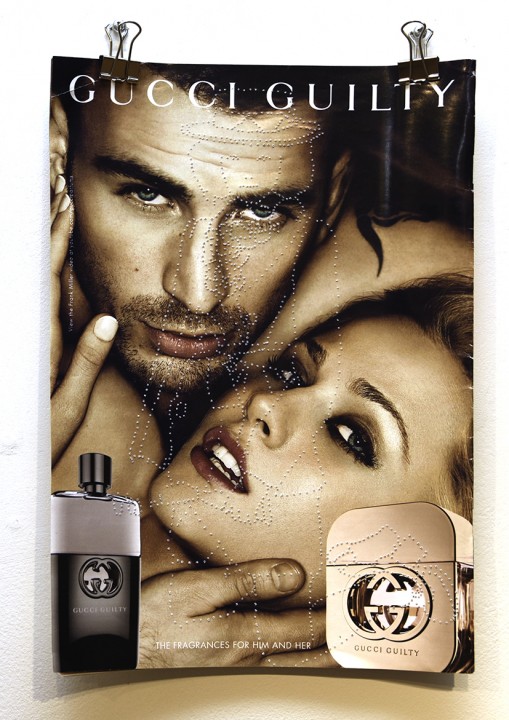 A cardboard tray frames something puzzling. A small block consists of folded brown paper, maybe from a newspaper, its folds machine-stitched together, a plastic bag, string-tied like the secrets of a child. A safety pin inserted in the top of the tray is not closed. Hope perhaps? A video confuses the eye momentarily. What looks like the sharp end of a pair of dressmakers’ shears has apparently been forced nine times through a sheet of heavy paper, tearing a series of holes in a roughly circular pattern. Slowed down and projected in reverse, the shears are malevolently sensual. A Beak-like smirk accompanies their sliding exit as they reverse their stabbing, gently concealing their crime . A series of smaller holes are in turn revealed, are and repaired by the screwdriver that caused them. One thing leads from another? In the corner of the gallery a playful ‘Drawing Machine’ lightens the mood, Heath-Robinsonesque. Nearby a deadpan video offers instructions as to the use of the machine, reassuring the would-be artist of its ease of use and the exhibition-ready quality of its product. ‘Drawing has never been so easy.’ asserts a female voice, ‘In as little as 15 minutes you can be rolling off your ready-to-show drawings……’ Great lumps of wood, the hammers of a piano, a small child’s trike, assorted levers, pigment, rolls of paper, steps from a set of bunk-beds, an upturned bicycle, various other bits and pieces conspire with the help of four technicians to produce automated drawing for the amateur artist. An open Sunday Times Magazine piece offers an article about Miley Cyrus. Next to that, the heading on an advertisement announces ’GUCCI GUILTY’ A couple entwined look out at me. ‘Come in’ ‘Watch us’, enticing with, ‘You could be Guilty too’. Through both pieces, pinhole drawings are pricked from the back. One of ‘Miley’s’ drawings is of a couple holding hands, maybe ‘ordinary’ people pricking a presence into her rarefied world, one in which it is possible to ‘…collect sushi in a 2014 Maserati.’ They stand as though on a cliff looking out to sea. Two pinhole cyclists do wheelies on the adjacent page. And pricked through ‘GUCCI GUILTY’, a female figure, short skirt, frilly blouse, fitted jacket, also looks at me, kneeling as she is looked through by Gucci’s fragrant couple. She holds what could be a paintbrush; part of her right hand is missing. Is the use here of the SundayTimes newspaper and elsewhere of the Telegraph a choice? Choices are revealing. 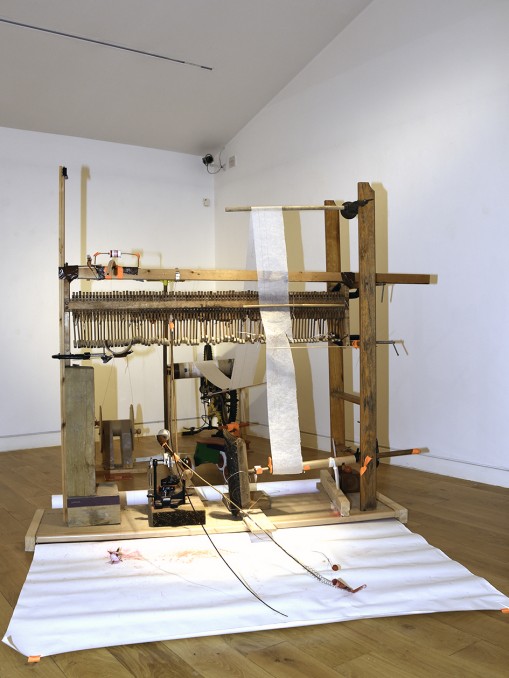 An Artbook is gouged and scratched. Its pages rendered relatively unreadable, they offer clues to those in the know and those who want to find out…. Mined for new forms, it is presented in a horizontal case, a reliquary for Art’s remains. Elsewhere, newspaper text has been painted out with white (primer?) which is in turn worked with large graphite smudges. Portrait photographs rise from their submerged texts. The piece is displayed as though caught by the wind and left as it fell, like newspapers do in alleyways. 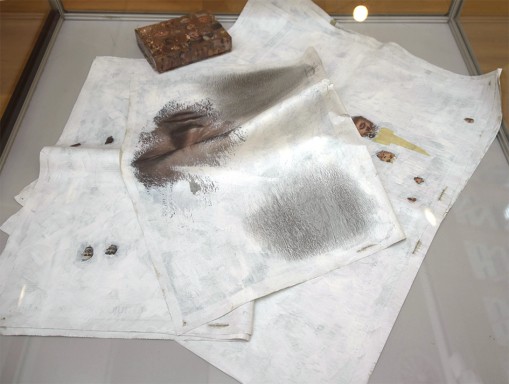 A work composed of Red parallel lines responds subversively to the notion of ‘Straight’ by coming to a wriggling conclusion. Smokers are drawn on cigarette papers. A small object made from tape, hair grips, wire, twigs leans against an upturned takeaway coffee cup looking for all the world as though is at home; there is enjoyment in the ordinariness of uncomplicated stuff contrasting somewhat with more developed ideas. Much of it is documented through Campbell-Connors blog which remains accessible on a-n. Subsequent reference to the documentation left at the side of the gallery revealed things that I had missed in the works, and things that I could not immediately have known.The artists describe their progress, concerns about ownership, egos, power, letting go, trusting. The form that they follow is presented as an equation where, (RB) x work (NC) x {artist(LC) + t artist(VB)} = x, initials referring to artists and x being the resultant work. Documented influences include literature, music, poetry, artists (well Klee at least, taking his line for a walk.’) Baudelaire, Kester, St Paul, Juhani Pallasmaa, and of course each other; the spirit of DADA visits. Whether or not a work can ever be finished is secondary here to the way in which the course is run. Art generates its own criteria. Are questions of ownership an issue? The cliche about work being completed, (or equally, left open) by the viewer comes to mind. There is nothing that was ever made in the world to which an unnamed hand was not turned at one or another point in its life, and in the end it’s all just passing by,like the large crumpled white sheet of paper lying on the galley floor, a bed for the future. Credit the ‘Un-named.’