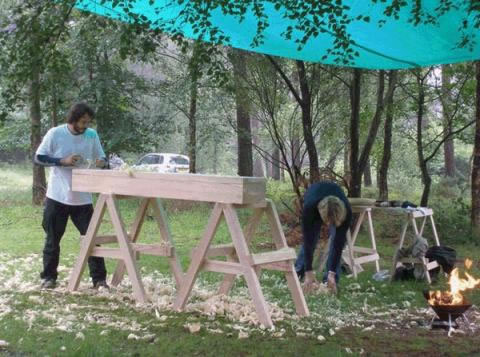 Venue
Centre for Contemporary Art and the Natural World
Location

Haldon is a working forest: a scene of constant death and renewal as timber is felled and trees replanted. In the midst of it all, Peter J Evans looks like a man preparing his own coffin. Using only hand tools, he's planing a large block of lime wood set upon two trestles, removing the wood sliver by sliver. Others are gathering up these curled shavings and adding them to a small fire, reducing them further to smoke and ash.

He set out to reduce a lump of wood the size of his own body to nothing in just two days, but it's lunchtime on the second day and he seems to have removed less than half. He moves methodically, planing from one end and then the other, readjusting the heavy block on its support as it shifts. So much sweat and effort, so little impression made.

It's soothing to watch someone working so slowly and calmly, especially in these peaceful, misty surroundings. But I'm also thinking about aching shoulders, blistered hands – and for what? He's not making, he's destroying. This is craftsmanship divorced from craft; artistic obsessiveness turning on itself.

Peter J Evans has worked with trees before. He's been photographed perched in one, his clothes bejewelled with tiny lights. And, back in the city, he's just had a show at Spacex that included works made from wooden parquet flooring. They seemed to set our synthetic modern lifestyle – our fragile constructions of wood and metal and stone – against the awe-inspiring turmoil of the natural world.

Now he's out in the forest again, demonstrating his own insignificance. As he worries away at this piece of sawn timber, reducing it to dust, he's telling us about the passage of time, the processes of decay. But all around him, still-living trees are taking up moisture and nutrients, renewing complexity, fighting against entropy. This isn't a performance that communicates intensity or ego – more detachment and futility. Death is inevitable, and if it's one man against the forest, the forest will win.

Peter J Evans' show Feedbacker tours to Seventeen in London in autumn 2007 and Workplace Gallery, Gateshead in 2008, where further performances are planned.