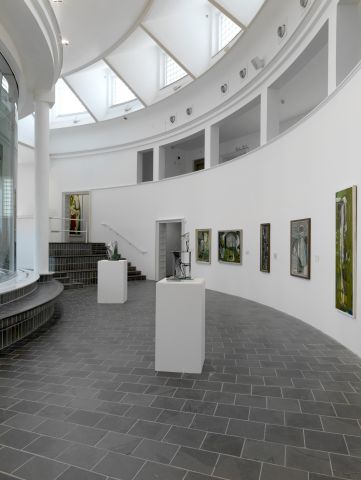 St Ives is a safeguard for a significant portion of the Tate Gallery’s vast collection of twentieth century British Art, specifically the work of the ‘St Ives Artists’, including Peter Lanyon, Ben Nicholson, Barbara Hepworth and Bryan Winter. Significantly, Peter Lanyon is the only member of this group who actually hailed from St Ives, and his retrospective exhibition aims to demonstrate this not only through biography of the artist’s life and works, but also through its curation in the beautiful setting of the Tate St Ives Gallery.

Structured chronologically, the exhibition takes us through Peter Lanyon’s career stage by stage. He is presented as an artist ‘discovered’ by his more mature and experienced peers Adrian Stokes and Ben Nicholson. In terms of formal modernist values they were an immense influence on his development at a very early stage in his career. Two wall-mounted constructed works White Track and Box Construction No 1 (1939-40) demonstrate how he followed their teachings to the letter, and ardently explored the potential application of Nicholson’s ‘plastic values’. Later on Naum Gabo also added a vocabulary of ‘poetic space’ to Lanyon’s growing visual language. It becomes evident through the course of this exhibition that in Lanyon’s eyes everything held value, regardless of externally perceived hierarchies. This sensibility is visible in the range of both physical and conceptual material input into his work: from using found boards as painting surfaces, and found materials for the constructions he made alongside the paintings, to all the found information about art, life, pictorial space and psychology that he digested with vigour and energy throughout his career.

Place names dominate the titles of his paintings, particularly of places in West Cornwall, pointing to an instinctive sense of place underpinning all the work. In Porthleven (1951) colours seem to be derived from actual substances relating to the landscape he is depicting: the lichen covered rocks, black coastal boulders, seaweed, marine light, sun-bleached sand, mud-encrusted harbour wall. Lanyon searched for a way to paint not just what he saw but his experience as well, somewhere between the parameters of pure abstraction and of traditional linear perspective. He strived to depict the human history inherent in the coast line, considering it impossible to see the surface without at the same time seeing what lies underneath. In this way the present appears inseparable from the past. Historical conscience about local disasters such as the 1919 mine collapse at Levant (near St Just) becomes an analogy for society rebuilding itself after two world wars – not just a physical rebuilding, but also of collective psyche and cultural responsibility.

At this point in his career he was regularly making constructions alongside the paintings, presented here on plinths as finished works in their own right. It is key to understanding his constructed/sculptural work that he became quite hands on during the war as a flight mechanic for the RAF. He salvaged materials in a cycle of planes destroyed and rebuilt, as well as along the way feeding odds and ends into his own sculptures to continue his personal dialogue of formal space, materials from the land, and a serendipitous sense of renewal. In fact each event in his life appears to be recycled into his practice, nothing left to go to waste. He was conscious of the psychological effect on his practice of marriage, children, travel, new inspirations from foreign lands, the weight of the rocky coastal landscape of West Cornwall, and the primal urgent vital life of the Italian town he came to love – Anticoli Corrado, just east of Rome.

The exhibition’s curation into ‘periods’ – early, mature, gliding, late – is apt because Lanyon did seem to operate in distinct cycles in his career. He was always retreating back to St Ives to consolidate and reassert the abiding concerns of his native Cornish landscape, history and life. The success which he began to achieve in the 1950s and early 1960s was exponential. He was receiving wide critical acclaim and met many of the important names in American abstract painting including Robert Motherwell, Helen Frankenthaler, Mark Rothko and Clement Greenberg, not only in New York, but here in St Ives. Patrick Heron was also an ardent supporter, along with continued support from the Arts Council and the Gimpel Fils gallery in London. Shortly before his untimely death in 1964, he had travelled as far as Slovakia, Texas and Mexico to make/exhibit work as well as to give lectures, always returning home with fresh inspiration and a sense of renewal.

This pattern of going away and returning seems also to apply to Lanyon’s passion for taking to the skies. The gliding began in 1959 and also enabled him constantly to seek out something new. His formal concerns of surface planes, multiple perspective and relationship between figure and landscape were all experienced keenly during these thrilling flights through the small window of the light craft. As the view soars past beneath the clouds, so the paint stretches and fogs in Lost Mine (1959) and Thermal (1960). The veils of colour, ranging between pale ultramarine and greeny cerulean, whispily pull away the layers to reveal avenues of movement beneath against a stony off-white ground. Gliding gave him a new experience of space through which he developed a primal internal language of scale – of his human scale against the land. For Lanyon this was inextricably tied up with creating sublime and transcendant space in the paintings. These enormous sensations which he sought, of nature’s aggressive force, has become the stuff of myths, not dissimilar to stories of Turner being strapped to the mast of a boat during a violent storm, so that he could know what it was really like out there.

There has been criticism of the Tate’s decision to hold this major retrospective of Peter Lanyon’s work in St Ives rather than in London. However I would argue that without artists such as Peter Lanyon the Tate would not have lent so much of its collection to St Ives for a major gallery celebrating the town’s lasting legacy in the history of British Art. Lanyon stayed true to his roots during his life, so I personally felt the importance of his work in relation to the place it was made merited the journey down to the furthest reaches of Cornwall, in the same way that countless artists and critics visited his studio there in his lifetime.

If you have missed the exhibition, the show’s curator Chris Stephens (head of displays and curator of Modern British Art at Tate Britain), has also written an excellent book Peter Lanyon At the Edge of Landscape which encompasses 12 years of research.