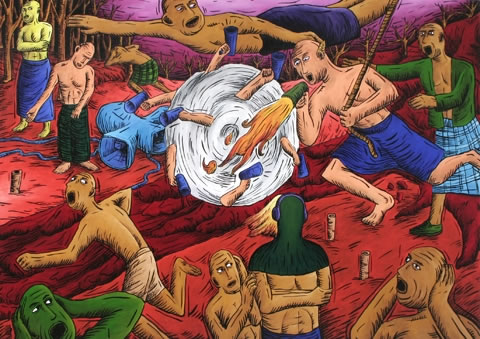 The becak1 generated a quiet rhythm through the midday heat, weaving across streets as cars and motorbikes swerved left and right. This was the city of Yogyakarta in southern central Java, with a cultural history dating back to the ancient Javanese Mataram empire, and I was on my way to visit Cemeti Art House, a contemporary artist led gallery committed to supporting diverse art practice in Indonesia, and showcasing the work of both Indonesian and International contemporary artists. Cemeti Art House was first set up in 1988, the initiative of two Indonesian artists, Nindityo Adipurnomo and Mella Jaarsma, who converted their front living room into an alternative art space. It was a concerted move to provide a public platform for art practices that challenged the prevalent market for ‘decorative’ painting in Indonesia at that time, and encourage the development of a critical art discourse. In supporting installation, performance, experimental work and happenings, and nurturing critical perspectives, CAH was one of the first exhibition spaces to form a resistance to both the commercial galleries that dominated the ‘art world’ and the oppressive conditions for artists under General Suharto’s centralised and military dominated ‘New Order’ political administration. Under Suharto, publicly sanctioned art celebrated the ruling elite or was, like many of the country’s assets, simply another commodity up for sale.

General Suharto’s 32 year dictatorship ended in 1998, but its legacy is significant to an understanding of the work of Indonesian artist, Popok Tri Wahyudi, and his exhibition, Lost Message, which opened at Cemeti Art House in September.2 Popok was born in Mojokerto, East Java, and studied at the Indonesia Institute of Art in Yogyakarta during the 1990s. Toward the end of the Suharto era, he joined Apotik Komik, a group of artists engaged in political and social comment using the graphic media of comics, murals and posters. Comics created by Apotik Komik infiltrated public space with provocative, often subversive messages and stories, as posters or murals on city walls. Indonesia has now made the transition to a new political era, but, for this artist, comics are still an effective means of continuing a personal dialogue about social conditions and the complex interface between the individual and society. For Popok, art is a vehicle to express “my personal opinion about the environment in which I live, think and walk with the freedom that surrounds me.”

While the target of his opinions is primarily life in Indonesia, Popok has also explored his concerns in cultural contexts beyond South East Asia. Since the late 1990s, his work has been exhibited in Japan, Australia, the Netherlands, Singapore and Germany. The artist spent a period of time in Santa Monica, California, as artist in residence at the 18th Street Art Complex with the UNESCO programme in 2001. In 2007, he was invited to participate in a six month artist residency at the Akademie Schloss Solitude in Stuttgart. This particular experience of negotiating linguistic and cultural difference tested his ideas about social communication, and it was comics that provided an alternative mode for pursuing dialogue in an unfamiliar oral and written culture.

The artist’s subsequent return to Java prompted a renewed confrontation with the urban culture and environment of Yogyakarta where he became acutely aware of the clamour of ‘empty messages’ issuing from advertisements, radios, mobile phones, newspapers and announcements plastered on electricity poles, sidewalks, mosques, churches and public toilets.

The exhibition, Lost Message, represented a reflection on the artist’s personal experiences of cultural negotiation, transition and change. It comprised a body of work since 2007 and included paintings, sculptural objects, puppets, drypoint and digital prints on paper and etchings.

The artist’s deft graphic approach was apparent in the large acrylic painting, Info Truder, 2008, which featured a group of figures in a barren, forbidding landscape. It was a scene marked by violence and discord, as the figures, with facial expressions of distress, either fled or attempted to defend themselves against assault by a central individual who bore down on them whilst unleashing a verbal torrent through a megaphone. Megaphones were also depicted in other areas of the image as triffid-like, intrusive objects, seemingly an autonomous form of life. The influence of comics was evident with objects, figures and background ‘drawn’ in black outline, while three dimensional forms and a sense of movement was suggested through repetitive hatching. Heightened, rather than naturalistic, colour was used across the entire picture space to emphasise emotional intensity. In fact, the extreme, frenzied psychological state portrayed had parallels with Edvard Munch’s painting, The Scream. This was information assault at its worst.

In a further series of four large mural sized canvases, the artist explored stories of human communication across different cultures and eras. Dari Naturi Binatang, 2008, portrayed the heritage of oral culture in Indonesia, while Ketika Telegram Pertama Kali Dikirim, 2008, referred to the invention of the telegraph line in America. The oratory tradition of the Roman era was depicted in Orasi Yang Tumbuh Dan Berkembang, 2008, and Dunia Yang Dilipat, 2008, addressed global communication via the information technology of today. Here, as well, the direct visual language of comics, typified by humour, satire, social observation and commentary was omnipresent. However, the artist’s comic style was characterised by a spare use of written dialogue (often non-existent) and a preference for multiple scenes of action within the same picture space. This contrasts with the convention of western comics where blow by blow action is encapsulated in a sequence of separate frames. In Orasi Yang Tumbuh Dan Berkembang, the narrative space is non-linear, collapsing past, present and future, and the dynamic interaction between fields of action and scales of time introduces imaginative layers of meaning for the viewer/audience. The moralising, even educational, tone of Popok’s comic works also suggests a more tenacious connection to the oral traditions of Javanese culture, in particular that of ‘wayang’ or Indonesian puppet theatre, than to the comics of American pop culture, although there is an influence. The Indonesian critic, Enin Supriyanto, has articulated that “comic in pop literature and art tradition is definitely a ‘pictured story’, wayang beber is a ‘telling picture’.3 In ‘wayang beber’, pictures painted on a continuous length of leather, bark, paper or cloth are revealed through unfurling the work from one supporting pole to another. Simultaneously, a narrative is conveyed through speech and song performed by a storyteller and traditional Javanese gamelan or musical ensemble. Nevertheless, the crossover and parallels with other world traditions of comics and performed narrative imbue these works with limitless possibilities for intervention and comprehension beyond the Indonesian context.

Incisive social comment was evident in a display of 12 puppets, each a three dimensional figure dressed in modern garb. Accompanying each puppet was a printed description of two personality profiles. One was the description of a real person, known personally to the artist, and the second referred to a fictitious character, alluding to the projected personas people sometimes use in social interaction. This was an interesting variation on the theme of communication, although the static tableau quality of the work, with adjacent plaques containing the descriptions, was less engaging than the dynamic and expressive canvases. Intent on reading the plaques, the puppets almost became peripheral to the viewer. While alluding to animated characters, they remained mannequin-like representations. I found myself imagining how the emphasis on character might have made a greater impression had their silhouettes or shadows been projected onto the wall, or been elements of a performance.

Other works in the exhibition demonstrated a greater preoccupation with emotional states, suggesting a specific concern for the individual. The sculptural piece, Bicaralah Yang Jelas, 2008, consisted of a plant pot containing an artificial plant or tree. The pinnacle of the plant featured a large yellow flower in the shape of a megaphone. This surreal piece could be interpreted as a humorous comment on the pervasive communication media, which in Indonesia, as elsewhere, infiltrates and dominates public and private space. However, it is also suggestive of repercussions on the individual’s state of mind when the consequences of sensorial bombardment can be phobia. Specifically, isolation or alienation was indicated in the pencil drawing, Terpotong, 2007 (which translates as ‘cut off’). Two heads with eyes closed, or averted, were separated by a blank speech ‘balloon’ dissected by two dotted lines. A pair of scissors floated below suggesting the severing of communication between the two individuals.

In contrast to the public dialogic nature of comic works by Apotik Komik, this exhibition presented the viewer with a journey into the artist’s subconscious, as much as into the collective social space of human interaction. Lost Message probed deep into experiences of communication, as well as disharmony, misunderstanding, even conflict, but characterised by humour, energy and empathy, it ultimately left the viewer with a sense of a wake up call, rather than a vision of futility. Prior to 1998, communication in Indonesian society was inhibited by the machinations of a military dictatorship. Today challenges revolve around a democratic nation that embraces thousands of islands, complex ethnic and religious diversity and 300 local languages. Activating avenues of dialogic engagement across cultural and social difference, not to impose a distorted vision of unity, but invoke the fullest participation by all in public discourse, links the concerns of this exhibition with the wider social environment in Indonesia today.