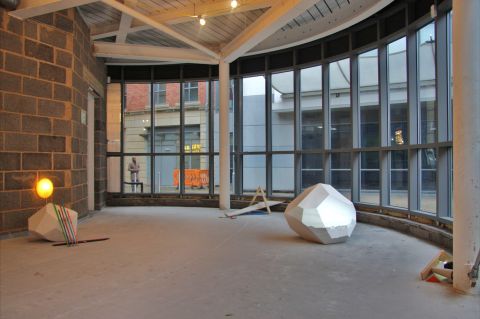 The bare, underdeveloped site that is soon-to-be White Collar Zoo was stripped of any domestic refinements: no flooring, no integral lighting, and no plaster on the walls or ceiling. Heavy-duty work lights dangled, somehow majestically, from metal ceiling supports, as if virile fairies were lighting the room. Industrialised metal cylinders outlined the large windows that inescapably framed the viewers of PRE-FAB to the outside world. I was constantly reminded of the limbo-like position I was consumed in, an in-between state of neither-nor. I did not know what the space was previously, nor did I know what it was going to look like after completion. It was as if the sculptures, too, were situated within a no-man’s-land, a space caught between two identities and yet not having a permanent one of its own. This temporal blurring of identities, I believe, was reflected in and around the artworks themselves.

The sculptures evoked ambiguous beginnings and ends, to the point that I could not distinguish between two artists’ work as they overlapped space. Even within one artist’s work, it was unclear without the aid of the floor plan where one sculpture started and the next began. The abstruse arrangement of the sculptures reinforced the ambiguity of the sculptures themselves. Oliver Tirre’s Untitled 2011 and Untitled (eyes) 2012, are sustained in a direct dialogue; the till-rolled ‘eyes’ are positioned about the red-striped box filled with further red-striped till receipts, as if the ‘eyes’ are eternally watching, (perhaps guarding?). I cannot imagine these two pieces of work standing alone. The motif of material and colour, I believe, is only prominent when these two pieces interact with one another. Although exceptionally ambiguous already, I feel that if these two pieces of work were clearly presented individually, they would be extremely hard to read or interpret.

Undetermined beginnings and endings, notions that separate pieces of work are in conversation and staggered repetition all characterise the sculpture show, PRE-FAB. The question of where does sculpture begin and where does it end is present within contemporary art but, I believe, has never been explored to the extent of which PRE-FAB has. I enjoyed not knowing who’s work was whose, or where the parameters of a work ended; every piece interacted and conversed with another. Why should art be restricted to its own personal and private space? In a group show especially, this seems absurd. I applaud Rebecca Ounstead’s courage in making the decision to heighten and reflect the indistinct and vague nature of the sculptures within the curation of PRE-FAB.