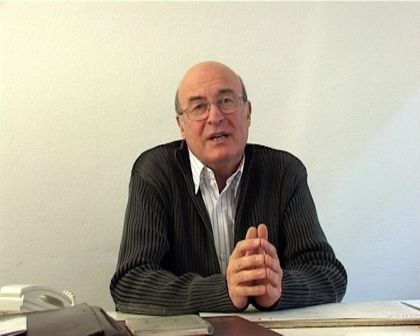 On Entering Manuel Saiz's latest exhibition at the Castlefield gallery in Manchester, I headed straight to the front desk to grab a floor plan. This is a nervous habit of mine, I need the floor plan almost immediately as soon as walk into a gallery. I will purposefully avert my eyes away from the work before having carefully examined the location and titles; a good example of the fairly irrational and obsessive behaviour I display in my everyday life. And so in my rather disturbed and disorientated state (moments before I had almost met a sticky end when a car rammed into the pavement just metres behind me) I became increasing anxious due to not being able to locate one of the works that was presented on the floor plan. This was particularly angst inducing because I like to view work in the order it is numbered and this was the first work.

It is peculiar that I possess such a habit, but I am pretty certain it comes from a fear of not understanding. Because of this anxiety, it was with much trepidation that I approached the women at the desk and asked her to point me in the direction of the first piece of work, Pride. She directed me to a small gold plaque at the entrance of the gallery which read Manuel Saiz proudly supports the Castlefield gallery. I felt that somehow this small plaque betrayed some kind of underlying simplicity about the way in which the viewer approaches the gallery; the viewer sometimes acting as an unwitting spectator to another's underlying conceit and at other times indulging in their own personal conceits regarding their level of intellectual understanding.

I personally (like many the art goer) have on a number of occasions been guilty of such conceits, and the whole bizarre build up to viewing this work reminded me of my own rather repugnant tendencies to obsess over how I negotiate my way around a gallery space. However I also was struck by a kind of hypocrisy inherent in this piece; Saiz is making a rather audacious comment about the economic territory that he operates in. I began to wonder whether this was quite deliberate; perhaps commenting on the many complex relationships that occur in the art world.

As I began to cautiously move around the exhibition space I became increasingly aware of this comment on the slippery relationships and negotiations between the artist and the viewer, always moving in and between each other in a complicated game of cat and mouse. The second piece Points of view seemed to highlight the playful arbitration between the two. The work consisted of two monitors that faced in opposite directions. The first monitor displayed a video of Saiz talking about his work; a fairly mundane and indulgent confrontation with the viewer. However as I approached the second monitor I became aware that I had been tricked. On this monitor was a series of interviews with several well known international artists; each were discussing their own practice. Saiz's interview on the other monitor was a re-enactment of these interviews. The final twist was that only the monitor showing Saiz had the volume turned up, giving the second monitor an uncanny relationship with the first, the international artists were speaking with Saiz's voice. It was this act of revelation that I believe was designed to disorientate the viewer, the act of walking around the monitors a physical manifestation of this process.

On viewing the third work Specialist technicians required: being Luis Porcar I became aware of another interesting relationship; that of the artist and the technician. This was a video piece that used headphones to create an intimate engagement with the work, perhaps also emphasising the connection between voice and image which was displayed in Points of view. It features a Spanish Dubbing actor who regularly dubs the voice of John Malkovich. As he describes his work, the audience gradually comes to the revelation that he in turn is being dubbed in English by John Malkovich. A shift occurs in the viewers understanding forcing upon them a kind of self consciousness and self awareness. The artist and the two actors become transposable, lending the work an impossible sense of falling in on itself.

The next two works seemed to again comment on the unique exchanges that take place within the art world. What is Art Flowchart utilises the conventions of binary logic, lending the work an air of authority. It consisted of a pile of posters that the viewer could take away. I was delighted as I am a keen recipient of freebies of any kind. This notion of the gift again seemed to emphasize the contradictory and ambiguous relationship between artist and viewer. The flowchart invites the viewer to choose their definition of art but only through a strict series of rules that guide the viewer to a series of already laid out conclusions. Social Sculptures (everybody is an artist) which features 3 actors repeatedly uttering Joseph Beuys famous words "everybody is an artist" (with different emphasis depending on the mood in which it is delivered) seems to further exaggerate this interplay between artist and viewer. At once proclaiming that everyone can be an artist while also offering a never-ending, cyclical interpretation of this phrase that eventually leads to the alienation of the viewer.

The final work The Two Teams Team engaged with many of the issues surrounding the other works and therefore made it a suitable conclusion to the show. It consisted of a film maker and a video artist discussing the merits and disadvantages of the medium while taking a break on a film set. The work is set out in such a way that you are watching it on a large screen but are listening to it on headphones; the echoing of "everybody is an artist" resonating in your ears. This lends it a confounding quality; a confusing mixture of the textures of film and video art. In the work they discuss budgetary issues as well as the self-awareness that occurs in the viewer when confronted by an artwork. The video artist calls this a "suspension of a suspension of disbelief" and implies that there is always a deal made that is implicit in the relationship between artist and viewer. The artist is to be distrusted but this is the bargain that the viewer makes; through this process they open themselves up to the suggestion of another kind of reality. One that is not fixed and insipid but perplexing and beautiful. 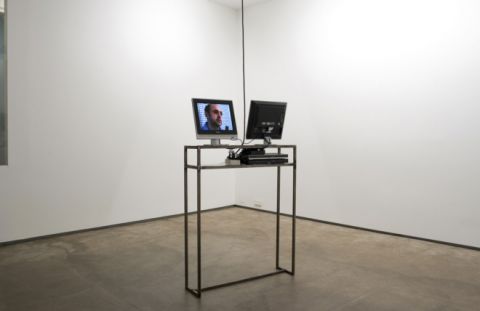