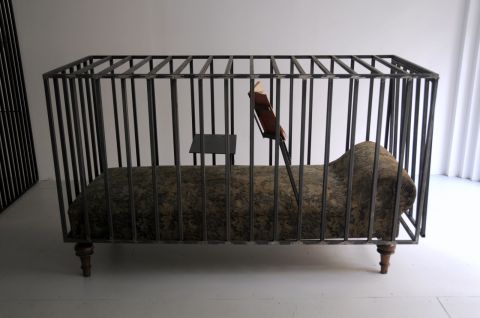 The artist Louise Bourgeois once described Quarantania, a group of elongated bronze sculptures, as “growing from the duel between the isolated individual and the shared awareness of the group”. Alas, Quarantania also happens to be the name of the biblical mountain, North-West of Jericho, where Jesus was tempted by the Devil. Thus this exhibition thrives in this ambivalence; the works exist between isolation and the temptation of belonging; the desire for individualisation against the allure of inclusion and acceptance.

The ritualistic actions and video performances of Dagestani artist Taus Makhacheva transform personal issues of ethnicity, body politics and identity into problems of representation. In the four works presented here, the artist places herself in uncommon and often ridiculous situations. From covering her face in intricate henna patterns, to disguising herself and her belongings, her positioning could be dismissed as humorous and even light-hearted. Humour however, can be a powerful tool for critical reflection and within her work it is successfully used to question the process of assimilation, integration and discrimination.

Nowhere is this more evident than in her video work Rekhen (meaning “flock” in Avar language). In a loose reminder of Gilles Deleuze’s Alphabet (A is for Animal), the artist has camouflaged herself behind a sheepskin rug, and is trying to approach and interact with the flock like an animal. In a desperate attempt to blend in, the zoomorphic figure persists determinedly with the self-imposed task, even when she is doomed to fail.

The appropriately named The Fast and the Furious is a liminal work that sits between ethnographic research and advertising material. The video follows the trajectory of a 4 x 4 covered entirely in fur as it is taken for a ride down streets known for road racing. There is an air of malaise amongst the male participants of the sport, who jokingly ridicule the absurd and capricious vehicle. I was enthused over how cleverly she evidences the fictitious nature of the symbols with which we choose to represent our identity. Makhacheva pinpoints accurately the contrivances with which we are represented, in our quest for acceptance.

Following similar concerns, Eva Kotátková’s work renders visible the futility and artificiality of the control mechanisms we are subsumed under everyday. She transforms everyday banal objects, such as chairs, a bed, or a pile of books into torture-like symbolic objects of discipline and control.

In a gesture of disdain to the science of ergonomics, her sculptural objects emerge to question the optimization of the wellbeing and the overall performance of humans as social beings. The heavy metal entities lie in the gallery like dormant giants, awaiting their awakening and activation by the human body. The visitor is tempted to become part of these fantastic objects and fulfil their purpose. The fact that a previous visitor has left marks on the floor beneath them makes self-restraint none the easier. There is again a humorous nod, intrinsic within their failure to become useful, eternally dependant on the human body. In this sense, they are forever indebted to Erwin Wurm’s One Minute Sculptures – comical yet thought-provoking.

Nonetheless, beneath this fantastical and comical world, there lies a serious critique of education, social behaviour and authority. Thus in Sit Straight, we watch painfully as children engage in an absurd relationship with everyday furniture: school chairs become prosthetic devices for holding a hand, or for reading books without holding them, or evidently, for sitting straight. It is in the rejection of the original object that the artist finds the space to talk about the status quo and intangible social norms and conducts we unquestioningly follow. The feeling of futility and the questioning of convention that her contraptions convey was the most surprising about her pieces.

The strength of the exhibition’s premise is slightly let down as one reaches the third and final space, dedicated to Neha Choksi. One’s initial reaction is to try to establish connections with the previous two artists, whose work follows a clear line of thought. The line however is somewhat blurred in her work. It lacks the narrative strength of the two previous artists and were it not for her videos Leaf Fall and Minds to Lose, it might feel out of place.

Leaf Fall shows the repetitive action of one day’s work, stripping a tree of every single leaf except for a spring shoot. Without explaining, or indeed questioning the worker’s actions, the video shows the slow and sad transformation of a single tree into bare branches. I was mysteriously compelled to watch this beautifully poetic metamorphosis.

Outside, a mattress lies precariously on top of a series of vases containing dead flowers. Like in the aforementioned video, her work seems more interested in the relationship of the individual with life and death, meaning and purpose, however it falls short of producing a serious reflection. A photograph depicting the tree from Leaf Fall, leafless, still, redundant, undermines the intangible beauty of the video work. There is a naivety in her work I could not fully grasp, like a gasp of air that does not quite fill the lungs. This is not to say the work is not well realised, simply that there is a potential for maturity that has not been reached.

As a whole, the exhibition is a breath of fresh air, an opportunity to reflect upon the potential of humour as a critical tool to question our place as social beings. If their future work is anything like the work on show here, then it looks promising indeed.