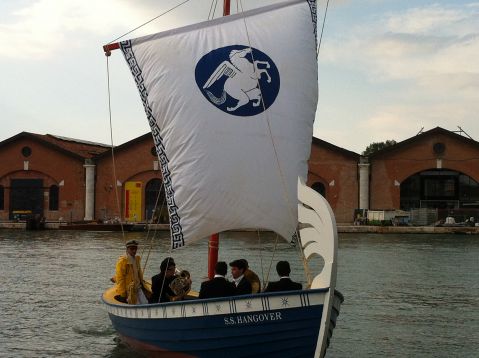 The boat sets off slowly, deliberately from a landing in the Arsenale’s historical shipyard, Gaggiandre, six musicians with brass instruments are onboard, they start to play. The sound of horns, trombone and tuba creates a stereoscopic effect as the beautiful, ethereal musical composition, floats across the still waters. The boat sails to another landing in the Arsenale, drops off a musician who is replaced by another musician, creating a continuous loop of kinetic performance, a moment of calm amidst the madness that is the Biennale.

I interviewed the artist Ragnar Kjartansson, who is a classical musician, vocalist, artist, painter, sculptor and videographer and first represented Iceland at the Venice Biennale in 2009, at 33, he was the youngest artist to ever represent Iceland. As an artist who also works across disciplines, I was intrigued and asked him what was the initial inspiration for the work, ” I was in a Greek restaurant in Reykavik, on the menu was a beautiful boat, the SS Hangover, I had been invited by Massimiliano Gioni to create a work for the Biennale & decided to build the SS Hangover, it just seemed so appropriate for the Biennale!”

“I really love music, I have always been in bands, but I think the constraints of the music industry are stifling” Ragnar ia a founding member of Trabant, an electronic-pop/rock band from Reykjavik, Iceland, known for the raw but powerful music and flamboyant live performances, “I can do so much more with music by working with sound as a form of sculpture, using sound to take you on a journey”

Past works have included Folksong in 2007. For six hours a day, Kjartansson performed over and over again a short verse from an unknown but strangely familiar song. The work lasted ten days.

As an artist whose practice also blurs the boundaries between fine art, film, music & rock culture, this small, hybrid boats sailing across the waters of the biennale represents so much more than the mere work. It marks an era of music, yes music finally landing & finding a home in the art world.

God Bless The SS Hangover & all who sail in her.