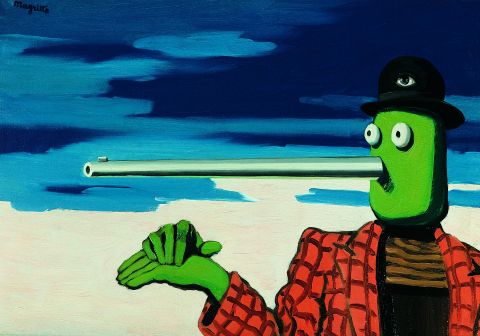 The tempestuous sky over Liverpool’s dockside offered a contrasting vista to the iconic blue skies speckled with nebulous white clouds of Belgian artist René Magritte. The early stages of the exhibition reduce Magritte’s work to its composite parts – encouraging the viewer to consider the textures, artifice and patterns that recur in his painting. These include wood, intricate lattice designs and metal; materials which appear frequently and uniformly throughout his oeuvre. Whilst this grouping initially seems prosaic, it does encourage a close examination of Magritte’s painterly technique, challenging assumptions that his images are smooth and flat, with evidence of impasto in ‘The End of Time’ (1927), in which thick layers of paint are slithered to emulate the grain of wood.

In these initial spaces, the curators, Cristoph Grunenberg and Darren Pih, ease visitors into Magritte’s symbolic universe, introducing the individual elements which comprise his visual vocabulary. We discover how Magritte’s lexicon consists of ‘bilboquet’ – a wooden toy consisting of a ball and baton, which also resembles balusters, chess men, or mannequins, in addition to the more familiar veiled figures, apples and top hats. By the end of the exhibition one is fluent, if not – due to the sheer glut of material on show, a little jaded by these surreal hieroglyphs.

This strategy is further supported by the accompanying catalogue which, rather unconventionally, takes the form of a dictionary of terms. Arranged in alphabetical order, scholars of surrealism and Belgian art have penned entries cataloguing key motifs and figures. Some may find this approach reductive, in that it deconstructs the formal properties of the work without offering insight into the artist’s motivation, politics or context of production. Yet, for me, this format is inventive in that it pays homage to the surrealists’ own dictionaries and indexes; a format which conveniently works in tandem with the show’s thematic arrangement.

An initial surprise was a small cluster of work representing Magritte’s ‘Vache’ period of the late 40s. Vache means cow, which, like ‘wild beast’, was previously appropriated by the Fauvists. Following Fauvism, work such as ‘The Ellipsis’ (1948) deviates from Magritte’s usual palette – incorporating vibrant primary pigments to garish, comic ends. Other stylistic departures litter the show, including work which takes influence from Impressionism and Pointillism.

In a small nook, two identical versions of ‘The Flavour of Tears’ (1948) are coupled, encouraging a sophisticated ‘spot-the-difference’, in which we are compelled to search for minor aberrations in light, colour and line. This, it seemed, was curatorially arranged to engender a reflection on commercialism and reproducibility as well as an appreciation of Magritte’s precise skill. Such canny pairings are encountered throughout the exhibition, most memorably, the proximity of ‘The Rape’ (1934) as it features on the cover of Breton’s ‘What is Surrealism?’ in which a woman’s breasts and crotch displace her eyes and lips, to the corresponding pursed lips of ‘Woman with Cigarette’ (1935), a design for a cigarette advertisement, which hangs, without explanation, above.

Amidst this commercial work, which includes advertising and fashion drawings, is one of the few overtly political pieces in the exhibition, ‘Le Vrai Visage de Rex’ (1937). In fact, Magritte’s political sentiments were largely absent. This seemed to be supplanted by a sense of Magritte as a joker, which came across prominently in a reel of films, or home movies, in which we confront a jovial man partial to exaggerated mime and farcical performance. The films were fascinating demonstrations of the way in which his work is interrelated, recycled, modified and appropriated. In several of the films, the paintings feature as objects or characters, whilst the film ‘Tuba (Interior)’ (1960) restages the kiss of ‘The Lovers’ (1928) – subversively replacing the heterosexual lovers in the painting with two women. There was something satisfying in joining the dots and making connections independently – the curators’ minimal intervention with text panels perhaps attempting to reflect Magritte’s own concern with the inadequacy of language.

After a journey through landscapes and more figurative work – the most interesting of which were a painting of a woman’s nude body whose frame traces the contours of her torso and ‘The Eye’ (1932-5) in which the shape of the canvas is manipulated to create a semi-sculptural ‘picture-object’, there follows an invitation to pass behind curtains, having been lured by a curious warning: ‘visitors should be aware that this room contains images that some people might find challenging’. Magritte’s illustrations to Bataille’s Madame Edwarda are erotic and lewd – a perfect visualisation of Bataille’s text. When two children tear in, closely followed by their mother who describes the material as ‘rude’ I feel exposed, as though ambushed in a sex shop. Challenging indeed.

The curators cluster Magritte’s satirical attack on French masters and his interest in the act of ‘petrifaction’ (whereby organic material is transformed into stone) together under the somewhat ambiguous title, ‘The Monumental Image’, a connection which seems a little tenuous. It was a delight, however, to subsequently apprehend a selection of postcards and personal writings, on the most part exchanged between Magritte and Marcel Marien. Marien, along with Rachel Baes and Paul Nouge, although included, are minor players in the show – it would have perhaps been beneficial to have a stronger sense of the Belgian scene in which he operated. Magritte’s involvement with the London art scene of the 30s and his relationship to English patron of surrealism, Edward James, did figure, with Magritte’s doodles documenting James’s commissions a welcome inclusion.

Loosely following a chronological trajectory from the 20s through to the 60s, the royal blue walls and delicate illumination of the final room punctuated the exhibition perfectly. Here, ‘The Sixteenth of September’ (1956) and ‘The Dominion of Light’ (1953), demonstrated Magritte’s notion of the ‘hidden visible’ and represent, for me, his most accomplished work in both style and substance. Simultaneously suspending day and night, dark and light, the radiant skies with which we began gave way to a haunting, surreal gloaming.