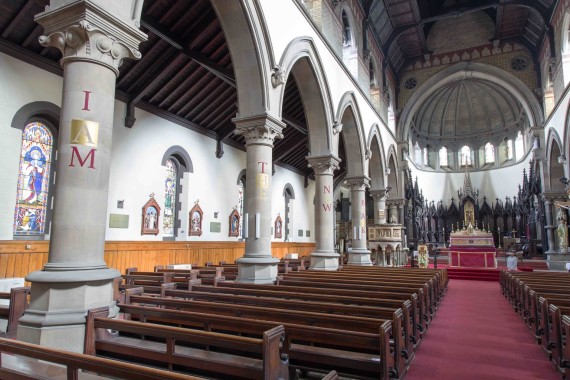 WESSIELING’s recent site specific installation entitled Holy Chic is set in an impressive Grade II listed Dominican Priory church, in Newcastle upon Tyne. The installation consists of religious and fashion symbols, which when set within this context are provocative and disquieting in their ability to appear and to disappear out of focus.

Against a backdrop of religious, ritualistic symbols, the audience is invited to draw parallels between the gloss of fashion languages, colour palettes and text framed by sculpture, pillars and engraved gold plates which reveal messages of devotion when they are brought into view. Furthermore, there is a tension that exists in the interchange of works which form part of an installation and are also situated at the interface of fashion and religion.

It seems fitting that the exhibition forms part of a wider cultural dialogue, as part of Newcastle upon Tyne’s Late Shows, which is now in its 10th year and is still drawing more and more audiences together to celebrate the arts, culture and heritage venues across Newcastle and Gateshead. The opening night alone drew up to 560 visitors to the church.

This year’s themes for the Late Shows, amongst others, is ‘weaving community’, which adds to the layers of complexities in this exhibition involving diverse communities that are situated within its parameters. In fact, the engraved quotes interspersed between the Stations of the Cross within the installation, are biblical quotes and contributions from this religious community here made up of individuals from Angola, Cameroon, Congo, Portugal, Ireland, The Philippines and locals to the region.

One of the challenges of the installation is possibly in the way the works are integrated within the space.  Upon entering the church, we are struck by the large text on towering pillars.  Whilst these are clearly visible from various aspects, the gold plates are easier to miss in such a striking and imposing setting and some of the work is situated to one side of the church to accommodate for the restrictions of working in a functioning church and all that this entails.

On closer inspection, the work reveals more insight into the ironic, playful and thought provoking juxtaposition of fashion and religion as ritual and practice, with titles such as ‘ A Heel Came Real’ appearing to emerge from the arrangements of carefully placed text and there are more titles hidden within it. The exhibition invites you to question and engage with it and rewards you with a range of views that stimulate discussion as you navigate around it.

WESSIELING is a visual artist, academic and cultural historian with an extensive portfolio that centres on fashion and the challenges of cultural property.   Her use of text and installation as a medium are a feature of her work to date which has been shown internationally.  Her current exhibition Holy Chic is distinctive in that it marks new territory for her as a visual artist working collaboratively.  The potential for the work to appear controversial given its provocative edge and its engagement with the wider community within a religious setting further adds to the dynamics at play.

The responses to the exhibition have been revelatory in themselves with WESSIELING’s own enthusiasm for the engagement clearly reciprocated in the responses received and again highlighted by the very personal comment made recently by a contributor and parishioner:

“The people who walked in Darkness….It has been the phrase that has meant most to me in times of sadness, fear and depression and in times of hope and joy.” 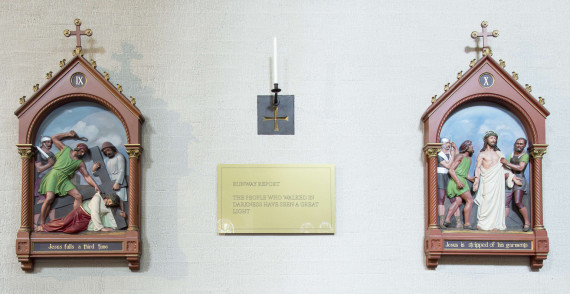 What is the value of this installation? To what extent does it translate and communicate across the diverse audiences responding and engaging with it? Given that this project involves community and also forms a part of a larger community inspired event as opposed to being in an art institution meant it was beneficial to hear more about the collaborative process as it unfolded.  I was fortunate to hear WESSIELING talk through some of this process at the opening event however it is unfortunate that some of this methodology might be lost as the exhibition continues.

WESSIELING had the following to add:

In an era when fashionability has become a way of life, doesn’t the arrival of the ‘Runway Report’ give hope and joy to many the same way as the unwavering biblical quote to the parishioners? Holding on tight is their ‘fashion bible’ as if fashion is the cure for our fear and depression, and in time of sadness. Or is it?

Finally, Father Dominic White, who has been instrumental in the realisation of the exhibition, had the following comment regarding the exhibition:

“Working with WESSIELING on her Holy Chic has both been a fulfilment of our vision at St Dominic’s and joyfully unexpected. Our aspiration as a Catholic community in the heart of the arts quarter is to welcome all who are seeking, and to bring healing to divisions and wounds in selves and society. The worlds of religion and fashion are often divided, yet both involve exploring questions of identity and lifestyle. In putting together fashion slogans and favourite Bible quotes chosen by the diverse community at St Dominic’s, we feel that with WESSIELING we’re constructing a bridge across that divide.”

One certainty is that Holy Chic, opens up a new platform for engagement and dialogue with diverse audiences who might otherwise not have met. 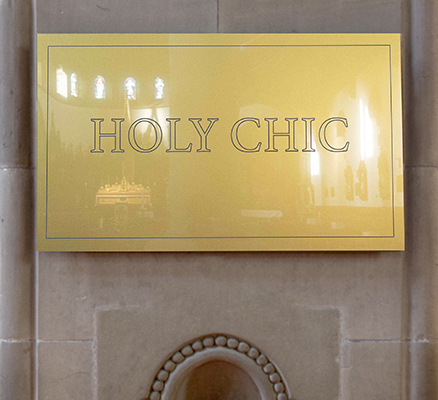 Holy Chic has been extended for a further few weeks due to public demand and will remain open at St Dominic’s Priory Catholic Church, until July 2016.

Hayley Mardon is a Zimbabwean born British artist and designer who lives in Newcastle upon Tyne where she teaches and is involved in research and social engagement projects.