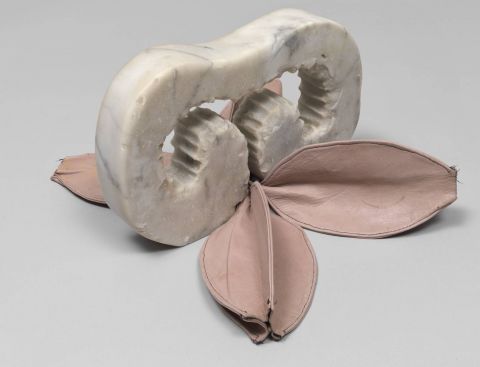 The journey begins with the It’s Orpheus When There’s Singing series of Deacon’s drawings from 1978 that were made when his wife won a scholarship to the United States. Perhaps inspired by his previous background in performance but there is a graceful, flowing quality to these circulinear drawings. The faint pencil marks are like faded scars that suggest elements of space and form receding into space and picked out by darker, more definite surgical cuts. The guide text mentions that the drawings resemble parts of the body: eyes, ears and mouths, their relationship coming from modes of perception and communication. In many ways they also resemble the futuristic concept vehicles created for the ill fated Alejandro Jodorowsky version of Dune created by illustrator Chris Foss in the 70s. Number 7 and 8 of It’s Orpheus When There’s Singing (1978) in particular resembles Foss’ concept drawings for the Sardauker Warship and Guild Merchant Ship. (http://www.duneinfo.com/unseen/chris-foss/) Reading the drawings in this way suggests feelings of motion, progression and locomotion in the sculptures on display in the subsequent rooms.

Meanwhile, the untitled sculpture in this room is refreshingly simple yet primitively complex at the same time. Although the materials used in it’s construction are relatively heavy handed and focus on practicality in their execution – replete with bolts and brackets – there is also a sense of unusual lightness of touch to the work that suggests a papercraft like construction as well as a complex mathematical-origami like aesthetic. Mammoth (1989) also deploys this same playful sense of symmetry, repetition and openness using aluminium ducting as material and the viewer’s movements as the activating agent.

This feeling of flowing, free expression of movement begins to take shape with Untitled (1981) which features a wonderful design that resonates with the speed of movement that Reinhold Spieldiener’s Thunder-Looper design from 1977 engendered. However, a different more sensuous thrill is suggested by the interlinking forms and glutinous resin seeping out from the laminating process that Deacon employed for this piece. Although Out Of Order (2003) in the final room similarly appears to fetishise the wood, metal and black paint material used in it’s making – it’s spiralling twists and turns for example conjure up the vertiginous leaps and bounds present in Mario Kart‘s Gold Mine course – the reading of the piece appeals for a more complex reading than a simple deconstruction of formalist elements. As the eye follows the outlines clothed in an outer black uniform, joined with metal buckles and teasing glimpses of smooth wooden ‘flesh’, one wonders whether Deacon is subconsciously exploiting the language of advertising, of communicating smooth lines and more complex sensuous energies, precisely as deployed in car advertising and something Elizabeth Price explored in the film User Group Disco (2009). It’s not overly dissimilar of course to the Ballardian fantasy of speed and twisted wreckage as depicted in David Cronenberg’s adaption of Crash (1996) but on the other hand this may be a personal attempt at assigning too much tangential meaning to this piece and a step too far as many other works assign an obviously deft lightness of touch!

Elsewhere, a key motif of Deacon’s output of the 80s appears to be juxtapositions between soft and hard forms whether displayed on a surface level such as in The Back of My Hand (1986) or Lock (1990) or when intimated through the settings the artist intended the sculptures to be displayed in such as in the series Art For Other People. Number 12 in the series is particularly engaging with its marriage of a hard marble form which would not look out of place in the British Museum collaged with ears of pink leather. Unfortunately the display suffers by the display not being presented as intimately as the artist would have intended (which gives the viewer a more reverential gaze than perhaps Deacon originally intended for these works) nonetheless the works do show the artist’s interests in the combination of mainly everyday materials and forms and an investigation in differing scale.

After (1998) is a personal highlight of the show and demonstrates an alchemy of nearly all the skills demonstrated in the other rooms. The twisting sinous interlocking forms with it’s nearly interlocking spinal ‘fingers’ appear to bounce and ebb along the ground in an eternal sine wave rhythm intersected by a latticed metal wall which gradually fades into almost nothing when viewed from the far end of the gallery wall. Absence and presence, revelation and obfuscation and the game of hide and seek are all brought to play here.

Although a genuine treat of a show while it lasts, the only real criticism is that the the journey felt over far too soon even when accounting for the final large scale glazed metal structure Fold (2012) displayed in the foyer outside. Perhaps a few more of his ink on paper works (exploring the Art For Other People series a little more) and video interviews with the artist -rather than the IK Prize booth that is currently installed there- would have been a more rewarding expansion on the artist’s life, thoughts and creative processes.