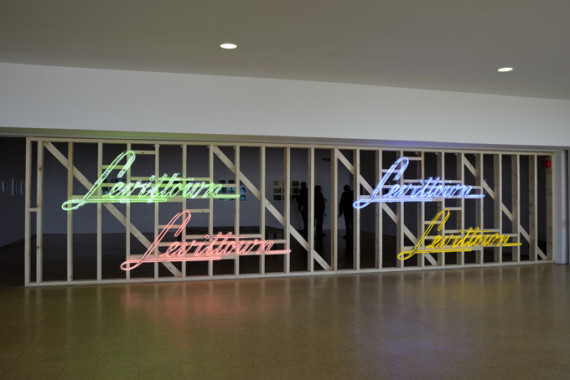 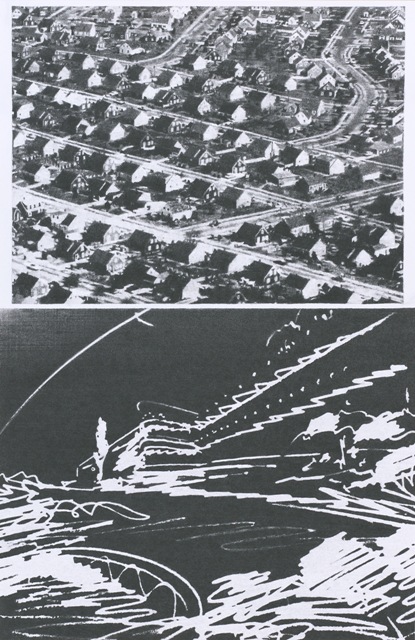 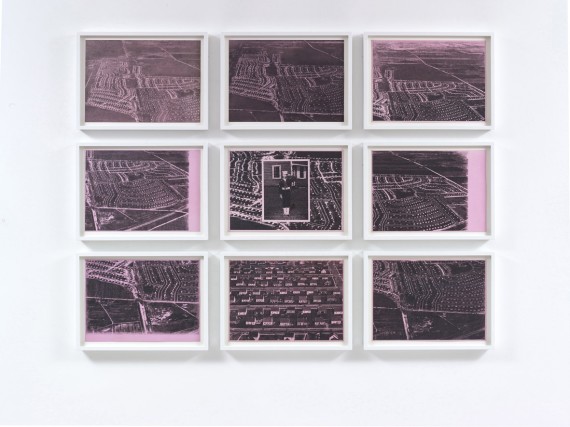 The installation, mounted on walls papered with ‘Recovered wallpaper (Ostalgie), 2016, monotone grey with a white lozenge pattern, examines, pokes and prods at the development of postwar suburban architecture in Levittown Pennsylvania, its conventional moralities and the faultiness generated, inhabited and entrenched by the design processes of mass production, consumerism and political, racial, and class, myth. This, in the USA, found itself reflected in a parallel move to commodity production in East Germany. In a period when need for housing was satisfied in part by a form of socialist state involvement in America through the GI Bill coincided with a need for  communist ideology to engage with the idea of  consumerism. Such ideological cross-dressing is demonstrated here by the  drawing of an advertisement for the East German Brabant car, whose logo typeface exhibits a family resemblance to Levittown’s own.

Levittown’s houses were initially available only to white purchasers, a policy of the Levitts built into the deeds of the properties ; access to mortgages for African Americans also was tightly restricted albeit less formally structured. ‘Levittown’s subconscious’ is an evocative piece in this context. Composed of two images, the upper portion is an aerial view of rows of houses running parallel to gently curving roads that end at T- junctions, the curve and the T-junction both implicit methods of direction and control in the  road planning. Tinted with a magenta wash, it echoes a sense of unease that infuses the works. Below it and spatially flat in contrast to the upper portion’s perspective a gunmetal grey rectangle is textured like a rubbing, a darker pattern reminiscent of grain revealed, and surface memories in the form of saw marks  created when timber is cut in the mill.

Richard Ingleby, in his essay ‘ Warm summer Days Indoors’ quotes the artist. ’I draw like this because it really suits me as a person, I realise that now.’  ( Richard Ingleby  ‘RICHARD FORSTER MODERN’  2014 p53) The notion that something ‘…suits me as a person….’ is an illustration of the apparent naturalness of being, deeper than the matter-of-fact manner of its saying. Levitt’s designing, racist policies, the oxymoronic benign banality of it all, the assumed decency  in  our misrecognitions, and our inherent contradictions, all of these suit those, personify, those in whom they are  embodied. ‘Levittown Variation:[email protected]’, is a drawing from an aerial view of Levittown above a Mendelssohn ( The De La Warr Pavilion was designed by Erich Mendelsohn and Serge Chermayeff and built in 1935) sketch for the De La Warr pavilion in which the installation sits. With markedly contrasting techniques, Mendelssohn’s fluid lines dance beneath Forster’s massed marks. Forster’s stubborn, persistent technique, visually intense, reflects,  through laborious reiteration of small closely packed tonal dots, the notion of return and its underlying insecurities; Mendelsohn’s fluid lines display a languid confidence – other to Forster’s nailed-down drawings. Here though, the notion of technique is rendered redundant; such drawings as these are lived – through – things, a kind of breathing, just as Levittown’s designs are breath of the American Dream.

‘Levittown variation: Google 1950’s advertisement’ shows a maturing Levittown, trees interspersed with the houses above a cropped section of advertisement. The product advertised is not directly indicated – almost any product would slot seamlessly into this message of  American domestic  contentment with mother at the cooker. Father, clearly a worldly and sensible man, newspaper under his arm, acknowledges her smile as the children excitedly search a bag for whatever surprise (which is not a surprise but expected) has accompanied his return to his slice of American Pie.  The image itself, both degraded and recreated by reproductive enlargement and pixellation, has aged, its message becoming something part vestigial as it is consumed and reconstituted by technological advance, reaching back with its aesthetic and forward with a now digital, dematerialised surface  rematerialised by the stuff of drawing. ‘Ostalgie’ is a term coined from ‘East’ and ‘nostalgia’, for a yearning for a return to some lost aspects of life under the past communist regime; the hope that suffuses ‘Colourful Kitchens, 1950s advertisement’ and the ‘ Levittown Variation; Google 1950s advertisement’, conversely, mirrors  a reverse nostalgia, projected into the future by the ideologies of the present, second-guessing any possibility of doubt.  In a reference to the song ‘Little Boxes’ which were ‘made out of Ticky-tacky’……and ‘…all look just the same.’ the four largest pieces, each made of nine framed images of a standard size, are named according to the month in which they’re made. there is a ‘…pink one and a yellow one, a green one and a blue one…’ albeit less poetically now as Green – September, Magenta- October, Cyan – November, Yellow – December. Central to each is an image of what might be a typically proud Levittown resident – a man standing next to his car, a young woman in her house, young man in a Sailor’s uniform saluting, a young woman outside her house.

Two drawings of a screwed up blueprint plan of ‘The Rancher floorpan. 4 July, 2015.’ one timed at 5.32 pm and the other at 10 32.am face each other across the gallery. The notion of the 4th July folds seamlessly into the plan; was it screwed up on that day?  Creased surfaces remain similar in each but modelled by an evident change in the direction of light. Is the precise point in time allocated to each the moment of beginning, the moment of ending, or some point in between? Were these drawings made from photographs taken at these times? What does the tonality of surface indicate? Each image made over a time period would necessarily involve the changing tonalities of a changing light, each then becoming a record of change, a kind of time-lapse drawing, as nothing ever remains the same. Or could each image have been made under controlled lighting conditions?  The drawings are both sign and experience, each dependent upon and independent of the other, in the same breath, as it were,  simultaneously, the one accessible analytically and the other aesthetically, mind and body, drawing as image and object and never completely what they might seem.

This duality runs throughout the installation, embodied by the use of horizontal compositional juxtapositions, the fierce physicality of drawing an idea, the underlying precariousness of the mark, and fear of loss. It asks how we can know, how do we experience. It gestures toward the (un)natural divisions of mind and body/content and form.