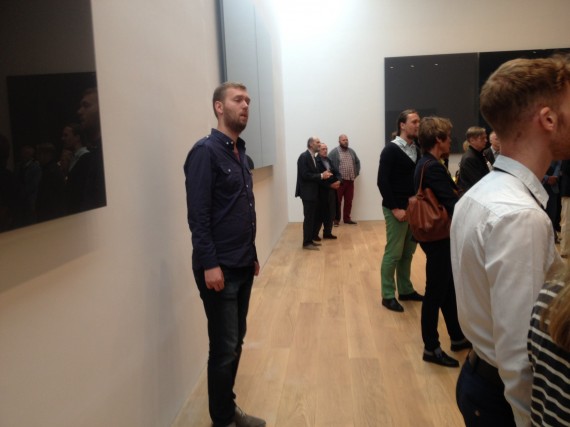 When I was just 18, a friend of mine introduced me to the music of Arvo Pärt. I was given a tape recording of ‘Fratres’ which I played incessantly until I lent the tape to another friend I thought would appreciate the music. Unfortunately the tape was lost and all I had was the vague memory of a name on the original album cover. The Internet was in its infancy, so an obscure Google search was not available and I had lost touch with the Friend who had made me the tape in the first place.

9 years later I was standing in my bathroom brushing my teeth listening to classical fm on a little radio when I heard one of the compositions from that haunting album of my youth. In my excitement I failed to catch the name of the composer or the title of the song but I did catch the djs quote from Benjamin Britten, who said the music was like ‘a Ghost passing through an empty prison.’

With this new information and my vague recollection of the name on the album cover, I began the obscure Google search that was not afforded me so long ago. I tried all kinds of variations regarding ‘Arv’ and ‘Prison Ghosts’ and ‘Benjamin Britten’ until eventually I found it! The Album was available to buy online, which I hastily purchased. Soon the music from ‘Fratres’ appeared in the soundtrack of ‘There Will Be Blood’ and later on the soundtrack for ‘Gravity’.

Now 8 years after that teeth-brushing revelation, Arvo Pärt is contributing to the Manchester International Festival through collaboration with Gerhard Richter at the Whitworth Art Gallery and also a choral arrangement at the Bridgewater Hall. I purchased a ticket for the Choral performance months ago, so since then I have been avidly listening to that album and other works by Pärt.

Last night I was getting an early night in preparation for what I thought would be the removal of a secondary cataract this morning. I played ‘Fratres For Cello and Piano’ and ‘Spiegel Im Spiegel’ to relax and send me off to sleep, as I have done sporadically for nearly 20 years.

At the Royal Eye Hospital in Manchester this morning I had my eyes dilated in order to assess the condition of my ‘Elschnig Pearls’, a condition found in post cataract patients of a young age. It turned out there would be no treatment that day and I was free to go with fully dilated eyes letting in all light of the morning. These dilating drops have always left me looking and feeling peculiar with wild black eyes and a fast beating heart.

Once outside in the glare of the sun, I thought it would be interesting to look at some art with this temporary visceral condition. The Whitworth Art Gallery is located right across the road from the Eye hospital so I ventured in. I struggled to look at the work with so much light flooding in to my head, causing me to blink and squint but I stuck around trying to get as much from the experience as possible before it wore off and the muted tones crept in once more.

After a little while I noticed there was group of people preparing to view the Arvo Pärt and Gerhard Richter exhibition I had previously been informed would open hours later. In that group was Arvo Pärt, Gerhard Richter, Hans Ulrich Obrist and Alex Poots, amongst many other great and good patrons and notable journalists.

With my dilated eyes and heightened state of consciousness I followed the group into the exhibition space. The walls played host to Richter’s response to Pärt with large glass coated photographs of abstract paintings and grey glass coated colour fields, reflecting all those in attendance with muted gloss. As the congregation responded to what they saw, choral voices rose up amongst us. The choir had mingled throughout the V.I.P crowd until the time had come to respond to Richter. I closed my eyes and let the sound take over from my sight of sight.

As we stood captivated by the gently flowing tones that draped over us, Pärt studied the ambience, moving amongst us, holding his hands in prayer in front of the choir, directing Richter to the best place to stand, in front of me. The old men stood beside each other, arms linked, in front of me, the choir embracing us, and the images surrounding and reflecting us all. The artist’s work complemented each others reflection upon shared histories of faith and atrocity.

Once the performance had concluded the crowd returned to conversing amongst themselves. I approached Pärt and leaning into his ear, told him I had been listening to his music since I was a young man and continued to listen to Fratres and Spiegel Im Spiegel each night. I told him it was an honor to meet him and shook his hand.

During all this, Alex Poots the festival director was standing at the other side of Arvo and what he saw was a six foot four Irish man with wildly dilated eyes approaching Pärt, talking in his ear. He quickly intervened and separated us explaining to me that Pärt was very frail or at least I think that was what he said. I graciously bowed out nodding my head with understanding.

After a brief moment Arvo Pärt broke away from the crowd he was with and approached me. He lifted his frail hands and gave me a double triumphant fist pump in the air. We smiled at each other and he walked away.

After that I bumped into the art journalist Alistair Sooke, who I had met at the previous International Festival. Alistair observably pointed out that I looked like I was on drugs. I explained the circumstances of my dilation and a brief history of my cataract story then left, realizing it was impractical to tell everyone in the room I wasn’t on drugs.

The Arvo Pärt /Gerhard Richter exhibition is opening tonight, Thursday the 9th of July at the Whitworth Art Gallery, part of MIF and ‘Case Studies’ featuring my artwork about cataracts opens tomorrow the 10th of July in the John Rylands Library, part of Manifest.